The Beginning of the End - Part 2

The Beginning of the End - Part 2 is the second episode of season nine of My Little Pony Friendship is Magic and the one hundred and ninety-eighth overall.[1] It is the second part of a two-part season premiere.

In this second part, Twilight Sparkle and the rest of the Mane Six struggle to come to terms with the destruction of the Tree and Elements of Harmony, and King Sombra sets his sights on conquering all of Equestria.

Rarity's line "Show me the muddy" was a non-scripted ad lib from Tabitha St. Germain.[2]

With both the Elements of Harmony and Tree of Harmony destroyed, King Sombra believes he has rid the Mane Six of their only means of defeating him. As Twilight Sparkle helplessly tries to reassemble the Elements from their fragments, her friends attempt to attack Sombra with physical force, but he effortlessly traps them in a cage of black crystals—impervious to Twilight's magic. With the Mane Six incapacitated, Sombra sets his sights of domination on all of Equestria, starting with Ponyville.

As Sombra leaves to take the ponies of Ponyville under his control, Twilight feels confirmed in her inability to take Celestia and Luna's place. Pinkie Pie cannot think of anything uplifting to say, and the other ponies worry about their Ponyville friends and families. Twilight, determined to save her loved ones from Sombra, starts to dig a hole under the cage. Inspired by her resolve, her friends join her, and they eventually succeed in freeing themselves from the cage.

In Ponyville, the Mane Six find all of their friends and families under Sombra's mind control, and Twilight's magic is not strong enough to free them. To make matters worse, vines from the Everfree Forest start to encroach upon Ponyville without the Tree of Harmony to keep them under control. Determined to save their loved ones and home, Twilight and her friends arm themselves with gardening tools and wage war on the creeping vines.

With his army of mind-controlled ponies, King Sombra lays siege upon Canterlot. When he makes his way to the castle and finds it abandoned, he assumes control of the thrones.

"Equestria is mine!"
— King Sombra

Back in Ponyville, the Mane Six continue to hold off the Everfree Forest's invading vines, but the vines grow faster than they can keep up with. All of a sudden, Princess Celestia, Princess Luna, and Star Swirl the Bearded arrive to help them with their efforts. Star Swirl, having felt the Tree of Harmony's destruction, had alerted Celestia and Luna, and he offers to keep the forest under control with the princesses while Twilight and her friends go to Canterlot and stop Sombra.

Twilight teleports herself and her friends to Canterlot's city limits, where their mind-controlled friends and families block their entry into the city. The ponies cannot bring themselves to fight back against their loved ones, instead trapping them in nets and turning their force on each other.

When the mind-controlled forces overwhelm the Mane Six, Twilight teleports herself and her friends into the castle. There, the ponies find Discord free of Sombra's control. Without any other means of fighting Sombra, Twilight begs Discord to help them defeat him. Discord agrees, despite his misgivings about doing the ponies' work for them, and they fight past Sombra's brainwashed legion.

Finding the magic within

In the castle throne room, Sombra creates black crystals all around the room. When the Mane Six and Discord enter to stop him, Sombra blasts at them with his magic. While Discord is easily able to fend off Sombra's blasts, he expresses further his hope that Twilight and her friends would defeat Sombra on their own. When Discord states Fluttershy is his favorite among the Mane Six, Sombra aims his magic directly at her, and Discord jumps in the way, taking the full brunt of the blast and falling.

With Discord seemingly defeated, Sombra believes he has truly won. Discord, drained of his power and barely conscious, tells the Mane Six they do not need him, the princesses, or the Elements of Harmony to defeat Sombra. He says the six of them will always embody the virtues of harmony they each represent, and as long as they stand together, they will always triumph. As Sombra laughs off Discord's sentiment, the Mane Six stand firmly united against him, inspired by Discord's words.

Sombra barrages the ponies with magic, but Twilight matches him blow-for-blow, saying no matter how many times they are knocked down, she and her friends will keep getting back up again and again. During Twilight and Sombra's final clash, Twilight joins hooves with her friends, and the magic within them ignites similarly to the Elements of Harmony from their resolve to protect Equestria. With a declaration of "friendship is magic!", the Mane Six's magic eradicates Sombra to dust, dispels his black crystals around the land, and frees the mind-controlled ponies from his spell.

The power of teamwork

Celestia and Luna enter the throne room to find the Mane Six nursing Discord back to health. Twilight fears the princesses are disappointed that she did not alert them about Sombra right away and believes she is unfit to rule Equestria. However, Celestia remarks that a good leader knows when to ask for help, but a great leader has the courage to admit their mistakes and the strength to make up for them.

While the princesses believe Twilight has proven she possesses these qualities, they admit that they unfairly put too much pressure on Twilight all at once, and they decide to continue ruling Equestria until Twilight is truly ready to take their place. Twilight is immensely relieved by the princesses' decision, but Discord is upset, revealing he merely pretended to be hurt during the battle against Sombra in order to inspire the Mane Six to defeat him. Regardless, the Mane Six are reminded of how much of an unstoppable force they are when they stand together.

Meanwhile, back at Grogar's lair, Cozy Glow tries to foster teamwork between herself, Lord Tirek, and Queen Chrysalis. When Grogar enters, he shows them the moment of Sombra's defeat with his crystal ball, and he uses Sombra's hubris as an example to secure Tirek, Chrysalis, and Cozy's loyalty.

Pinkie Pie: What are you looking at me for?
Rainbow Dash: This is usually when you say something funny to lift our spirits.
Pinkie Pie: Sorry. Nothing about this is funny to me.

Rarity: Normally, I wouldn't dream of digging, but right now, show me the muddy!

Twilight Sparkle: [to Discord] I'm so glad you're okay! We can't beat him without you!
King Sombra: You couldn't beat me with him, either!

Fluttershy: For our friends!
Applejack and Rarity: For our families!
Pinkie Pie and Rainbow Dash: For our home!
Twilight Sparkle: For Equestria!

King Sombra: [grunts] No! This can't be possible! Your magic can't defeat mine! I destroyed the source of your power!
Twilight Sparkle: You can't destroy our friendship, Sombra!
Rainbow Dash: And we keep telling bad guys.
Applejack: But y'all just don't seem to remember.
Mane Six: Friendship is magic!

Rainbow Dash: That's Discord for ya.
Applejack: He sure has a weird way of bein' supportive.
Pinkie Pie: Super odd dude.
[magic zap]
Discord: I heard that! 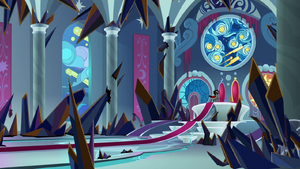 The Beginning of the End - Part 2 image gallery