The Best Night Ever is the twenty-sixth and final episode of season one of My Little Pony Friendship is Magic. In this episode, Twilight Sparkle and her friends attend the Grand Galloping Gala, but none of their experiences meet their expectations, much to their disappointment.

According to this episode's writer, Amy Keating Rogers, the show's scripts are generally 33 pages long, but her first draft of this episode was 39 pages.[2] Some additional songs were written for the episode, but they were cut for time.[3] A longer version of Piggy Dance, to the "Chicken Dance," was one of these songs and would have come before the Pony Pokey.[4][5][6]

A picture referencing this episode appears in the game My Little Pony Friendship is Magic: Discover the Difference, which set its debut on Hubworld two weeks before the episode's premiere. The image shows the ponies wearing the dresses from Suited For Success, seated around a modest table with a plate of half-eaten donuts and they appear untidy.

The designs of the "fancy band" Pinkie Pie spots on stage are later used in Luna Eclipsed, wearing scarecrow costumes and colored differently. Their instruments are different, but of related classification: the grand piano is replaced with an upright piano, the brass instrument with a harmonica, the bowed instrument with a fiddle, and the harp with a banjo.

Brian Drummond voices both of the stallion ponies pulling the carriage.[7]

Pinkie Pie's Piggy Dance song was originally intended for this episode, but was cut off due to time.​[​citation needed​]​ However, the song was used for the season 2 episode Baby Cakes instead.

This episode was #3 in the We Heart Ponies Fan Favorite Mare-a-thon in the leadup to Hearts and Hooves Day.

Preparing for the Grand Galloping Gala

The episode opens with Canterlot's Grand Galloping Gala about to begin. Pinkie Pie is jumping excitedly and humorously uses a trampoline to show her enthusiasm while Twilight Sparkle is learning a new spell. Rarity comes by to stop Pinkie, not wanting the pink pony's dress to be stained with sweat. Once Applejack, Fluttershy, and Rainbow Dash meet up with the rest of the ponies, Twilight casts her latest spell, transforming an apple Spike places on the ground into a carriage to take them to the Gala. She proceeds to turn a group of four mice that Fluttershy had brought with her at Twilight's request into horses to pull the carriage. The spells are a near perfect success, except the horses' faces still had mouse whiskers. Thanks to Opalescence, however, the "horses" are scared away. With some eyelash batting, Rarity convinces two of her stallion neighbors, Caramel and Lucky Clover, to pull the carriage instead. As they get into the carriage, Spike is already making plans to show Twilight's friends the highlights of their hometown. They all say they will be busy but promise to hang out with him later.

As the seven friends finally enter the castle grounds, the Grand Galloping Gala is already underway. The ponies sing The Gala Song, revealing what they want to do during the night. After the song, the excited ponies split up in order to make their dreams a reality, leaving Spike in the dust.

Twilight Sparkle meets with Princess Celestia, who invites her to be by her side the whole night so they can talk. Rarity lays eyes on Prince Blueblood and pursues him. Fluttershy follows the beautiful sound of a stray meadowlark into the private gardens.

Applejack opens up her booth, filled with all kinds of apple snacks, and quickly sells her first item, an apple pie, to a Wonderbolt named Soarin. On the way to the dining areas, Soarin drops the pie and Rainbow Dash dives to save it. Recognizing her from Cloudsdale's competition, the Wonderbolt known as Spitfire asks her to hang out with them in the VIP section. Pinkie Pie arrives in the ballroom and is instantly taken in by the shiny floors, the guests, and the band.

Pinkie Pie sings and dances in her usual fashion, expressing her love for the Gala. However, she sees that all the attention she is getting is far more strict and stern than she had anticipated, and she awkwardly becomes quiet.

Rarity finally meets her dream pony, Prince Blueblood. After introducing herself, she finds a rose in the royal garden and points it out to him. Instead of offering it to Rarity, he places it on his own suit, claiming that it compliments his eyes.

Meanwhile, in the gardens, Fluttershy quickly follows the melody, but it leads her to Mr. Greenhooves, an elderly groundskeeper who simply loves to whistle while he works. She apologizes for interrupting and flees in the opposite direction before finally spying some exotic animals. She approaches them, only to see them scurry off. The Pegasus blames herself for being such a "loudmouth" and once again tries to befriend them, but no matter how polite or quiet she is, she cannot get close to any of them.

Rainbow Dash is not faring much better, as her idols are too busy talking to other party-goers to pay attention to her. Twilight attempts to converse with Celestia, but despite the Princess's best effort to do so, the endless line of guests requires her attention. At the apple stand, Applejack has only sold one item, the apple pie to Soarin, throughout the entire episode up until this point. Refusing to give up, the girls make a vow.

Livening up the party

Rather than wait to talk to the princess, Twilight instead joins in greeting the arriving guests, but she quickly grows tired from constant hoof-shaking. Pinkie Pie decides to liven up the party by any means necessary, convincing the orchestra to play a rendition of the Pony Pokey. Dash decides to perform a few more tricks, starting by staging a save, for The Wonderbolts to see.

Rainbow butts an unsuspecting party guest in the air and just as fast catches him, but still she fails to attract the attention of The Wonderbolts. Meanwhile, Applejack uses some of her apples to stumble a party participant. Helping him up, Applejack offers him some of her food, but the victim refuses. Rarity keeps her composure, hoping to see Blueblood's chivalrous side. Blueblood stops her from stepping into a water puddle. Despite her expectation that he lay his coat over the puddle for them to cross, he uses her scarf instead. As they reach the exit, she implies that Blueblood open it, but he turns his nose in the air and Rarity is forced to open it. In the garden, Fluttershy tries patience in the hope that the animals will come to her, but eventually she resorts to setting traps for them. Even that fails.

As the gala continues, Rarity and Blueblood approach Applejack's booth outside. Rarity orders two apple fritters. Disappointed once more when the Prince expects her to pay for the food, Applejack intervenes, giving them the fritters on the house. Upon tasting the fritter, Prince Blueblood quickly spits out the food after realizing that his royal lips touched "common carnival fare" and returns to the party for food of his preferred tastes. Rarity scowls at Blueblood's denouncement of her friend's perfectly good wares.

The worst night EVER!

Applejack realizes that everyone is eating hors d'œuvres rather than her apple treats, and as an attempt to "dress-up" her fare, she decides to cart a cake into the ballroom and sell it there. Pinkie Pie, in her continuous attempts to add flair to the boring festivities, accidentally stage-dives into the cart and flings the cake into the air. The cake flies right towards Blueblood, who uses Rarity as a shield to keep himself from being hit by it. Rarity finally loses her temper and shakes off the cake pieces onto Blueblood. He retreats and accidentally bumps into the room's centerpiece statue, which begins toppling over. Rainbow Dash tries to use this opportunity to get noticed by The Wonderbolts and successfully catches the statue. Unfortunately, she can't balance it and it bumps into one of the ballroom's stone columns. It topples over and takes down the rest of the columns with it. When the dust settles, the centerpiece statue cracks and breaks.

As Celestia and Twilight enter the ballroom and see the destruction, Twilight resignedly comments that things cannot get any worse. At that moment, a stampede of the royal gardens' animals bursts through the door with Fluttershy behind them, enraged and ordering the animals to love her. With the ballroom in absolute chaos, Celestia has only one word of advice for her student, "Run," prompting Twilight to call for her friends to follow her. On the way down the stairs, Rarity drops one of her glass slippers. Pinkie observes that Rarity's "prince" will be able to find her. But she doesn't want anything to do with him, so she crushes the glass slipper and runs off with Pinkie Pie.

Meanwhile, a dejected Spike demands another doughnut while sitting at the empty counter of his favorite doughnut shop. Twilight and her friends, in their tattered gala dresses, walk in through the door. They are greeted by the server, Pony Joe, who remarks to Twilight, "Long time no see." Around a table with a large plate of donuts, the ponies tell Spike the story of their night, prompting him to comment, "That sounds like the worst night ever," to which they all reply, "It was," with laughter. Twilight says she hopes that Princess Celestia isn't upset with them for ruining the party. Celestia enters the doughnut shop right then with the announcement that the night has been the best Gala ever, informing the ponies that the Grand Galloping Gala is "always awful," which is why she hoped Twilight and her friends' involvement would liven things up. The ponies conclude that being together made a horrible night into the best night ever (and appeared to have apologized to Spike for not including him in the event).

Rarity: Heavens no! We're getting dressed!
Applejack: Dressed? Uh, beg pardon Rarity, but, uh... we don't normally wear clothes.
Rarity: [moan] I'm sorry, Spike. Some of us do have standards.

Spike: Great! Cause I planned out my insider's tour of Canterlot. I've gotta show Rarity the crown jewels. And Applejack the Princess's golden apple tree. And Pinkie, we gotta go to my favorite doughnut shop.
[excited chatter inside carriage]
Spike: Then let's get moving! Hyah!
Caramel: Excuse me?!
Spike: Um... I...
Lucky Clover: If you weren't friends with our neighbor Rarity... Hmph.

Twilight Sparkle: I can't believe we're finally here! With all that we've imagined, the reality of this night is sure to make this the best night ever!

Applejack: First minute, first sale. Second... Fourth... Sixth... Sixtieth minute... no sales. [sigh] This ain't what I expected at all.

Pinkie Pie: I'm at the Grand Galloping Gala... and it's not what I dreamed.

Rarity: This isn't at all what I imagined.

Twilight Sparkle: This isn't what I hoped.

Rainbow Dash: This isn't hanging out.

Fluttershy: This isn't what I wished for.

Lyrica Lilac: Young lady, this is not that kind of party!
Pinkie Pie: Ooooohhhhhh... They don't want to "party." These ponies want to PAR-TAY!

Fluttershy: I'll catch you yet, my pretties... Oh yes, as soon as one of you little birds, or monkeys, or bears touches this net... you'll be mine! MINE! [evil laugh] Whoa!

Rarity: Afraid to get dirty?!

Fluttershy: You're... going to LOVE ME!

Pinkie Pie: Ooh! Rarity, your glass slipper! Now your prince is sure to find you.
Rarity: [shriek] No! Ugh! Let's go! 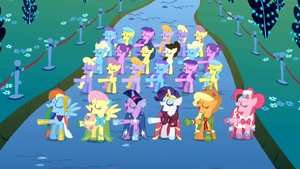 The Best Night Ever image gallery