Preparing for the Gala

It's hard to read when this is happening.

Rarity isn't liking what she notices.

She's got an awesome magic spell she's been working on for the Gala.

Where are the others? It's getting late.

I can do this!

Are we having pie?

Even Rarity wishes she could do that.

Her mane is a mouse nest?

They are gonna be okay, right?

Looks like Twilight's friends don't quite get it yet.

Opal looks a little too happy.

Opal. Those are horses not mice.

"Those Horses were supposed to pull our carriage"

You say that as if Horses are hard to come by

Rarity has a back-up plan.

Rarity recruiting other ponies to pull the carriage.

Rarity in her happy state.

Rarity has her ways and charm.

"Oh yeah...right"
Add a photo to this gallery

Pinkie Pie goofing around as usual.

But we're not dressed!

"Some of us DO have standards"

Rainbow Dash looks awesome in this pic, don't you think?

Those fake eyelashes seem to pretty straining to apply.

Oh, okay. You guys have fun then.

We'll all get to spend time together.

Great!
Add a photo to this gallery

Spike can hear the eagerness of the ponies.

Spike is the chauffeur.

The ponies talking inside the carriage.

"If you weren't friends with our neighbor, Rarity...Huh!"

Will the carriage even fit that bridge?

Canterlot in all of its glory.

Exterior view of Canterlot at night.

"You all look amazing!"

Observatory! To look upon the skies, for the Princess.

Fireworks in the night skies of Canterlot.
Add a photo to this gallery

Twilight on her Gala dress

Twilight and the choir singing

Fluttershy has the first solo.

"All the creatures, I'll befriend them at the Gala!"

"All the birdies, and the critters..."

"They will love me big and small!"

"They will meet fair Rarity."

"And how gallant he will be."

"He will treat me like a lady tonight at the Gala!"

Each of us will live our dreams.

"Been dreamin' I've been waitin'."

"To fly with those great ponies."

"They'll shower us with diamonds."

Pinkie leaping high in the air.

Pinkie Pie on her Gala dress.

Pinkie wants to have the best party ever!

"With me at the Grand Gala"

Pinkie Pie singing with her choir.

"It is going to be so special."

This will be the best night...

Twilight and her choir head for the gala.

Into the Gala, let's go in

And have the best night ever

The main cast of characters marching together in the musical number.

The castle in Canterlot.

Fireworks, shooting from the castle.

The main 6 take off, leaving Spike confused and alone

Spike all alone.
Add a photo to this gallery

This hallway lacks the use of security from the Canterlot guards.

Twilight and Celestia meet once more.

I'm glad I could make it.

Twilight at Celestia's side.

Happy to be by her mentor's side.

Hey there, don't let this face fool you.

Rarity following the Prince. Fine Line and Shooting Star are talking in the background.

This is even better than I thought.

"I think she's calling to me."

"This is exactly what I've wished for!"

Singing for the Meadowlark

She hears the Meadowlark respond

Moving her stand to where there are ponies around.

Food all set up.

"In the first minute, I made my first sale. Just like I expected."

Happy about her first sell.

Soarin making his way back to the VIP place.

No time to waste

Dash for the rescue!

The pie has been saved,thanks to Rainbow Dash!

Wow, he wasn't even this happy when she saved his life

Walking away with his pie.

Wanna come hang out with us?

Rainbow's about to enter.

Rainbow having a bit of a fangirl moment.

Pinkie dancing at the Gala.

"Nobody grooves/Like the girls with the hooves..."

Dancing on a statue...

..Put your hooves up in the air!

Huh colt. This is gonna be one of THOSE gigs, isn't it? 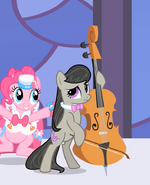 Octavia Melody, do I have to deal with this?

Singing at the top of her lungs.

"It's all I ever...dreamed?"
Add a photo to this gallery

Not what they've expected

"Well, hello. I am Prince Blueblood."

Fluttershy eager to find the whistler.

My little meadowlark is right around this bend!

Yup! I love whistlin' while I work!

I must meet them.

Why do I have such a loudmouth?

"Oh, Fluttershy. You're such a loudmouth."

Ponies minding their own business.

Dash getting through a crowd

Trying to get Spitfire's attention.

Determined to get the Wonderbolts' attention.

"This ain't what I expected at all."

"I'm at the Grand Galloping Gala... and it's not what I dreamed."

Who will take the last seat?

"This isn't at all what I imagined."

"This isn't hanging out."

"This isn't what I wished for."

"The best night ever!"
Add a photo to this gallery

I think I got something.

The gardener eating the carrot.

"Sounds good to me!"

Dashie gets an idea.

"I'm sure the Wonderbolts will see me now."

Sure, this seems like a gentlemanly gesture, but don't hold your breath.

I know he must have a charming side.

Just look at those eyes, he's such a fool.

If you wouldn't mind.

This colt is not a gentlepony.
Add a photo to this gallery

Ooh, I got a great idea!

Telling her plan to the piano player.

Pinkie gives the orchestra the cue.

They begin to play the Pony Pokey.

Apples are on the way.

Applejack helps him to get up

Two of the Wonderbolts chatting.

Rainbow almost gets their attention

They are taken away

I gotta do this!

If you would insist..

I said you do it! Understand me, Blueblood?!

Rarity is so shocked at Blueblood's behavior, her tiara disappears!

Fluttershy is having a hard time.

I am so frustrated!

Where are you, you little squirrel??

He hits a much higher chord on the ivories...

Pinkie plays Octavia's instrument for her.

"Young lady! This is not that kind of party!"

"They don't want to "party." These ponies want to PAR-TAY!"
Add a photo to this gallery

The worst night ever

They almost look like a cute couple, don't they? ...Almost...

About to take a bite..

I'm going to the buffet for some hors d'oeuvres.

"Well, no wonder nopony wants my food. They're fillin' up on those fancy-schmancy vittles. Well, my down-home apples are plenty good enough for this crowd. I'll just dress 'em up a bit and prove it to 'em."

If critters run away, MAKE 'EM COME AND PLAY!

Trapped in her own net.

Dreams can shatter though.

Personal space? Never heard of her, but she's welcome to dance too!

The poor pony getting thrown away.

How did you get over there?

"Okay, all you high-class ponies. Here's a highfalutin apple cake for your hoity-toity taste buds."

These ponies will eat them, I'm sure.

This won't be good.

A cake is on its way

She had it with this so-called Prince.

Did you know that you're a horse's rear end, Blueblood?

You, sir, are the most UN-charming prince I have ever seen!

In fact, the only thing "royal" about you is that you are a royal PAIN!!!

Stay back! I just had myself groomed!

Afraid to get dirty?

Here have some cake!

He can't stand being dirty.

The crowd and The Wonderbolts are stunned.

Do you even lift?

Watching as the chaos unfolds...

...which causes this to happen.

Well, that squirrel won't be stealing any more birdseed...

I want another one!

Spike needs to watch his sugar

I get what I want!

That was a wild night

How was your best night ever?

She's not the slightest upset.

Spike and Applejack sharing a giggle.

A wonderful group of friends, and Princess Celestia.

Just your usual doughnut party with an Alicorn.
Add a photo to this gallery
Retrieved from "https://mlp.fandom.com/wiki/The_Best_Night_Ever/Gallery?oldid=2163125"
Community content is available under CC-BY-SA unless otherwise noted.