My Little Pony Friendship is Magic Wiki
Register
Don't have an account?
Sign In
Advertisement
in: Pony Life episodes
English

The Best of the Worst

The Best of the Worst (Parts 1 and 2) is the second episode of My Little Pony: Pony Life.

In this episode, Rainbow Dash's competitive spirit is put to the test when a new pony challenges her to a contest unlike any other, culminating in a loser-take-all race to prove which pony is truly the worst.

The episode begins with Rainbow Dash having just won a racing trophy; when asked by little Smallfry what her secret to winning is, she says hard work, natural talent, and a desire to be the best, adding that she does it for her fans, not the trophies. When she goes to Sugarcube Corner, she finds Pinkie Pie putting her picture on the "Employee of the Month" wall (even though she does not work there).

A pony named Dishwater Slog challenges Rainbow Dash to a "fail-off", in which the objective is to be the worst instead of the best. When Rainbow questions why she would take part in such an odd challenge, Dishwater stokes her competitive spirit, and she accepts. In accordance with Dishwater's terms, the two will be judged in contests of athleticism, creativity, and emotions.

In the first contest of athleticism, Rainbow Dash lifts up a large building while Dishwater Slog struggles to pick up a tomato can, making Dishwater the winner. In the second contest of creativity, Rainbow decorates a cake as poorly as she can, but Dishwater scrawls a terrible drawing on Pinkie's "Employee of the Month" photo, and he wins again. When Rainbow Dash starts to gets angry, Dishwater warns her to control her emotions or else she will lose the third contest.

In the third contest of emotional restraint, Rainbow Dash tries to keep a straight face as Fluttershy tests her resistance to cuteness and Applejack tests her resistance to rage. When it appears as though Rainbow might win, Dishwater Slog trips Smallfry to the ground and makes him cry when he comes running up. This gets both Rainbow Dash and Fluttershy angry, but Dishwater is unfazed, taking pride in being the worst.

Rainbow Dash gets an idea, and she points out that Dishwater is being the best at being a jerk in his callousness toward Pinkie Pie and Smallfry. Though this was not a criteria of her competition with Dishwater, Rainbow considers the score to be tied, and Dishwater challenges Rainbow Dash to a loser-take-all race at sunset as the tie-breaker. Rainbow Dash fears she will be unable to lose a race, even with the help of Pinkie's potions, and her friends question why she would want to go against her very nature of being a winner.

That evening, Rainbow Dash and Dishwater Slog begin the final contest of their competition. When the race begins, the two of them crawl their way around the course in order to get the other to cross the finish line first. When Rainbow hears Smallfry cheering for her, she decides to stop defying her winning nature, and she races to the finish at top speed. Though she lost her competition with Dishwater Slog, she still feels like a winner, and she reminds herself that she does what she does for fans like Smallfry, not for personal glory.

Rainbow Dash: Of all the things I'm good at, my favorite is being friends with all of you!
Twilight Sparkle, Fluttershy, Rarity, and Applejack: Awwww!

Dishwater Slog: I am Dishwater Slog. And I hereby challenge you to a fail-off! When it comes to being the worst, you've got nothing on me.

Rainbow Dash: You'll rue the day you ever challenged Rainbow Dash! The brash! The crash! The... mustache.

Applejack: About the worst she's ever been is when she forgot to give me back the book I lent her.

Applejack: Flying is overrated! There are too many colors in the rainbow! You still haven't returned my book!

Rainbow Dash: By the way, Applejack, here's your book back. Loved the symbolism!
Applejack: You really are the best.
Twilight Sparkle: Ooh! I've been meaning to read that one!
Dishwater Slog: I've already read it. Let me spoil the ending. 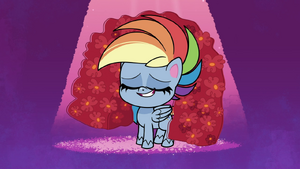 The Best of the Worst image gallery