The Big Mac Question is the twenty-third[1][2] episode of season nine of My Little Pony Friendship is Magic and the show's two hundred and nineteenth episode overall.[3] The title is a reference to the saying "the big question", which is often used as a euphemism for a marriage proposal.

When Big McIntosh and Sugar Belle decide to propose to each other, everything their friends do to help ends up making a mess of the whole thing.

This episode was originally scheduled to air on September 21, 2019 on Polish channel MiniMini+, but was replaced with a rerun of an earlier episode. However, it was still released the following day on the nc+ GO on-demand service.

The scene of Lyra Heartstrings and Sweetie Drops proposing to each other was animated by Morgan Shandro.[4]

The episode begins with Spike, Discord, Mrs. Cake, and the Cutie Mark Crusaders all explaining to an off-screen character about a crisis that recently occurred in Ponyville. Beginning from Spike's point of view, the story flashes back to some time prior; on a hill overlooking Sweet Apple Acres, Big McIntosh shows Spike and Discord an engagement ring that he plans to give to Sugar Belle when he asks her to marry him.

As part of his elaborate marriage proposal, Big Mac is putting together a romantic hilltop meal on a picnic table similar to the shelf he made for Sugar Belle in Hard to Say Anything and leaving apples with messages tied to them around Ponyville inviting Sugar Belle to the hilltop. While Big Mac finishes building the table, Spike volunteers to get the picnic food while Discord leaves the apples around town.

Outside Sugarcube Corner, Spike tells Discord to carefully leave apples around town for Sugar Belle to find while he gets food from Mrs. Cake. All of a sudden, Sugar Belle and the Cutie Mark Crusaders come out of the bakery and run past them. Inside, Spike finds Mrs. Cake frantically baking twenty-one desserts and placing a piece of paper in each one for a mysterious reason. When Spike offers to help Mrs. Cake complete her task faster with his message-delivering fire breath, he accidentally sets all the desserts on fire.

Discord tries leaving an apple with a message attached for Sugar Belle to find, but Sugar Belle does not notice. In an attempt to be more direct, Discord brings all the apples to life and instructs them to go to their designated locations and verbally deliver their messages to Sugar Belle. As a result, all of Ponyville quickly devolves into chaos as the living apples terrorize the ponies in their mission to deliver their messages.

Spike confronts Discord over the trouble he has caused, and when Sugar Belle wanders into town during the chaos, Discord transports her to Sweet Apple Acres. Upon realizing Big Mac is not there, he blindfolds Sugar Belle and brings her back to Sugarcube Corner, where Spike, Big Mac, and Mrs. Cake have gathered. Before Big Mac can chew out Discord for nearly ruining his proposal plans, the Crusaders and Granny Smith suddenly appear being followed by a giant monster.

The story then shifts to the Cutie Mark Crusaders' point of view; while Spike and Discord help Big Mac with his proposal plans, the Crusaders and Mrs. Cake help Sugar Belle, who also has plans to ask Big Mac to marry her. As part of her proposal, Sugar Belle is making twenty-one desserts and putting part of a proposal message in each one, and she instructs the Crusaders to deliver an extra dessert to Big Mac with an invitation to Sugarcube Corner inside.

When Sugar Belle and the Crusaders notice Spike and Discord outside the bakery, they quickly run past them before they realize what is going on. The Crusaders head to Sweet Apple Acres to find Big Mac, but he inadvertently eludes them while building the picnic table. When Big Mac finishes building the table, he waits for Sugar Belle to arrive. When she takes too long to appear, Big Mac heads into town to look for her.

After searching for Big Mac all around town and failing to find him, the Crusaders return to the farm and ask Granny Smith where he is. As Granny goes into detail about the strange dream she woke up from, a giant apple monster—formed when all the apples Discord brought to life merged into one—appears before them. The monster chases them to Sugarcube Corner, where Spike, Discord, Big Mac, Mrs. Cake, and Sugar Belle have gathered.

With the episode's two storylines now together, the giant apple delivers Big Mac's "will you marry me?" message in front of Sugar Belle, causing his surprise to be ruined. As Mrs. Cake chews out Spike for ruining Sugar Belle's proposal plans and nearly everyone casts blame on Discord, Big Mac and Sugar Belle go off on their own.

Big Mac and Sugar Belle walk together to the apple and pear trees that were planted by Big Mac's parents. Big Mac apologizes to Sugar Belle for everything that happened that day, comparing the day's disaster to what happened in Hard to Say Anything and The Break Up Break Down.

However, Sugar Belle recalls Bright Mac and Pear Butter's story and the hardships they faced trying to be together, and she is certain that just as Big Mac's parents survived everything they went through together, so too will she and Big Mac. With that, both Big Mac and Sugar Belle propose to each other, and they both answer yes, much to the delight of the friends that tried to help them throughout the day.

The story shifts back to present day, and it is revealed the off-screen character that Spike, Discord, Mrs. Cake, and the Cutie Mark Crusaders were speaking to is Applejack, who is moved to tears after hearing their story. With their explanations over, the ponies gather for Big Mac and Sugar Belle's wedding, with all their friends and family in attendance and Mayor Mare as the officiant. The mayor declares them husband and wife, and Discord celebrates the occasion with more of his living apples.

Apple Bloom: You'd think we would be used to stuff like this in Ponyville.
Sweetie Belle: I still have nightmares.

Discord: Don't be such a drama dragon. I've precipitated liquid cocoa on Equestria and herded long-limbed Leporidae. I can certainly make a pony see an apple.

Mrs. Cake: Did I add the sugar to this one or to that one?
Scootaloo: I think I've seen her add sugar to that bowl six times so far.

Discord: This whole story is being twisted to make it seem like it was all my fault. Which it wasn't!

Spike: So the messages that were in the desserts...
Mrs. Cake: ...were Sugar Belle's proposal to Big Mac before Spike set them on fire!
Discord: Oh, so I'm not the only one who messes things up, am I, Mr. High-and-Mighty Dragon?
Spike: Hey! Those desserts were ruined way before I ruined them!
Mrs. Cake: They were not! Well, I... may have mixed up a... a few ingredients. It was such a rush.
Discord: You should both be very disappointed in yourselves.
Scootaloo: What about you and your apple monster?!
Discord: Yes, but you all expect that of me.
Apple Bloom: All we wanted to do was make up for messin' things up the last time. Sugar Belle, Big Mac, we're really—
Sweetie Belle: Where'd they go?
[beat]
Discord: Okay, this time, it really wasn't me! 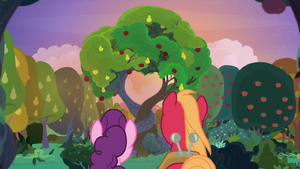