The Break Up Break Down

The Break Up Break Down is the tenth episode of season eight of My Little Pony Friendship is Magic and the one hundred and seventy-ninth overall.

In this episode, Big McIntosh has romantic plans for Sugar Belle on Hearts and Hooves Day, but he overhears her tell Mrs. Cake she's planning to break up with him. Meanwhile, the Cutie Mark Crusaders try to find out who Sweetie Belle's "secret admirer" could be.

According to story editor Nicole Dubuc, the story point of Sugar Belle's name being mistaken for Sweetie Belle's was inspired by one of the show executives accidentally writing "Sugar Belle" instead of "Sweetie Belle" in the production notes.[1]

Also according to Dubuc, Mrs. Cake's line "Save your mix-up for cake batter – that's what I always say!" was shortened for time to exclude, "Don't actually get to say it very often, though."[2]

A pie for Sugar Belle

The episode begins with Big McIntosh baking a pie for Sugar Belle for Hearts and Hooves Day. Impatient with how long the pie is taking to bake, he and Spike summon Discord to bake it faster, pretending to have summoned him for a Guys' Night of Ogres & Oubliettes. Discord takes offense to having his great powers be used for such ordinary tasks and dismisses Hearts and Hooves Day as a commercialized farce, but he helps anyway out of sympathy for Big Mac.

After the pie is finished, Spike explains to Discord that Big Mac has a romantic Hearts and Hooves Day dinner planned for himself and Sugar Belle and that they baked an invitation directly into the pie inviting Sugar Belle to the barn at sunset. Discord is still dismissive of the notion of love, but Spike knows how he truly feels, considering all the time he spends at Fluttershy's tea parties.

While Big Mac goes to mail the pie to Sugar Belle, Spike challenges that he can prove the splendor of love to Discord before the end of the day, and the loser has to mow Discord's lawn for eternity. Big Mac brings the pie to the post office to be delivered to Sugar Belle's village, but her name on the package gets smudged.

As the Cutie Mark Crusaders decorate the barn for Big Mac's surprise dinner date with Sugar Belle, Sweetie Belle and Scootaloo lament not having special ponies in their own lives. Suddenly, Big Mac's package is delivered to the barn's front door. Because of the smudged name on it, only the "Belle" part of Sugar Belle's name is legible, causing Sweetie Belle to believe the package is intended for her. Upon seeing the heart-shaped pie inside, the Crusaders think Sweetie Belle has a secret admirer.

Meanwhile, Spike shows Discord all the happy couples in Ponyville spending Hearts and Hooves Day together, but Discord still refuses to believe in love and just wants to play Ogres & Oubliettes. Just then, they notice Sugar Belle meeting with Mrs. Cake at Sugarcube Corner, appearing to have her own surprise planned for Big Mac. Fearing her surprise plans will interfere with Big Mac's, Spike and Discord return to Sweet Apple Acres and tell him to keep Sugar Belle busy until the barn decorations are finished.

On his way to meet with Sugar Belle, Big Mac overhears her talking with Mrs. Cake and hides in the bushes. He hears Sugar Belle mention wanting to talk with Big Mac about not needing to visit her at her village anymore, Mrs. Cake telling her to "be honest with him", and Sugar Belle saying "we're finished". From this, Big Mac reaches the heartbreaking conclusion that Sugar Belle plans to break up with him.

At Sweet Apple Acres, Big Mac drowns his sorrows in apple cider. Spike tries to convince him that he may have have misunderstood Sugar Belle's words, but Big Mac continues to bawl in misery. In an effort to cheer him up, Discord calls for an emergency Guys' Night. Unfortunately, Discord's suggestion of pretending not to care about love falls flat. Back in Ponyville, after they finish decorating the barn, the Cutie Mark Crusaders try and figure out who Sweetie Belle's secret admirer is.

Later, in the world of Ogres & Oubliettes, Discord tries to hook Big Mac up with a cardboard skeleton mare, but Big Mac only talks about how much he misses Sugar Belle and continues to cry. Finally, Spike suggests that Big Mac literally hide from his problems, explaining that if Sugar Belle cannot find him, she cannot break up with him.

As the three hide in the barn, the Crusaders return after they fail to find Sweetie Belle's secret admirer. Despite their failed efforts, the fillies look at the decorations and express how lucky Sugar Belle is to have someone special in her life. While listening in on the Crusaders, Discord plants the idea in Big Mac's head that Sugar Belle does not appreciate him and that she cannot break his heart if he breaks hers first.

We need to talk

At Sugarcube Corner, Sugar Belle shares with Mrs. Cake her excitement to talk with Big Mac, but Mrs. Cake advises her to be careful about how she speaks, or else Big Mac will think she wants to break up with him. As Sugar Belle denies any notion of wanting to break up, Big Mac arrives. Before Sugar Belle can say what she wants to tell him, he breaks up with her and declares their relationship over. Shocked and confused, Sugar Belle tries to ask why, but Big Mac immediately leaves, causing her to break down in tears.

As Big Mac wallows through town and passes by other Hearts and Hooves Day couples, the Crusaders continue to investigate the identity of Sweetie Belle's secret admirer. When Big Mac returns, the Crusaders ask for his help, but he demands to be left alone and accidentally hurts Sweetie Belle's feelings in his frustration. Spike starts to believe Discord was right about love, but Discord gets an idea and disappears. Big Mac apologizes to Sweetie Belle for taking his frustration out on her, and realizing how good it felt to let out his anger, he leaves to talk to Sugar Belle again.

Sugar Belle starts to leave Ponyville, but her wagon breaks down in the mud. Big Mac catches up with her and properly puts his feelings into words. When he says he only broke up with her because she was going to break up with him, Sugar Belle reveals that she wasn't going to. She explains that she is taking a part-time apprenticeship under Mrs. Cake while her cousin looks after her bakery in her village, meaning they'll have more time to spend together.

Big Mac learns a lesson about proper communication as he fixes Sugar Belle's collapsed wagon. When he wonders how confused she was to break up with him after receiving the pie he sent in the mail, Sugar Belle says she never received it or the invitation inside. Therefore, Big Mac happily escorts her to the surprise dinner he planned for them. Meanwhile, Sweetie Belle is disappointed to have not found her secret admirer. When Apple Bloom and Scootaloo share Big Mac's pie with her to cheer her up, they discover the invitation addressed to Sugar Belle inside it and share a laugh over the mix-up.

At the end of the day, Spike tells Discord to admit that, despite the day's mishaps, love was ever present. When Discord still seems dismissive of love, Spike gets upset at his cynicism, but Discord reveals he was the one who broke Sugar Belle's wagon, indicating he does believe in love after all. The two close out the evening with a game of Ogres & Oubliettes.

Spike: Captain Wuzz! Are you prepared to enter the world of Ogres & Oubliettes?
[poof!]
Discord: Huzzah, fellow adventurers! Shall we storm the ramparts of Squizard's castle to reclaim Calico's Ring of Imperceptibility?
[beat]
Discord: You did summon me for a rousing Guys' Night of Ogres & Oubliettes, did you not?
Spike: Uh, sort of. But do you think you could magically hurry up this pie real quick first?
Discord: You seem to be mixing up [poof!] the Lord of Chaos [poof!] with a second-rate clown magician for hire.

Discord: I'm a realist. And love, like all things warm and fuzzy, isn't real.
Spike: Aw, come on. You act tough, but deep down, you're a softie. I mean, you don't have tea with Fluttershy every weekend because you like tea.

Apple Bloom: Mysterious package, smudged address, no idea who it's from... Hm. I know what this is. You've got a secret admirer!

Big McIntosh: She takes pie-baking seriously! Why'd I even try?! I bet she thought I... I was making fun of her!

Apple Bloom: Excuse me! Pipsqueak? Mind answerin' a few questions? No? Late for somethin'? Are you Sweetie Belle's secret admirer?!
Scootaloo: [to Button Mash] Excuse me! I'm doing a research survey about sending pie in the mail anonymously. Would you say you're pro-that or anti-that?
Sweetie Belle: [to Snips and Snails] Happy Hearts and Hooves Day! Did you boys happen to send any packages to me recently? It's okay to say no! I won't be offended! [whispering] Please say no, please say no, please say no.

Big McIntosh: She used to do this thing where her-her nose would wrinkle when she laughed. Right there, in that hole where your nose used to be. I never told her how much I loved wrinkle-nose cutie-face... [wailing] and now I never will!

Big McIntosh: This is why I don't like talkin'! Words can hurt! Words hurt! Goodbye, Sugar Belle!

Big McIntosh: Even though I'm hurtin', I wouldn't trade this feelin' for anythin'. Because it'd mean givin' up the good times we had, too. I only broke up with you because you were gonna break up with me. I respect your decision, and you should know you'll always be in my heart.
Sugar Belle: I didn't want to break up with you.

Sweetie Belle: It's funny. I've been sitting here feeling sorry for myself for not having a special pony on Hearts and Hooves Day. But remembering all the fun we had, I think I have two special ponies – my two best friends.

Spike: Seriously?! Discord, come on! I can't believe you!
Discord: Who do you think broke Sugar Belle's wagon wheel? 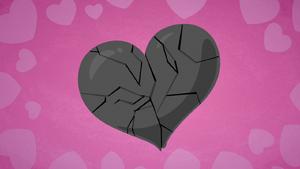 The Break Up Break Down image gallery