The Cart Before the Ponies

The Cart Before the Ponies is the fourteenth episode of season six of My Little Pony Friendship is Magic and the one hundred and thirty-first overall. The title is a reference to the idiom "putting the cart before the horse".

When the Cutie Mark Crusaders enter the annual Applewood Derby, their teammates, Applejack, Rarity, and Rainbow Dash take over the competition.

In production order, this is season six episode fifteen.

At the Ponyville Schoolhouse, Miss Cheerilee announces to her class of foals that she is going to teach them about physics in order to prepare them for the upcoming Applewood Derby, in which the school foals will each build and race their own carts on a racetrack with an older pony assisting and riding with them.

Cheerilee explains that cart racers will be awarded ribbons based on three categories: fastest cart, most traditional cart, and cart with the most creative design.

Later, when school is dismissed, Sweetie Belle researches old Applewood Derbies and wants to win first place for most traditional cart. Apple Bloom says that although the Derby is closely linked to Apple family history and they usually win the most traditional award, she wants to win the fastest cart award. Lastly, Scootaloo states she wants to win the most creative cart award as a change of pace from her high-speed scootering. The three fillies decide to seek help from their older sisters.

At Rainbow Dash's cloudominium, Rainbow agrees to help Scootaloo build her cart, having fond memories of winning her own derby as a filly in Cloudsdale. However, she over-eagerly puts some of her own ideas to work as she goes to search for her own cart's blueprints. Similarly, Applejack favors a traditional cart over Apple Bloom's desire for a modern and fast cart, and Rarity takes charge of making Sweetie Belle's cart to make up for previously losing a first place "Most Creative" ribbon to Derpy.

Very early the next morning, Applejack, Rarity, and Rainbow Dash take their little sisters to Sweet Apple Acres to start building their derby carts. Unfortunately, the older ponies continue to project their own desires onto the Derby and disregard those of the Crusaders.

Though the fillies feel left out, they are certain that their older sisters know best. Their frustration only worsens, however, when Applejack, Rarity, and Rainbow disapprove of and remove the additions they try to make to their respective carts. As the Applewood Derby is about to start, the Crusaders feel even more neglected when Applejack, Rarity, and Rainbow Dash take over as drivers of their carts, despite Derby tradition stating that foals drive the completed carts in the Derby.

The Applewood Derby participants and their older assistants assemble their carts at the starting line. In spite of the Crusaders' continued frustration at being left out of derby activities, they ride in the carts with their older sisters. Cheerilee, dressed in a derby cheerleader outfit, signals the start of the race, and Applejack and Apple Bloom are left far behind due to the outdated design of their traditional cart.

As ponies race down the track, spectators sing a rousing song to cheer the racers on. Though their sisters excitedly sing along, the Crusaders have no fun in their roles as cart passengers. During the race, Rarity's cart blocks the other carts from passing. Near the finish line, Rainbow Dash's cart loses a tire, and the intersecting layout of the racetrack causes all of the carts to crash into each other.

The Crusaders finally vent their frustrations to their older sisters, saying they were supposed to design and drive their own carts in the Derby and that the older ponies ruined things for everyone due to their selfishness. When asked why they did not say anything earlier, the Crusaders say it's hard to speak up to ponies older than them and they figured ponies who participated in the Derby before knew what was best.

Applejack, Rainbow Dash, and Rarity apologize to the Crusaders for getting carried away and ignoring their feelings. They also convince Cheerilee to agree to a second Applewood Derby to make up for the first—with the condition that the older ponies stay on the sidelines.

The three older sisters help the Crusaders build their carts exactly how they were initially envisioned; providing the help that was originally desired. The episode ends as Applejack, Rainbow Dash and Rarity relax on the sidelines of the second race, lamenting their decisions to partake in the race in the first place.

The Applewood Derby is a soapbox derby featured in the episode. In the event, colts and fillies build racing carts out of Sweet Apple Acres' applewood with the assistance of an older pony and race said carts on a town-wide racetrack with their cart-building assistants as their passengers. Winners of the Derby are awarded based on three categories:

Snails: Oh, phew! For a second, I thought we were gonna have to, you know, learn stuff.

Snips: Aww... I knew there was gonna be a catch!

Scootaloo: How awesome is this? With Dash on my team, how could anything go wrong?

Rarity: Soon the prize for most creative will finally be in my hooves!
Sweetie Belle: You mean my hooves.
Rarity: Yes, that's what I said – my hooves.

Sweetie Belle: Doesn't look like any of us ended up with what we wanted.
Apple Bloom: But... I'm sure our older sisters know what they're doin'. Right?
Scootaloo: Right...
Sweetie Belle: Right.

Rarity: Oh! My beautiful swan cart is an ugly duckling!
Applejack: And my old-time cart is a rootin' tootin' wreck!
Rainbow Dash: [straining] It still counts as a win if I push my cart across, right?

Rainbow Dash: Why didn't you say anything?
Scootaloo: You've all done the race before. I just figured you knew best!
Sweetie Belle: Plus it's hard to speak up to older ponies.
Rarity: Oh, I certainly understand that. But you mustn't think older ponies automatically know best.
Rainbow Dash: And we probably could have done a better job of listening to you.

Rarity: Honestly, I'm not sure why we wanted to race those carts in the first place. 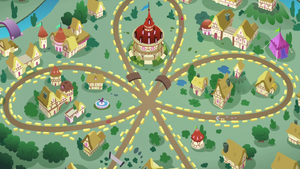 The Cart Before the Ponies image gallery