Considerable paperwork is just one of Celestia's administrative duties.

Did you hear that?

"...you must come to Canterlot at once."
Add a photo to this gallery

Preparing for the test

Should I be worried?

Spike being squashed by a book.

Such a big heavy book for a baby dragon.

Well, that was a fast find.

I want you to quiz me!

Spike must be really aggravated.

"That isn't going to be enough cards."

Or perhaps you're right.

Full rage indeed.
Add a photo to this gallery

A depiction of Shining Armor and Princess Cadance's victory over the Changelings.

Hey, Shining Armor and Cadance got their own window!

"The empire's magic is powerful. It cannot fall again, my sister."

"She will succeed at her task. And when she does, we'll know that she is that much closer to being ready."

I've got everything I need.

Go on, my sister.

Hmm,Twilight, it isn't this kind of test.

"This is a different kind of test."

"The Crystal Empire has returned."

You're not supposed to be looking for information...

...because not many people know of it.

Let me show you something.

Ooh, a crystal. What does this do?

Twilight looking at the Crystal Empire.

A vision of a once happy crystal pony family.

A flashback to his Era of tyranny.

The dark reign of Sombra

Dramatic back lit shot of Celestia and Luna

Turned to shadow and sealed away.

King Sombra screaming as he gets sealed away.

The Crystal Empire, going back to the way it was.

And when the world needs it most, it vanished!

"...those things are reflected across all of Equestria."

Hey! Who turned out the lights?!

It's a (demonstration) trap!

Twilight scared of the dark crystals.

Princess Celestia must be so proud after doing this...

"Which is why I need your help finding a way to protect it."

"You want me to protect an entire empire?"

"This is a different kind of test."

"By joining Princess Cadance and Shining Armor in the Crystal Empire."

I hear you, Princess.

Another motherly moment by Princess Celestia.

"It must be you and you alone who ultimately assists Princess Cadance and Shining Armor in doing what needs to be done to protect the empire."

…Oh dear.
Add a photo to this gallery

"Oh, Twilight. That was fast."

How did it go?

Oh no, is she going to break into a song?

Spike whispering to Twilight, asking if she failed.

Is everything alright Twilight?

"I was prepared to do my best, thought I could handle any test..."

Song time! My kind of time!

"For I can do so many tricks, but I wasn't prepared for this

Who are you, invading my music video?

What is this, a Shoeshine x fancy stallion moment?

"Levitation would have been a breeze..."

"...facts and figures I recite with ease."

"I could ace a test on friendship's bliss..."

Did Spike get dropped?

"But I wasn't prepared for this."

The wind is flowing through her mane.

Twilight is about to teleport.

Twilight and Spike, are the best Equestrian dancers!

But no I wasn't

Oh no she wasn't

Oh no I wasn't

Oh no she wasn't

"...for THIIIIIIIIIIIS!"
Add a photo to this gallery

Twilight is walking in a depressed way while Spike walks gleefully.

"Uh, prepared for what exactly?"

She wasn't kidding when she said she'll never leave home with her party cannon!

"We're going to the Crystal Empire."

Rarity was the only one prepared and she's happy about it.

How about sharing some of your scarves, Miss Generosity?

Aww, siblings love at its finest! ^_^

There are things out there we really don't want to run into after dark.

W-what does he mean by that?

What kind of things?

Spike and the others

Walking in the storm

Come on girls, we better get to the Crystal Empire.

But Princess Celestia said I was being sent here to find a way to protect the empire!

If King Sombra can't get in, then it must already be protected.

Ooh noo, this can't be good.

That's one of the things, isn't it?

We have to get to the Crystal Empire.

A shadow of a new villain behind the ponies

Main Six run to the safety of the Crystal Empire.
Add a photo to this gallery

Shining escapes but is in worse condition than before.

The castle of the crystal empire

Gotta do what now?

Well, I know that!

Why can't you enjoy the scenery too!

You can't be serious Rainbow!

Rainbow's words are sinking in.

Rarity, nose to nose with a concealed emotion Rainbow Dash.

Rainbow's got you, Rarity.

How wary she looks.

and do a little shack

"Her magic will not last forever"...

Who said what now?

"There are CRYSTAL PONIES???"

Rarity, what's the matter with you?

I hope they don't remember this.

All right, Twilight is looking at us.

Some weird stuff is going on.

"This is going to be great!"

She's your sister so tell me what she means by this research paper.

Is it just me or does Spike look smaller? Anyway he does look cute in this shot.

Gotta trust that wink of confidence.

Twilight and Spike at the doorstep of a crystal pony.

A Crystal Pony speaking to Twilight.

A vision of King Sombra.

A shocking occurrence - terrified of the memory of being ruled under Sombra.

Spike, upset about not getting any information.

Twilight and Spike, as they leave the crystal pony's house.

Come on, I know you got something!

Rainbow Dash is determined to get answers!

I wish I could help you. Really.

Rainbow dashing after a crystal pony.

"You gotta know something!"

Fluttershy seems unsure of which pony to ask.

Hey wait! I wanna ask you something.

These Crystal Ponies are seriously emo...

Fluttershy remembering her assertive training from a while back.

Come on, these ponies must be awoken pronto.

Ooh sorry, didn't know you were just hanging out.

We have a spy lurking among us.

"Time to gather some intel."

"It looks the same, but it doesn't feel the same."

How did they know?

Must have noticed my night vision goggles

A smile is hidden on Pinkie Pie's face.

Rarity is a Crystal Pony.

And when you flip your mane, it simply must create a rainbow of color.

Back away from the crazy pony.

How proud Rarity looks.
Add a photo to this gallery

Rarity & Rainbow Dash arrive to give their progress reports.

The Thing is in Equestria now

The most disturbing thing yet?!

"My cover has been blown"

What am I standing in?

The main 6 and Spike approaching the library

Searching for the book.

Dashing through book after book.

Pinkie Pie defying the laws of physics to find a book

Poor Spike, having to carry that heavy book all by himself.
Add a photo to this gallery

The Ballad of the Crystal Empire

Twilight telling her friends that Princess Cadance needs their help.

Fluttershy, how did your wings get all the way back there?

The book before Rarity.

A picture of two ponies jousting.

Putting on the jousting armor.

Hope that cloth is fine silk.

Rarity helps out, during the song.

A picture of a baby sheep.

The admission for the petting zoo was downright sheep.

Fluttershy and Applejack singing along.

Picture of a crystal pony blowing a flugel horn.

And the Crystal Kingdom anthem

Doing everything according to the book.

They sure love to sing.

It looks amazing!
Add a photo to this gallery

What is this thing?

Twilight explaining the importance of the crystal heart to Applejack

So, I cut one out of a crystal block.

Looks like it's time to get this festival rolling.

The ponies, at the opening of the Crystal Faire.

The crystal ponies regaining their memories and shiny bodies

Ponies are always adorable no matter how they feel.

While the two mares chat about something important that is not presented yet thanks to the writer, Rainbow Dash is busy eating some corn.

"Do you think they really have it?"

"Can't have a Crystal Faire without the crystal heart, right?"

She regains her memory about the crystal heart.

Rainbow Dash, in a rainbow blur.

We may have a problem...
Add a photo to this gallery

"This book said nothing about the crystal ponies powering the heart."

A page missing from the book.

Oh no, she doesn't look so good.

There there dear, I got you.

I'll find the crystal heart, that thing is moving in quickly.

The black smoke, is coming closer to the empire.

Lord of the Rings meets MLP?

King Sombra, has returned.
Add a photo to this gallery

A shot of the Crystal Empire,released by Entertainment Weekly. 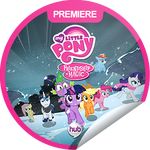 GetGlue sticker
Add a photo to this gallery
Retrieved from "https://mlp.fandom.com/wiki/The_Crystal_Empire_-_Part_1/Gallery?oldid=2189576"
Community content is available under CC-BY-SA unless otherwise noted.