My Little Pony Friendship is Magic Wiki
Register
Don't have an account?
Sign In
Advertisement
in: Season 3 episodes
English

The episode starts with a short recap of Part 1 and continues after Princess Cadance faints, causing the magical shield to vanish. King Sombra prepares to charge into the city, but Shining Armor helps Cadance recover in time to restore the shield. The shield slices off a small piece of his horn, which falls to the ground as a dark crystal. Twilight Sparkle instructs her friends to entertain the Crystal Ponies at the Faire while she searches for the real Crystal Heart. At first, she doesn’t want Spike to come along on this dangerous mission, but she relents when he promises not to lift a single claw to help her. Meanwhile, the friends come up with ways to distract the Crystal Ponies. Rainbow Dash addresses Fluttershy as "Knight Fluttershy", announcing that it's showtime. Applejack prevents the carnival-goers from unveiling the fake Crystal Heart.

Twilight deduces that King Sombra hid the Crystal Heart in the castle, since nopony would be brave enough to set foot in there during his rule. In the throne room, she finds a large crystal at the crest of the throne's backrest. Remembering how Princess Celestia replicated King Sombra's magic in the previous episode, Twilight does the same and the crystal's black light reveals a spiral staircase in the center of the room. Twilight begins her descent down the long, dark staircase, telling Spike to keep an eye on the situation outside. When Spike warns her that Cadance's magic is fading faster than ever, Twilight trips and tumbles down the staircase.

At the bottom of the stairwell, Twilight replicates King Sombra's magic again to open a door. When Twilight crosses the threshold, she sees Princess Celestia in the Canterlot throne room. Celestia sternly tells Twilight that she has failed her test and is no longer her student. Twilight begins to cry as Sombra laughs. The camera zooms out to show Twilight sitting in front of a wall. Spike catches up with her and asks her if she is all right. The whites of Twilight's eyes, which have turned green, become normal as she snaps out of her vision. She steps out of the way and lets Spike approach the door. His eyes turn green and he cries, "Please, Twilight, don't leave me!" Twilight slams the door shut, telling him that King Sombra has bewitched the door to make it show their worst fears. She reassures Spike that she will never send him away and uses her magic to open the real door. They see a light blue staircase snaking up the exterior of a tower. Like the dark staircase, this one seems to have no end.

The scene changes to show Princess Cadance, whose magic is faltering as she struggles to keep it going. King Sombra’s magic rapidly penetrates the kingdom, leaving two black trails. At the Faire, Crystal Ponies cheer as Rainbow Dash and Fluttershy, dressed in armor, prepare to joust with blunted lances attached to their chests. Pinkie Pie, seeing an ominous thunderclap, blows on her flugelhorn, signaling the two ponies to charge. Fluttershy panics when they collide and is launched in the air. Dash exhorts her to continue, saying that the fate of an empire rests on showing the Crystal Ponies a good time. Neither of them notice several buildings become tainted with Sombra's magic.

The camera cuts to Twilight and Spike wearily trekking up the staircase. Twilight looks up and is inspired to perform an anti-gravity spell, allowing her and Spike to slide "down" (up) the underside of the staircase. Whooping with glee, Twilight explains that she had studied gravity spells for her test.

The camera cuts back to the Faire. As the sky darkens, Rarity frantically crafts traditional baskets and hands them to the Crystal Ponies, but runs out of materials. The ponies become aware that King Sombra has returned, and anxiously surround what they think is the Crystal Heart. Rarity and Applejack look up at the castle balcony, where Princess Cadance has collapsed in Shining Armor's forelegs. Pinkie Pie is juggling flugelhorns on a bouncy ball but slips. The ball knocks over the flag covering the fake Crystal Heart, which clatters to the ground before the shocked ponies. Rarity is about to say something, but is interrupted by Applejack, stating that the real Crystal Heart is on its way. Rarity whispers to Applejack that she was going to say that the Crystal Heart was being polished to buy time. As Applejack sheepishly realizes her mistake, Sombra's laughter echoes overhead. The citizens scatter, crying, "It's him!"

Twilight and Spike reach the top of the tower to see the resplendent, light blue Crystal Heart suspended above a wide circular disc. When Twilight steps onto the disc, it begins flashing like an alarm and alerts King Sombra. He throws up a wall of black crystals around the perimeter of the disc, trapping Twilight. She knocks the Heart out of the prison just in time and it lands a short distance from Spike.

Spike to the rescue!

An outside shot of the tower reveals it to be the center tower of the castle, the highest point of the building. Twilight tries to escape from the trap, but it teleports her back in. Realizing she cannot deliver the Heart herself, she tells Spike that he must do it. Spike grabs it and jumps off the tower just as black crystals pierce the floor. The camera pans to Applejack and Rarity nervously reassuring the Crystal Ponies from the castle balcony. The last few wisps of magic vanish from Cadance's horn and the barrier disintegrates. A Crystal Pony tries to make a run for it, but she bumps into a towering crystal, where King Sombra appears and says, "My crystal slaves..."

Spike dodges the black crystals while making his way down the exterior of the tower. He calls down to the others that he has the Crystal Heart, and King Sombra growls, "That is mine!" He charges towards Spike as he runs down the spiral.

Spike trips and the Crystal Heart falls out of his grasp. Shining Armor picks up the dazed Cadance on his back. She sees Spike and the Heart falling from the tower and spreads her wings. Shining Armor launches his wife into the air like a glider with all his strength, and she catches the Heart and Spike, just in time. As she flies back down to the ground, a Crystal Pony cries, "Behold! The Crystal Princess!" She lands among them, smashing the fake heart under her hooves. She firmly says:

"The Crystal Heart has returned. Use the light and love within you to ensure that King Sombra does not."
— Princess Cadance

She tosses the Heart under the castle, and the snowflake pattern in the center glows bright blue. Two vertical crystal spires come together to keep the Heart in place. The Crystal Ponies regain their crystalline colors and bow to Cadance. Blue light spreads through the streets of the empire. The light suddenly retracts and concentrates inside the Crystal Heart, causing the heart to spin rapidly, generating a sphere of light that explodes and engulfs the empire. Cadance, Shining Armor, the Mane Six, and Spike become colored like the Crystal Ponies.

Another, more prolonged, concentrated blast from the Crystal Heart destroys Sombra's physical form and his black crystals, drives back his black clouds, and returns the castle and the Empire to its beautiful appearance. The crystal on top of the castle begins to shine. White light shoots up from the castle's base to the top crystal, and it fires a ribbon of energy into the sky which results in one final, ground-shaking blast of blue light above the empire that disperses the black clouds and dark skies forever. The ribbon radiates into many pink, blue, and yellow ribbons that look similar to the Northern Lights. The ribbons of light are visible from Ponyville and Canterlot. In Canterlot Castle, Princess Celestia and Princess Luna see the ribbons of light and cross their horns with a smile.

The Crystal Ponies resume their normal activities. As the royal couple accompany the friends to the train station, Shining Armor jokingly tells Twilight that she has to stop "saving his rump like this," but she reminds him that Spike was the one who did it in the end. Shining tells her that it was just a test and maybe Celestia will just let her retake it, but Cadance touches him with her wing in a 'don't say that!' manner. Twilight remains pessimistic about her meeting with Celestia, leaving her brother and sister-in-law to watch after her with worry.

In the Canterlot castle, Twilight admits to Celestia that she alone wasn't the one who saved the day in the end. Celestia tells her that by choosing to stay in the prison to save time, she put the safety of the Crystal Ponies before her own future. Celestia explains that she would rather have a student who understands self-sacrifice than one who puts her self interests first.

Twilight happily announces to her friends that she passed the test, and they all celebrate by singing The Success Song. The friends triumphantly leave Canterlot on the Friendship Express. The camera zooms out and settles to show one of the palace balconies.

As Celestia and Luna watch the train depart, Luna magically materializes a spiral-bound book. The princesses look at it, and nod at each other. The book has a dark cover which shows two stars and a swirly pattern. On the train, Spike says that he knew everything was going to be okay and dozes off.

Rarity: [gasps loudly] [pause] I... just found out they're offering face painting for the little ones. [laughs nervously] [whispers]
Spike: [under his breath] Uh-huh. We can do that. Twilight's doing what?! [sound of a car driving off at speed]
Rarity: He... really... loves getting his face painted. Haha.

Fluttershy: [nervous exhale] [catching breath] Isn't there... somepony else who could... take over the jousting demonstration with you?
Rainbow Dash: Tchah! The fate of an entire empire rests on us showing these ponies a good time. But, y'know, if that isn't important to you...
Fluttershy: [cries]
Rainbow Dash: Okay, okay, I'll take it easy on you next time. But not too easy. I've got a reputation to maintain!

Rarity: Hehe, excuse me- pardon me! (whispers) I am running out of weaving materials for the traditional crafts booth! I just made a hat out of three pieces of hay and a drinking straw! I made it work, though, but still!

Rarity: I do so wish it was permanent. Did you see how my mane just absolutely sparkled?
Applejack: But... good things are better when they're a rarity.
Rarity: Aww. [laughs] 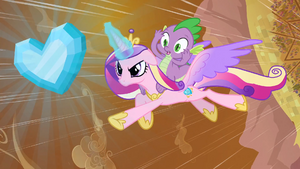