One of the first drafts of this episode's script was submitted to DHX in November 2014.[1]

The scene of Shining Armor at the train station was storyboarded by Thalia Tomlinson.[2]

Starlight Glimmer, newly accepted student to Princess Twilight Sparkle, tries finding her way around the large Castle of Friendship. Upon finding Twilight in the castle library, Starlight thanks Twilight for letting her stay at the castle after everything she's done in the past. Twilight tries to help Starlight feel welcome, and as Starlight's teacher, she tries to figure out what her first friendship lesson should be, having made extensive lists of possibilities.

As Twilight sorts through her lists, Starlight joins her friends in the castle throne room, where they plan their upcoming trip to the Crystal Empire. With Princess Cadance and Shining Armor having their baby soon, the Mane Six look forward to the baby's "Crystalling". Spike explains that the Crystalling is a special ceremony for Crystal Empire newborns that culminates in making the Crystal Heart stronger than before.

Starlight returns to the library to ask Twilight for more details about the Crystal Empire, and Twilight says she has decided upon Starlight's first friendship lesson: reuniting with her old friend Sunburst, who currently lives in the Empire. However, Starlight is extremely worried about doing so.

A short while later, Starlight confides in Spike that she is nervous about reuniting with Sunburst. She explains that, when they were little, Sunburst was always more talented and knowledgeable about magic than she was. She worries how Sunburst, probably an esteemed wizard now, might react to learning about her past crimes and mistakes.

As Spike encourages Starlight to talk to Twilight about her troubles, Twilight excitedly summons them to the castle balcony. A snowflake-shaped invitation to the Crystalling arrives, indicating that Cadance and Shining Armor's baby has now been born. Twilight prepares to travel to the Empire while Starlight is more worried than ever about her upcoming reunion with Sunburst.

Trip to the Empire

During the Friendship Express train ride to the Crystal Empire, Twilight's friends each share their gifts for the baby, including a cradle from Applejack and a mobile from Rainbow Dash. As Pinkie Pie expresses excitement about seeing the brilliance of the Crystal Heart, Twilight explains that the Heart serves a second purpose in protecting the Empire from the frigid cold of the Arctic North.

With Spike's encouragement, Starlight tries talking to Twilight about her worries regarding Sunburst, but Twilight is so engrossed in her duties as a teacher that Starlight's worries barely register.

At the Empire train station, Twilight and her friends meet with Shining Armor, who suffers from lack of sleep due to the baby's birth. Realizing that her brother and sister-in-law need a lot of help, Twilight considers postponing Starlight's friendship lesson, much to Starlight's relief. However, since Twilight made an extensive checklist for Starlight's lesson, Spike steps in to take over.

On their way to Sunburst's house, Starlight tries stalling Spike any way she can. When they pass by a crystal statue of Spike, Starlight distracts him by asking how he saved the Empire from King Sombra and during the Equestria Games, which attracts a crowd.

Meanwhile, at the palace, the Mane Six meet Shining Armor and Cadance's newborn foal who, much to their shock, turns out to be an Alicorn. Princess Celestia and Princess Luna, also in attendance of the baby's Crystalling, explain that this is the first natural Alicorn birth in Equestria. Due to the unpredictability of the baby's magic, demonstrated when she blasts a hole in the ceiling with her sneeze, Cadance considers cancelling the Crystalling. But Celestia says the Crystalling is more important now than ever, and she advises that Cadance inform her subjects of the situation.

While Twilight and Pinkie Pie look after the baby, the rest of the Mane Six help Shining Armor with the Crystalling preparations.

Back in the statue plaza, Spike regales a crowd of Crystal Ponies with the story of how he saved the Empire from Sombra before returning to overseeing Starlight's friendship lesson. The two go to Sunburst's house, and a scraggly-looking Sunburst answers the door. He and Starlight act very awkward around one another before Sunburst eventually closes the door. Starlight is eager to leave, but Spike pressures to give it another shot.

Back at the palace, Princess Cadance addresses the Crystal Ponies while Shining Armor sees to the Crystalling preparations behind a curtain. However, due to his lack of sleep and the stress that comes with being a father, he quickly suffers a nervous breakdown. Meanwhile, Twilight and Pinkie Pie struggle with keeping the baby and its magic under control.

Inside Sunburst's house, Starlight and Sunburst continue acting awkward around each other, being intentionally vague and exaggerating about what they've been doing since parting ways. Spike looks through Twilight's list in search of a solution.

After Shining Armor finishes the Crystalling preparations and Cadance finishes addressing the public, Twilight and Pinkie Pie arrive with the baby to begin the ceremony. However, once the baby is separated from Pinkie, she starts to cry. Her booming wail causes the Crystal Heart to shatter into pieces.

As a result of the Heart's destruction, menacing snow clouds start to descend upon the Empire.

Starlight Glimmer: [sighs] This castle looked a lot smaller from the outside.

Twilight Sparkle: The castle is your home now, and as far as being my pupil goes, I was just trying to figure out what your first friendship lesson should be!
Starlight Glimmer: Oh, well, it looks like you're really narrowing it down!
Twilight Sparkle: Oh, these are just the A's. After this, I move on to the B's!

Starlight Glimmer: I guess it's not surprising that Sunburst got his cutie mark in magic and... went off to Princess Celestia's school. But when he left...
Spike: You blamed cutie marks and stripped a whole village of theirs, and when Twilight and the others stopped you, you went back in time and almost destroyed Equestria.

Twilight Sparkle: I didn't know you were meeting us!
Shining Armor: [tired] Of course I am! It's me, right here. Here I am. Why wouldn't I come meet my sister? Though we have met before, heh-heh...
Twilight Sparkle: Are you all right?
Shining Armor: [tired] Never better! Being a father is amazing! And wonderful, and amazing, and confusing, and amazing, but surprising too, you know? I mean, not that you'd know. You wouldn't know, I know... You know?

Shining Armor: Before we go in, I should probably tell you. Seeing the baby might be a bit of a shock.
Twilight Sparkle: Come on, big brother. I met babies before. I expect meeting this one won't be any different. [gasps]
Flurry Heart: [coos]
Twilight Sparkle: Of course, I could be wrong.

Princess Celestia: The birth of an Alicorn is something Equestria has never seen!
Princess Luna: It is beyond even our understanding.
Fluttershy: [hushed] That's not very reassuring.

Shining Armor: I still have to interview the honor guards, choose the purity crystal, and pick a crystaller!

Spike: If we skip it, the whole lesson could go south! And then you might end up taking a giant step backwards instead of forwards! Maybe you'll never be able to learn anything about friendship at all! It's almost like your whole future depends on this moment.

Shining Armor: Okay. I chose the honor guard, picked the purity crystal, and I know exactly who I want to be our crystaller. So, all we need is...
Princess Cadance: The baby?

Applejack: I'm guessin' that's gonna make it harder to do the Crystalling.
Twilight Sparkle: It's worse than that. Without the Heart, the Crystal Empire's about to be buried under a mountain of ice and snow! 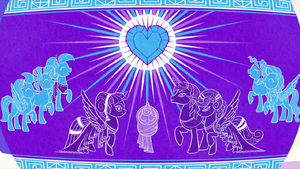