The Crystalling - Part 2 is the second episode of season six of My Little Pony Friendship is Magic and the one hundred and nineteenth overall. It is the second part of a two-part season premiere.

Eternal winter makes its way to the Crystal Empire while Starlight Glimmer struggles to reunite with her childhood friend.

Subsequent to the episode's premiere, a season six promotional image featuring Twilight Sparkle as a Crystal Alicorn and Spike wrapped in paper was posted on the My Little Pony Facebook page on April 2, 2016.[1]

With the Crystal Heart in pieces, the Crystal Empire is left unprotected from the Arctic North's wintry fury. As thick snow clouds move in, Rainbow Dash says she can clear them away, but Princess Celestia and Princess Luna tell her this storm is too powerful for her to handle.

Back at Sunburst's house, Starlight Glimmer and Sunburst's efforts to rekindle their friendship have unsatisfactory results. Using Twilight Sparkle's checklist as a guide, Spike suggests that they each share an embarrassing story from their past. Both Starlight and Sunburst are nervous about this idea, and Starlight decides to leave Sunburst to his important work, dragging Spike along with her.

As Celestia and Luna use their magic to keep the storm clouds at bay, Applejack, Fluttershy, and Rainbow Dash go to convince the Crystal Ponies to take shelter from the storm. Twilight and the rest of her friends race to the Empire library to find a spell to restore the Crystal Heart, hindered by the Alicorn baby's still uncontrollable magic.

Starlight laments her failure to complete Twilight's friendship lesson, convinced that Sunburst doesn't want to be her friend. Spike assures her that Twilight wants to be her friend, and he does as well. Finally noticing the Empire's strange weather, Starlight and Spike believe something has happened to the Crystal Heart, and they race to the palace.

In front of the palace, Applejack, Fluttershy, and Rainbow Dash try to convince the Crystal Ponies to go indoors, but the crowd refuses to budge, especially when they learn that the royal baby is an Alicorn. In the library, Twilight and Princess Cadance look for a spell to fix the Crystal Heart while Pinkie Pie, Rarity, and Shining Armor try to rein in the hyperactive baby.

Starlight and Spike arrive to witness the chaos, and Pinkie Pie brings them up to speed on the situation. Twilight and Cadance finally find a "relic reconstitution" spell to restore the Crystal Heart, but the baby accidentally blasts a hole through the spell book.

As the storm outside worsens, Twilight tries to rewrite the relic reconstitution spell from memory while Shining Armor organizes an evacuation of the Empire. When Starlight mentions Sunburst and claims he's a "big, important wizard", Cadance suggests bringing him to the castle for his magic expertise.

Starlight and Spike return to Sunburst's house, and Starlight informs him of the situation. With everyone trying to restore the Crystal Heart, Starlight asks Sunburst for his help. Sunburst nervously declines, saying he has too much "important wizard work" to do.

After enough of Starlight's prodding, Sunburst eventually admits that he isn't an important wizard or talented at magic like Starlight believed. As he goes on to admit that he was a failing student at Celestia's School for Gifted Unicorns, Starlight tearfully admits to her own past shortcomings. Sunburst apologizes for losing touch with Starlight and not telling her the truth. Starlight forgives him and reminds him that the Empire is being evacuated.

"Unless you've got a spell here that will drive back the Frozen North and fix the Crystal Heart so the baby can have her Crystalling?"
— Starlight Glimmer

Looking through his vast collection of books, Sunburst believes he has a solution.

As Celestia and Luna are overwhelmed by the building storm clouds, the ponies race to the train station. Along the way, they run into Starlight and Sunburst, who claim to know how to stop this.

In front of the palace, Twilight and Cadance use the rewritten relic reconstitution spell to try and restore the Crystal Heart, but it unfortunately fails. Just then, Sunburst arrives to lend a hand. He proposes carrying out the Alicorn baby's Crystalling and combining it with spells from Starlight, Shining Armor, and the princesses. With Twilight busy casting her magic on the Crystal Heart, Shining Armor and Cadance appoint Sunburst as the ceremony's Crystaller.

As Twilight, Starlight, Celestia, and Luna cast their magic on the Crystal Heart, Sunburst, Cadance, and Shining Armor carry out the baby's Crystalling. The light and love within the witnessing Crystal Ponies is channeled into a single crystal, which Sunburst then merges with the Crystal Heart. The resulting magical burst restores the Heart, gives everyone in the Empire crystalline coats, and dispels the storm.

Starlight commends Sunburst for coming up with the solution to the Empire's crisis, and Princess Celestia expresses her delight that he was finally able to put his unique gifts to use.

Some time later, Twilight and Shining Armor's parents Twilight Velvet and Night Light arrive at the Empire, their train having been delayed by the winter storm. When Twilight Velvet asks what the baby's name is, Cadance and Shining Armor give her the name Flurry Heart as a reminder of this memorable occasion. Meanwhile, Starlight Glimmer and Sunburst finally rekindle their friendship and agree to stay in touch.

On the train back to Ponyville, Twilight laments failing to give her first student a proper friendship lesson, but Spike assures her that everything worked out in the end because Twilight gave Starlight space to make her own decisions—just like how Celestia previously taught her. The episode ends with Starlight waving goodbye to Sunburst as the Friendship Express heads toward Ponyville, while a single changeling is seen flying in the direction of the Empire.

Sunburst: I know Princess Twilight is keen on the two of us rekindling our friendship, but... it's been so long. I don't see how anything on that list is going to help.
Starlight Glimmer: I know, right? It's not like there's some spell that would magically compel us to pick up where we left off.
Sunburst: Well, actually, there's several. Mistmane's Material Amity, Rockhoof's Rapport, Flash Prance's Fellow... ship... [ahem] But I-I get the feeling the princess isn't looking for a spell.

Starlight Glimmer: Uh, yeah! We should just get out of your mane. It's pretty obvious this isn't going how Twilight hoped, and I'm sure you have plenty of important work to do...
Sunburst: What? Oh! Right, yes, heh-heh! Uh, no rest for the wizardly.

Rainbow Dash: Look, I am a hundred percent sure the Crystalling isn't happening.
[magic zaps]
"Mustafa Combe": No Crystalling, huh? Then why are they starting the fireworks show?

Princess Cadance: Do you think you can remember the spell?
Twilight Sparkle: I only read it through once!
Rarity: Well, if anypony can exactly remember something she read for the first time two minutes ago, it's you, Twilight.
Twilight Sparkle: I'll try. But I'm not sure how long it'll take.
[wind blowing]
Pinkie Pie: Is quickly an option?

Rainbow Dash: Come on, it's freezing out here!
"Tough Nut": Uh, this is the Crystal Empire. We've seen snow before.

"Tough Nut": It's not safe here!
Applejack: [groan] That's what we've been tryin' to tell you!

Starlight Glimmer: Sunburst, I don't care if you're a wizard or not. I'm just surprised. You always knew so much about magic. I mean, look at all these books!
Sunburst: Yeah, well, reading about magic is one thing, but you don't know what it was like at magic school! To know so much and not be able to do any of it!
Starlight Glimmer: Well, you don't know what it was like to be left behind! And then getting so bitter that you steal the cutie marks from an entire village and then get defeated by Twilight and her friends, so you travel through time to get back at them, but they beat you again and teach you about friendship, but you're so terrified ponies will find out what you did that you can't make any friends!
[long beat]
Sunburst: Did you really travel through time?

Night Light: You would not believe the crazy weather that delayed our train. Came out of nowhere.
Twilight Velvet: But it was all worth it to see this peaceful little angel! Awww, so sweet! Come to your grandmare!

Twilight Velvet: Cadance, darling, aren't we gonna name the poor little dear, or are we gonna spend our entire visit just calling her "the baby"?
Princess Cadance: We were thinking... "Flurry Heart".
Shining Armor: You know, to remember the occasion.
Rarity: Oh, goodness, how could anypony forget?

Starlight Glimmer: Well, I think you're the Crystal Empire's big important wizard, whether you like it or not.
Sunburst: I don't know if I'll have time for any wizarding. I'm a crystaller now. That's a big responsibility.
Starlight Glimmer: I can't think of anypony more qualified. Just... promise you'll stay in touch?
Sunburst: Hm, like I'd ever lose touch with my oldest friend. 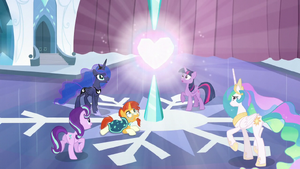