The Cutie Map - Part 2, also formatted The Cutie Map, Part 2[1] and also called Cutie Markless[2][3] Pt 2,[4] is the second episode of the fifth season of My Little Pony Friendship is Magic and the ninety-third episode overall. It is the second part of a two-part season premiere. Along with Part 1 of the premiere, these two are the first episodes to premiere on the Discovery Family Channel.

In this episode, the Mane Six attempt to retrieve everyone's cutie marks as well as their own. In the process, they discover a startling secret about the pony who took them away.

The mountain area was previewed in one of the animation images shown at Ponycon NYC on February 16, 2015.[5]

The title "Cutie Markless, Part 2" was formerly listed in a pre-order listing for Shout! Factory's Cutie Mark Quests DVD including this episode.[1] Said listing and March 3–5, 2015 Twitter replies by Jim Miller have together indicated "Cutie Markless: Part 2" and "Cutie Markless (2)" as wrong.[6][7][8][9] "Cutie Markless Pt. 2" is listed on the disc art of a Discovery Family press promo DVD for season premiere screening.[10]

Directors Jayson Thiessen and Jim Miller along with art director Rebecca Dart and prop designer Charmaine Verhagen came up with the design for the "Staff of Sameness".[11]

During Treehouse TV's airings of this episode, Starlight Glimmer saying the word "fools" was muted out.

Both this episode and its first part were nominated for a 2016 Hugo Award for Best Dramatic Presentation (Short Form).[12]

The scene when when Starlight gets defeated reappears in Memories and More.

"Free yourself from your cutie mark. Choose equality as your special talent."
— Starlight Glimmer's village broadcast

Following the loss of their cutie marks, the Mane Six are locked inside one of the village houses as unwilling permanent residents. As a result of their talents being taken away, Rarity has lost her sense of fashion, Fluttershy is unable to communicate with animals, Applejack has lost her country-style mannerisms, and Pinkie Pie is less cheerful.

Twilight Sparkle, curious about Starlight Glimmer's Staff of Sameness, tries to think of a way to escape and eventually suggests pretending to accept the villagers' way of life. Because Fluttershy has been the most optimistic about the village since their arrival, her friends decide she is the only one whose pretending will be believed.

Starlight Glimmer lets the friends out of the house and asks if they are ready to join her society. The Mane Six once again refuse, saying that friendship between ponies cannot be forced. Starlight prepares to lock them up again, but Fluttershy speaks out, wanting to join her. Twilight and the others are locked inside the house, and Starlight welcomes Fluttershy—on one condition: give up the names of the ponies who spoke with her in secret and told her about the cutie mark vault.

Before Fluttershy is pressured into outing her new friends, Party Favor speaks up, taking all of the blame and insisting he was acting alone. Starlight Glimmer locks him up with Fluttershy's friends as punishment. Party Favor despairs that it's only a matter of time before Twilight and her friends have all accepted Starlight's way, but they are certain that Fluttershy will come through.

The next morning, Starlight asks Twilight and the others once again if they're ready to join. They say nothing, and Starlight prepares to lock them up again. Party Favor is released when he shows remorse for his actions. When Twilight shows interest in joining Starlight's society, Starlight reasserts that happiness can only be found in equality.

With this, Fluttershy attempts to expose Starlight's secret by dousing her in water. Starlight avoids getting completely wet, but some of the water splashes on her and causes her makeup to run. Party Favor notices this and uses a rag to reveal Starlight's real cutie mark underneath her fake one, much to the shock of her followers. Despite Starlight's efforts to save face, the villagers are upset that she lied to them. With her perfect society and plans now ruined, Starlight runs to lock herself inside her house. As the villagers go to retrieve their cutie marks from the vault, the Mane Six approach Starlight's house to retrieve theirs.

Using the Staff of Sameness (revealed to be nothing but a hunk of wood), Double Diamond shatters the vault's glass covering, and the cutie marks fly back to their respective owners. Meanwhile, Starlight takes the Mane Six's cutie marks and escapes through a secret passage under her bed.

With the villagers' help, the Mane Six break into Starlight's house and follow her through the secret passage. They see Starlight fleeing toward the mountains, through which a network of caves would guarantee her escape and the loss of the Mane Six's cutie marks for good. Using their rediscovered special talents, Party Favor, Sugar Belle, Double Diamond, and Night Glider pursue Starlight Glimmer through the mountains, eventually cornering her just outside the caves and burying her in snow. The jars containing the Mane Six's cutie marks shatter, and their cutie marks are finally restored.

Twilight and her friends catch up to confront Starlight Glimmer one last time, with Twilight protecting Party Favor and the others from a retaliatory attack from a furious Starlight. Despite Starlight's assertions that she gave the villagers "real friendship," Twilight speaks of the friendship she shares with her friends and how more genuine it is than Starlight's. In her desperation and fury, Starlight blinds everyone with a spell while she escapes into the caves. Party Favor and the others thank Twilight and her friends for helping them rediscover their true selves.

The villagers celebrate the return of their cutie marks and true selves, giving real smiles instead of fake ones. The Mane Six's cutie marks start pulsating, and they sense that their job in this village is complete and that the castle map is calling them somewhere else. Before they leave, they decide to join in the villagers' partying for a little while.

Rarity: Oh, this is horrible! [crying]
Fluttershy: There, there, Rarity... It's not so bad...
Rarity: Yes, it is! Look at those drapes! I have no idea if they're tacky or not!

Applejack: [grunts] This door's shut tighter than a... summer of...
[pulsing noise]
Applejack: ...piglets in... shoot! I can't even make countryisms no more!

Party Favor: Didn't you see what just happened out there?! Your friend has accepted our way! You will all accept our way! It's only a matter of time!
Rainbow Dash: This guy's a barrel of laughs.
Pinkie Pie: [flatly] Laughs don't come in barrels. They come from inside you as your body's response to delight.

Starlight Glimmer: Wha... What are you looking at?! They're the problem, not me!
Party Favor: How could you?
Double Diamond: You said cutie marks were evil! You said special talents led to pain and heartache!
Starlight Glimmer: They do! Don't you see?! Look at them!
Sugar Belle: Then why? Why did you take ours and not give up your own?
Starlight Glimmer: I... I had to, you fools! How could I collect your cutie marks without my magic?!
Night Glider: But the staff has all the magic we need!
Starlight Glimmer: The staff is a piece of wood I found in the desert! It's my magic that makes all this possible! You'd all still be living your miserable lives thinking you're better than everypony else if it weren't for my magical abilities! I brought you friendship, I brought you equality, I created harmony!

Twilight Sparkle: Everypony has unique talents and gifts, and when we share them with each other, that's how rea—
Starlight Glimmer: QUIET!

Starlight Glimmer: Wh- I studied that spell for years! How can you-
Twilight Sparkle: I studied magic for years too! But what I didn't know then was that studying could only take me so far. Each of my friends has taught me something different about myself! It was their unique gifts and passions and personalities that helped bring out the magic inside of me! I never would have learned that I represent the element of magic without these five! And I certainly wouldn't be here to stop you now!
Starlight Glimmer: Spare me your sentimental nonsense! I gave these ponies real friendships they never could have had otherwise!
Double Diamond: How do you know that? You never even gave us a chance!

Pinkie Pie: This feels like an ending! It doesn't have to be an ending yet, right? 'Cause that Sugar Belle can bake! 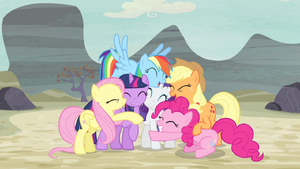