The Cutie Pox is the sixth episode of the second season of My Little Pony Friendship is Magic and the thirty-second episode overall. The episode centers around the titular illness that afflicts Apple Bloom, which causes many cutie marks to appear all over her body, making her constantly utilize the skills they symbolize. The term pox is used to describe a variety diseases characterized by pockmarks, and in the archaic sense, it may refer to disease in general.

The library scene was at the animation rough cut stage on August 2, 2011.[2][3] Two name options for the owner of the bowling alley that weren't used were Pony Bowl-ony and Mr. Incredi-Bowl.[4] There were several deleted scenes of Apple Bloom displaying more cutie mark talents, one of which was a 'scootering' talent, which outraged Scootaloo.[5]

Sweetie Belle rolls her ball into the gutter—but remains in high spirits—and Scootaloo bucks her ball and sends it flying all over the alley before it too rolls into the gutter. Apple Bloom clumsily rolls her ball and appears to knock over all of her pins. The crowd of ponies cheers, with Sea Swirl remarking, "Cool! A bowling cutie mark!" Apple Bloom excitedly examines her flank, which is still bare, and sees that the crowd's cheers were directed toward a colt who'd just gotten his cutie mark. To Apple Bloom's disappointment, her ball hadn't knocked over even one pin.

Scootaloo and Sweetie Belle comment on how much fun they had bowling, while Apple Bloom dejectedly walks alongside them. Scootaloo and Sweetie Belle try to cheer her up with a cupcake from Sugarcube Corner, a party with Pinkie Pie, and a new hat from Rarity, but none of these work, and Apple Bloom remains despondent. She sulks off alone and wanders into the Everfree Forest, where she trips over a tree root, tumbles down a small ridge, and chips a tooth. Zecora finds her and brings her to her hut to give her a potion for her tooth. Apple Bloom expresses her frustration about her cutie mark, and Zecora tells her that she simply needs to wait for the right time for it to appear.

Apple Bloom takes Zecora's tooth-fixing potion, and her tooth is instantly mended. She then looks at the various potions and tonics around Zecora's hut, looking for a possible brew to bring about a cutie mark. When Zecora begins to make a potion to help a rooster fix his morning call, Apple Bloom notices a flower called 'Heart's Desire', which causes one's talent to "come into view" and will supposedly help the rooster crow again. Zecora goes out to find amethysts to complete her potion, and Apple Bloom sets her sights on the flower in the bowl.

In the schoolyard, Apple Bloom exuberantly shows off her new cutie mark: a silver hoop. Sweetie Belle, Scootaloo, and Twist try to figure out what special talent her cutie mark represents, to which Apple Bloom reveals to be loopty-hooping. She demonstrates her skill at loopty-hooping and various other tricks, with other foals cheering her on, much to the annoyance of Silver Spoon and Diamond Tiara. Cheerilee hears the foals cheering Apple Bloom on and sees her prowess with the hoop, asking her to give the class a demonstration and help them play with hoops.

While performing an advanced hoop trick, Apple Bloom suddenly sprouts a second cutie mark: an image of plates rotating on top of poles. Diamond Tiara suggests the cutie marks are fake, but Apple Bloom denies it. Snips and Snails throw her two plates and poles. Apple Bloom balances the poles on her nose and spins the plates on top while twirling a hoop around her tail. The class is astounded by Apple Bloom's talents and cheers for her as they make their way down the streets of Ponyville. In the streets, she nimbly performs tricks such as using a well-thrown hoop to style Twilight Sparkle's mane in the manner of Rarity's.

That night, Applejack takes a tired Apple Bloom home, and Granny Smith and Big McIntosh congratulate her. Applejack tells her how proud they are of her getting not one but two cutie marks. After a long day of performing tricks, Apple Bloom heads off to bed.

Late at night, Applejack is rolling around in bed, being kept awake by an incessant tapping. She gets out of bed to investigate and discovers that the sound is coming from Apple Bloom's room. Upon opening the door, she sees Apple Bloom tapping her hooves frantically, as well as yet another cutie mark on Apple Bloom's flank: a tapping shoe. Apple Bloom, unable to stop herself from exercising her "talents" all at once, cries out for help while Applejack looks horrified.

Unable to stop Apple Bloom from moving, Applejack takes her to Twilight's library to search for a cure. Spike retrieves the book Perplexing Pony Plagues for Twilight, and locates Apple Bloom's affliction: "cutie pox". The book describes this bizarre disease as being "a puzzling pony plague" that afflicted a population of ponies in the Paleopony period. Random cutie marks appeared all over the bodies of those affected, making them perform the talents that came with them. Unfortunately, neither a cure nor the cause of the breakout was ever discovered, and the cutie pox disappeared as mysteriously as they had arrived. At that moment, Apple Bloom sprouts a fourth cutie mark in the form of a fleur-de-lis and starts to speak in French. The three ponies decide it best to seek out Zecora for help.

While on their way to Zecora's home, Apple Bloom's cutie pox begins to progress more quickly, with each new mark causing her to perform strange and arduous talents, mostly at the same time. The townsponies become scared of Apple Bloom's strange behavior, believing her to be hexed, cursed, or enchanted. Spike tactlessly points out the true nature of the disease to the townsponies, causing them to panic, lock themselves into their houses, and run off. When Zecora comes into town, she almost thinks that the ponies were still afraid of her. Twilight and Applejack tell her of Apple Bloom's affliction. Zecora says that around the time Apple Bloom was alone in her hut, some of her ingredients "mysteriously" went missing, especially the rest of a certain special flower. Fortunately, Zecora has the cure for the cutie pox: the Seeds of Truth, which only bloom when "words true and pure" are spoken.

Applejack plants the seeds in the ground and pleads for somepony to tell the truth. Pinkie Pie attempts to confess to eating more corncakes than she claimed she did, but the seeds don't bloom. Apple Bloom, speaking English again, finally admits to her misdeed. She admits her cutie marks are all fake and that she stole the ingredients—most importantly the Heart's Desire—from Zecora. During the process, the townsponies all begin to calm down when they hear Apple Bloom's truth. Just as promised, the Seeds of Truth bloom into a flower, which Apple Bloom quickly ingests, causing her cutie pox to vanish.

Apple Bloom apologizes to everyone for the entire ordeal (including lying) - especially to Sweetie Belle and Scootaloo for getting too carried away with her cutie mark quest and to Zecora for taking her ingredients without permission. Realizing how sorry Apple Bloom is for everything and how she learned from her mistakes, Zecora and Apple Bloom's friends accept her apology.

The importance of patience

Apple Bloom writes a letter to Princess Celestia about what she learned: there are no shortcuts to getting something you desire the most, including a cutie mark, and that good things come to those who wait.

However, immediately after Spike sends the letter, the Cutie Mark Crusaders decide they've waited long enough and run off into the distance, eager to again try and get their cutie marks.

The Heart's Desire plant is introduced by Zecora as a cure for a rooster who "lost his crow". She says that "with Heart's Desire, his talent comes into view". Apple Bloom takes interest in the plant, and encourages Zecora to leave while she eyes the bowl with the plant's petals.

When Apple Bloom develops a third cutie mark and discovers that she's unable to stop performing the various talents the marks signify, she's taken to Twilight Sparkle's library. After consulting her books, Twilight diagnoses the ailment as cutie pox. "This puzzling pony plague afflicted a population of ponies back in the Paleopony period. Random cutie marks appeared all over the ponies' bodies, causing them to perform all the talents that came with them. The cause of the breakout was never discovered, and the cutie pox disappeared as mysteriously as they arrived." Twilight suggests that Zecora might have a cure.

The Seeds of Truth are the cure to the cutie pox. Zecora stops by Ponyville and witnesses all the ponies running scared from Apple Bloom's condition. She offers a cure for the cutie pox: "A cutie pox cure I have forsooth, for healing power is in the Seeds of Truth. These seeds must be planted in the ground, with the truth they'll grow and the cure is found." Apple Bloom eventually confesses that her cutie marks are all fake, and that she figured the Heart's Desire would help her get what she wanted most, so she "mixed up a special potion and put the rest of the Heart's Desire in it"; following her confession, the Seeds of Truth grow into a white-and-pink flower which Apple Bloom promptly consumes, and all of her cutie marks disappear.

One of the cutie marks Apple Bloom receives is a red shoe which causes her to dance uncontrollably, like the main character in the Hans Christian Andersen fairy tale The Red Shoes.

The equations Apple Bloom draws under the affliction of the Math cutie mark are difficult to identify without context, but the first two sections state the equivalence between integration of continuous functions and the sigma operation upon discrete functions - a concept important in digital signal processing. The meaning of the remaining three equations has yet to be determined, and they may be simply random math-symbols to fill the board.

Sweetie Belle: I know just what you need to put the bloom back on your apple.

Twilight Sparkle: Cutie pox. This puzzling pony plague afflicted a population of ponies back in the paleopony period!
Spike: Say that 10 times fast! 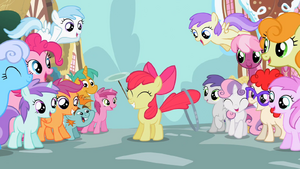