In this episode, Starlight Glimmer returns for revenge against the Mane Six and casts a spell that changes the course of Equestria's history. Two events based on the episode-"Sombraverse" and "Sombraverse Redux"-were included in Gameloft's mobile game.

An animatic from this episode was shown at the 2015 San Diego Comic-Con. The clip reveals the return of Starlight Glimmer.

All of the character designs featured in the episode were designed by Kora Kosicka and Fernanda Ribeiro.[2]

Both Zap2It and FiOS erroneously list this episode as episode 21 and lists it as having aired on October 19. The listings have since been corrected to include a November 28 airdate, but still show October 19 as the first airdate.[3]

The episode begins with Twilight Sparkle at the School for Gifted Unicorns practicing for an upcoming lecture about cutie marks. During her lecture the next day, Twilight talks about the sonic rainboom that led to her and her friends getting their marks.

In the middle of her lecture, Twilight briefly sees Starlight Glimmer in the audience, but she disappears just moments later, making Twilight nervous.

On the way back to the Castle of Friendship, Twilight worriedly wonders what Starlight could be up to, and Spike considers that she might be returning for revenge after her previous plot had been foiled.

In the castle throne room, Twilight and Spike find Starlight sitting in one of the thrones. Using a magic scroll, Starlight casts a spell that opens a portal over the Cutie Map, and she vanishes through it, leaving the scroll behind. When Spike touches the scroll, the spell on it activates again, and Twilight and Spike are dragged through the portal as well.

Twilight and Spike land in Cloudsdale Flight Camp. When they see Rainbow Dash and Fluttershy as fillies, they realize they have traveled back in time to the day Rainbow Dash performed her first sonic rainboom. During Rainbow's race against Hoops and Dumb-Bell, Starlight Glimmer interferes and stops Rainbow from doing the rainboom. Starlight's intervention has a ripple effect that prevents Twilight's friends from realizing their true talents.

As Twilight confronts Starlight about what she has done, the time portal opens again and pulls her and Spike inside, returning them to the future.

As a result of Starlight's actions in the past, history has been altered: Twilight's castle is gone, leaving only the Cutie Map; much of Ponyville has been abandoned; Sweet Apple Acres is now an industrial apple-processing plant; and the Crystal Empire is encroaching upon the rest of Equestria. They find Applejack, and she explains that when the Crystal Empire returned, King Sombra forced all of the Crystal Ponies into his army and began to wage all-out war against Equestria, and the rest of the Mane Six now serve as members of Princess Celestia's army.

Intent on setting things right, Twilight uses the scroll to travel into the past again, making sure to arrive a few minutes before they arrived last time. However, Starlight is there waiting for her, and she traps Twilight and Spike in a crystal block. She explains the spell is programmed so that if Twilight tries to use it, Starlight will always arrive before she does. After ranting that she will have her revenge on Twilight and her friends for ruining her operation in Our Town, she shoves the crystal and it plummets out of the clouds. After she frees herself and Spike from the crystal before it hits the ground, Twilight goes to confront Starlight and finds her talking with filly Fluttershy and her bullies, convincing them to be friends.

With Fluttershy no longer being bullied, Twilight approaches Rainbow Dash and tries to convince her to do the sonic rainboom, but Rainbow flies away, unnerved by Twilight's behavior and Alicorn status. As Starlight gloats, Twilight and Spike are suddenly pulled back into the future again.

When Twilight and Spike return to the future, the timeline has changed yet again, with Ponyville being covered in dense trees. Fluttershy and Pinkie Pie confront them at spear-point, accusing them of being changelings.

"All servants of Queen Chrysalis found in these woods... must be destroyed!"
— Fluttershy

Twilight Sparkle: Did Rainbow Dash look really young to you? And I didn't see a cutie mark. You don't think...
Spike: ...We traveled back in time to when Rainbow Dash raced the bullies who made fun of Fluttershy and performed her first sonic rainboom?

Twilight Sparkle: I don't know what Starlight's up to yet, but we'd better figure it out before it's too late.
Spike: Um, Twilight? I think it already is.

Twilight Sparkle: It's so good to see you! We couldn't find Pinkie or Rarity or Fluttershy or Rainbow Dash, but I just knew you'd still be here!
Applejack: Of course I am. This is my home. But who in tarnation is Pinkie Bow and Flutterdash? Or you for that matter?

Starlight Glimmer: Oh, isn't it a shame we don't live in a world where everypony is equal? No one would ever tease anyone there! Wouldn't that be nice?
Young "Dumb-Bell", Fluttershy and Hoops: Mm-hmm.

Twilight Sparkle: I know you only convinced those bullies to not tease Fluttershy to stop the rainboom!
Starlight Glimmer: Oh, that's not true. I convinced them not to be bullies because everypony should be equal. Stopping the rainboom is just a bonus. 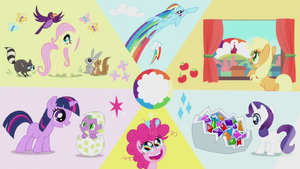