In this episode, Twilight Sparkle tries to stop Starlight Glimmer from changing history, but she fears her efforts may be in vain. Two events based on the episode-"Changelingverse" and "Lunaverse"-were included in Gameloft's mobile game.

All of the character designs featured in the episode were designed by Kora Kosicka and Fernanda Ribeiro.[3] Jim Miller made a Twitter post recalling the house where Sunburst abandoned Starlight when they were foals having been intended to be Starlight's.[4]

This was Jayson Thiessen's final episode as a consulting director before he began working full-time on the 2017 My Little Pony movie.[5]

Both Zap2It and FiOS erroneously list this episode as episode 20, showing it as having aired on October 19. The listings have since been corrected to include a November 28 airdate, but still show October 19 as the first airdate.[6]

Land of the changelings

Twilight Sparkle and Spike insist to Fluttershy, Pinkie Pie, and the other ponies that they are not changelings, but they don't believe them. Zecora appears and covers Twilight and Spike in a magical salve that indicates they are from a different reality. As the group walks through the woods, Zecora explains how Queen Chrysalis rose to power, and Twilight explains how Starlight Glimmer's actions have changed history, resulting in this alternate timeline.

Zecora leads Twilight and Spike to a wooded camp, where ponies hide away from Chrysalis' sight. When Applejack, Rarity, and Rainbow Dash appear and say Chrysalis has attacked Ponyville, Zecora immediately recognizes them as changelings in disguise. Applejack is revealed to be the changeling queen herself, and her army descends upon the camp. As Zecora and her resistance fend off the attack, Twilight and Spike race back to the Cutie Map and return to the past.

Upon returning to past Cloudsdale, Twilight faces off against Starlight in a clash of magic. Filly Rainbow Dash stops the race to watch their battle, causing the sonic rainboom to be prevented again. Twilight and Spike are pulled back to the future once more.

Twilight and Spike are returned to a future of perpetual nighttime, and a group of timberwolves chases them toward the Castle of the Two Sisters. As a result of the timeline being altered again, the castle still stands, Nightmare Moon rules over Equestria, and Rarity and Rainbow Dash are her followers.

Upon learning that Twilight has been traveling through time, Nightmare Moon demands to know the source of her time magic, intending to change history herself so that the Elements of Harmony are never discovered. She even takes Spike hostage to ensure Twilight's compliance. Twilight leads Nightmare Moon to the Cutie Map to dispose of the timberwolves before she catches her off-guard, rescues Spike, and uses Starlight's scroll to return to the past once again.

Twilight returns to the past yet again, determined to stop Starlight Glimmer's efforts. A montage sequence follows in which Twilight fails to stop Starlight from preventing the sonic rainboom and she is returned to a different future each time. In one alternate timeline, Lord Tirek lays waste to Equestria virtually unopposed. In another timeline, an unreformed Discord rules Equestria with his chaos. In yet another, Flim and Flam bulldoze entire forests to fulfill their needs.

Despite her numerous failures, Twilight refuses to stop trying, even if her conflict with Starlight could last for eternity. Just before she is pulled back to the future, Twilight drags Starlight with her to show her the outcome of her actions.

When Twilight, Spike, and Starlight return to the future, Equestria has been reduced to a desolate wasteland. Though initially shocked by the outcome, Starlight refuses to believe this is the result of the Mane Six not being friends, and she lashes out at Twilight for ruining what she built. Twilight says she doesn't know what Starlight has been through to make her this way, and Starlight angrily decides to show her, bringing the three back to the past one more time.

Starlight takes Twilight and Spike to her old hometown, where she was once best friends with a unicorn colt named Sunburst. After an incident in which Sunburst stops a tall stack of books from falling on top of Starlight, Sunburst gains his cutie mark. When he leaves for Canterlot to study magic amidst praise from the whole town, Starlight is left feeling abandoned. She never makes another friend out of fear that a cutie mark would take them away from her too.

Starlight brings the three back to past Cloudsdale and prepares to stop the rainboom from happening again. She also prepares to rip the time travel scroll so that her changes to the timeline are permanent. Twilight pleads to Starlight once more, having witnessed numerous terrible futures. Starlight again refuses to accept that Twilight's relationship with her friends is special, but Twilight tells her the Mane Six's differences are what make their friendship strong.

Starlight is still heartbroken over her friendship with Sunburst, so Twilight tells her to make new friends and work out problems that arise together. She extends her hoof to Starlight, and Starlight slowly takes it as the sonic rainboom goes off uninterrupted.

Friends can change the world

Twilight, Starlight, and Spike return to the future with the original timeline restored, and the time travel scroll vanishes in a flash of light. Twilight's friends arrive to see what is going on, and they are troubled by Starlight's presence.

A short time later, Twilight tells her friends about her ordeals while traveling through time, and they discuss the best way to deal with Starlight Glimmer. Applejack believes that Starlight is too powerful to allow to roam free, so Twilight decides to help her learn more about friendship and make Equestria a better place, and the rest of the Mane Six agree.

In recognition of her new beginning, Starlight Glimmer leads her new friends in an uplifting song about how friendship changes the world. Starlight apologizes to the ponies she wronged in the past, and the episode ends on a large group shot of the Ponyville ponies with Starlight and the Mane Six in the middle.

Zecora: Time is a river, where even the tiniest changes seen can lead to a cascade of effects downstream.

Twilight Sparkle: What are you doing? You have to finish your race!
Young Rainbow Dash: No way! This is way more exciting!

Spike: Rarity, it's me!
Rarity: I don't socialize with dragons. I don't know anypony who would.

Twilight Sparkle: I have to get back to the map so I can stop Starlight from changing the past, because every present I come to is worse than the last!
Nightmare Moon: Time travel, you say? Now that's something I would like to see.

Starlight Glimmer: What's so special about your friends?! How can a group of ponies that are so different be so important?!
Twilight Sparkle: The differences between me and my friends are the very things that make our friendship strong!
Starlight Glimmer: I thought Sunburst and I were the same. But we turned out different, and it tore our friendship apart!
Twilight Sparkle: So try again! Make new friends! And if something that you can't control happens that changes things, work through it together! That's what friendship is! And it's not just my friendships that are important to Equestria! Everypony's are! When yours ended, it led us here. But just imagine all the others that are out there waiting for you if you just give them a chance!
Starlight Glimmer: How do I know they won't all end the same way?
Twilight Sparkle: I guess it's up to you to make sure they don't.

Rarity: What in Equestria was that?!
Fluttershy: Is everypony okay?
Pinkie Pie: [squee] Can you do it again?

Rainbow Dash: I mean, I knew my rainboom was awesome, but I never thought all of Equestria depended on it!

Starlight Glimmer: [gulps, exhales] I know there's no excuse for what I did, but I want you all to know that I'm ready for whatever punishment you think is fair.
Twilight Sparkle: I've been thinking a lot about how badly Equestria fared without just one group of friends. Because even when one friendship dies, the results can be disastrous.
Starlight Glimmer: I know first-hoof how true that can be. 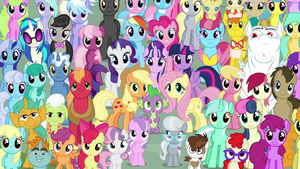