The End in Friend

The End in Friend is the seventeenth episode of season eight of My Little Pony Friendship is Magic and the one hundred and eighty-sixth overall.

In this episode, Rarity and Rainbow Dash begin to question why they are friends when they can't find anything they both like to do together.

This episode aired on August 11, 2018, on Boomerang in Australia,[1] seven days ahead of its scheduled premiere on Discovery Family. It was also released on TFOU MAX ​[​specify​]​ and aired on Nickelodeon in Denmark, Norway and Sweden on August 16, 2018.[2]

Why are we friends?

The episode begins at the School of Friendship, with Rarity in a hurry to meet up with Rainbow Dash for their day out together. Starlight Glimmer stops her and asks her to serve as a brief example in Twilight Sparkle's school lesson. Eager to be an example for the school students, Rarity agrees and goes to Twilight's classroom, where she discovers that Rainbow Dash had been called upon for the same reason she was.

Twilight, teaching the students about compromise in friendship, explains that Rarity and Rainbow Dash perfectly exemplify compromise by finding time to spend together even though they have different interests and jobs. However, when asked how they are going to spend their day together, the two are unable to agree on an activity, with Rarity wanting to go shopping and Rainbow Dash wanting to play buckball. Gallus questions further how the two can be friends if they have nothing in common.

Rainbow and Rarity cite the mutual friends they share and the times Rainbow saved Rarity's life during the Best Young Flyer Competition and Rarity proved Rainbow's innocence of a crime she didn't commit, but they are unable to think of anything else. Starlight Glimmer states that friendships sometimes cannot be explained and must be seen in action.

The "end" in friendship

Rainbow Dash and Rarity proceed with their day out together, and Twilight and her students observe them from the side to watch their friendship in action. The two start out by playing a game of buckball against Braeburn's Appleloosa team. However, Rarity is too preoccupied with designing a line of buckball-themed leisure wear to focus on the game, much to Rainbow's frustration. Afterward, the two go shopping at a clothing store, but Rainbow gets annoyed by all the glittery stuff on display and incredibly bored when Rarity takes so long picking what boots to purchase.

Later, Rainbow Dash and Rarity go gem-collecting in a cave, and they finally start to have fun together at first. But while Rarity is more concerned with collecting gems for a new piece of clothing she's working on, Rainbow is more concerned with finding hidden treasure. While trying to open what she believes to be a secret chamber, Rainbow accidentally knocks over Rarity's wagon, causing all the gems she collected so far to shatter into pieces.

Rainbow and Rarity's frustration with each other grows even more, with Rainbow accusing Rarity of not caring about anything she likes and vice-versa. Twilight assures the observing students that this is merely a disagreement that even close friends have from time to time, but Rarity and Rainbow are so upset about not liking the same things that they declare their day together—and their friendship—over.

In one another's shoes

Rainbow Dash and Rarity sit with Starlight Glimmer in her guidance counselor's office and air their multiple grievances about each other. Tired of their constant complaining, Starlight suggests they put themselves in each other's shoes. In the school library, Starlight mentions that since Rainbow likes the Daring Do book series and Rarity likes Shadow Spade, they should read each other's favorite book in order to reconnect as friends, and Rarity and Rainbow begrudgingly agree.

When Starlight, Rarity, and Rainbow meet up again later to discuss the books they read, Rarity questions the over-the-top action sequences and ridiculous character names in Daring Do, and Rainbow critiques the overly detailed and boring clothing descriptions in Shadow Spade. When Rarity mentions certain plot twists in Shadow Spade, Rainbow reveals that she never actually read the book. As their arguing gets even worse, Starlight decides to bring in reinforcements to help resolve the matter.

The case of the missing amulet

As Rarity and Rainbow Dash's arguing draws attention from nearby ponies, Starlight returns and alerts them to a problem back at the school. In Twilight's office, Twilight searches frantically for something. When Starlight arrives with Rarity and Rainbow, she explains that the Amulet of Aurora, one of the magical artifacts that Princess Celestia gave to the school, has gone missing. She explains further that the amulet can control water tides and summon tsunamis and that they must find it before it falls into the wrong hands.

With Rainbow Dash's expertise in treasure-hunting and Rarity's knowledge of mystery-solving, Twilight is confident that they can get the amulet back by working together while she and Starlight work on a locator spell. In their inspection of Twilight's office, Rarity finds that the other artifacts are present and untouched, and Rainbow discovers a trail of glitter that leads out of the school and into the nearby woods.

Rainbow recognizes the glitter as Azurantium residue, the same metal from one of the Daring Do books, and a clueless Rarity reveals she didn't read Rainbow's book just as Rainbow didn't read hers. Angered that Rarity gave her a hard time earlier for not reading Shadow Spade, Rainbow Dash declares that she is never speaking to her again after they recover the Amulet of Aurora.

As Rainbow Dash and Rarity follow the trail of Azurantium through the woods, Rarity discovers claw prints in the dirt, and Rainbow sees the Azurantium trail lead over a bubbling swamp. With the swamp too deep for Rarity to wade through and the steam geysers too hot for Rainbow to fly over, Rarity constructs a raft out of tree bark and vines. Rainbow is surprised and impressed by Rarity's ingenuity and resourcefulness, and she uses her wings to propel the raft forward, carrying herself and Rarity safely over the swamp.

At the other end of the swamp, Rainbow and Rarity lose the trail of Azurantium, and they encounter a Bufogren, a large, frog-like creature with six eyes, overly sensitive ears, a soft-speaking voice, and horrible-smelling breath. Rarity and Rainbow ask the Bufogren about the Amulet of Aurora, but they are unable to endure his foul breath long enough to hear him talk. Using some nearby mint leaves and a tuft of cloud collected by Rainbow Dash, Rarity produces a paste that, upon ingestion, leaves the Bufogren's breath smelling minty fresh. They ask him again about the amulet, and the Bufogren points them to a trail of Azurantium leading up the mountain.

Rarity tells Rainbow Dash to fly up and retrieve the amulet, but Rainbow brings Rarity along, not wanting to leave her behind in the swamp. On a ridge up the mountainside, they come across a locked door, and Rarity picks the lock using the stiletto heel of one of her recently purchased boots. Rainbow apologizes to Rarity for the harsh words she said earlier, admitting that some of her interests are actually cool. Likewise, Rarity apologizes for treating Rainbow's interests as less important than her own. The two reconcile with a hug and head through the unlocked door together.

On the other side of the door, Rarity and Rainbow Dash wind up back at the School of Friendship, and at the end of the trail of Azurantium, they find Spike holding the Amulet of Aurora. Twilight and Starlight reveal that they set up a fake artifact theft to get Rarity and Rainbow to work together and resolve their differences. Rarity and Rainbow admit that they truly needed this lesson, and the students learn that two individuals don't have to love the same things in order to have fun together and that sharing in each other's interests makes their friendship interesting and exciting.

Twilight Sparkle: See? Good friends always work through their differences.
Starlight Glimmer: Even if it takes a little help.

Twilight Sparkle: Rainbow Dash and Rarity have very different interests that keep them busy. But being friends is so important to them, they always manage to make time for each other.

Gallus: You guys have nothing in common. How can you be friends?

Starlight Glimmer: It may seem like Rarity and Rainbow Dash don't have that much in common when you try to put it into words, but sometimes friendships can't be explained. You just have to see them in action to understand.

Rainbow Dash: Rarity! Are you even paying attention?!
Rarity: What? Oh! I mean, of course! Uh, I held my bucket and everything!
Rainbow Dash: But you have to catch the ball!
Rarity: Really? Well, that sounds dangerous.

Rarity: Are they too in style?
Rainbow Dash: Uh, isn't that what you want them to be?
Rarity: Oh, yes, yes. But they should be ahead of the curve. If they're in fashion right now, then they're practically already out.
Rainbow Dash: That doesn't make any sense.

Twilight Sparkle: Rainbow Dash and Rarity are just, uh, showcasing an aspect of friendship called "banter", the playful and friendly exchange of remarks. [laughs nervously] It's all in good fun.

Rarity: You ruined my gems!
Rainbow Dash: Yeah, well, you ruined my treasure hunt!
Rarity: Ugh! This wasn't about treasure! It was about finding gemstones for my winter collection!
Rainbow Dash: Who cares about clothes?! We're supposed to be on an adventure together!

Rainbow Dash: You don't care about any of the things I like! It's always about you and your boring fashions!
Rarity: Oh, puh-lease! You don't even give my interests a chance! You have absolutely no respect for the finer things! No respect, I tell you!

Starlight Glimmer: Guidance counseling is for talking out your problems, not telling me everything that's ever happened in the history of Equestria!

Rarity: You see, if you didn't know that Sir Fluffingsworth von Radishfield wears only silk, double-breasted waistcoats, you'd never deduce that he, in fact, was the culprit!
Rainbow Dash: W-Wait. He was?
Rarity: [gasps] You didn't even read it!

Rainbow Dash: Don't worry, Twilight! I know tons about searching for lost treasure!
Rarity: And if I follow the culprit's clues, I'm certain I can find who took your amulet!
Twilight Sparkle: Thank you! I'll feel so much better knowing you two are looking for it together!

Rainbow Dash: Seriously?! After giving me all that grief, you didn't read mine either?!
Rarity: Oopsie?

Rainbow Dash: How did you know how to do that?
Rarity: Mmm. We may have been friends for a super-long time, but you don't know everything about me yet.

Rainbow Dash: High heels could do that?
Rarity: And you called them "useless".
Rainbow Dash: [sighs] I shouldn't have said that. Or made fun of the other stuff you like to do. Some of it's actually sorta neat.
Rarity: I... owe you an apology, too. Buckball may not be my thing, but it's something you enjoy. And you're very good at it. I never should've treated your interests like they were worth less than mine.
Rainbow Dash: Soooo... does this mean we're still friends?
Rarity: I would very much like that.

Smolder: So even though you don't like any of the same stuff, you two are friends again?
Rarity: Heh. Always. I think we just needed a teensy reminder.
Rainbow Dash: Yeah. We don't have to love the exact same things to have fun together. I mean, imagine if we did! How boring would that be?
Rarity: When we give each other a chance to share the different things we enjoy, it can be surprisingly wonderful! 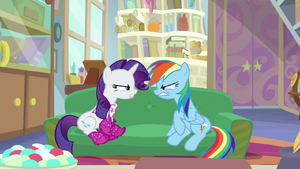 The End in Friend image gallery