The Ending of the End - Part 1 is the twenty-fourth episode of season nine of My Little Pony Friendship is Magic and the show's two hundred and twentieth episode overall.[1] It is the first part of a two-part episode, and it premiered as part of the 90-minute series finale.

In this first part, Queen Chrysalis, Lord Tirek, and Cozy Glow unleash their unified might on Equestria, and it's up to the Mane Six to save the kingdom.

This episode was originally scheduled to air on September 22, 2019 on Polish channel MiniMini+, but was replaced with a rerun of an earlier episode. However, it was still released the following day on the nc+ GO on-demand service.

When the episode premiered in the United States, it did not include the "To be continued" card or the credits, with the credits of all three final episodes combined at the very end of The Last Problem.

According to Jim Miller, Discord impersonating Grogar was planned since the beginning of the season, as they wanted Chrysalis, Tirek, and Cozy Glow to be the main antagonists because they had more connection to the main characters.[2]

The episode begins outside Canterlot, where Queen Chrysalis—disguised as Crackle Cosette—intercepts a unicorn baker and informs him that the Earth ponies and Pegasi are selfishly hoarding food for themselves and refusing to share with the unicorns. In addition to trying to unlock the power of Grogar's Bewitching Bell, Chrysalis, Lord Tirek, and Cozy Glow have also been sowing distrust between the pony tribes and getting them to turn on each other.
Back at Grogar's lair, using the book they stole from the Canterlot Archives in The Summer Sun Setback, the villains learn that the Bell can drain magic from others. With a spell from the book, they transfer the magic inside the Bell to themselves, making them extremely powerful and transforming Cozy Glow into an Alicorn. When Grogar returns with another artifact to use against the Mane Six, Chrysalis, Tirek, and Cozy appear before him and put their plan to overthrow him into action. Using his own Bewitching Bell against him, the other villains drain him of all his power, and he is revealed to be Discord in disguise.

"That was unexpected."
— Lord Tirek

With his power completely drained, Discord is forced to retreat on foot. The villains, while shocked by their leader's true identity at first, allow him to escape in order to put the rest of their plans into motion.

Calm before the storm

Meanwhile, in Canterlot, final preparations are underway for Twilight Sparkle to assume the role of ruler of Equestria in Celestia and Luna's place. Twilight is surprisingly calm about the transition, and she appoints Spike as her royal advisor as thanks for everything he has done for her over the years. In the city, Fluttershy and Rarity are collecting supplies for Twilight's coronation, but the streets are largely abandoned, and any ponies they encounter are reclusive and hostile toward them.
Similarly, Rainbow Dash clears the skies of any bad weather, but receives no help from other Pegasi to complete this task. In the castle courtyard, Applejack sets up baskets of apples, but a royal guard constantly watches her with suspicion and addresses her as "Earth pony" instead of by name. Lastly, Pinkie Pie gets caught in the middle of a dessert fight between Mrs. Cake and the castle kitchen staff.

Discord finally arrives after traveling an extremely long distance on foot and confesses to his friends that he is the one who brought back King Sombra and Chrysalis and released Tirek and Cozy Glow from Tartarus.

In the castle throne room, Discord explains to the ponies and princesses that he assumed the identity of Grogar and brought the biggest villains of Equestria together as part of a plan to boost Twilight's confidence as a ruler when she defeated them. Despite Discord's good intentions, the ponies are deeply upset by his actions and poor planning, and Twilight loses confidence in herself, believing none of her and her friends' successes were their own.

After some words of encouragement from her friends, Twilight tells Spike to send letters to their other friends and allies across Equestria. Star Swirl the Bearded and the other Pillars of Old Equestria are tasked with guarding the border to Canterlot; Shining Armor and Princess Cadance are told to serve as Equestria's last line of defense; and Starlight Glimmer and Trixie are warned about Chrysalis' imminent arrival.

"The ultimate battle for the fate of Equestria is coming!"
— Twilight Sparkle

Back at Grogar's lair, Chrysalis, Tirek, and Cozy discuss what to do with Discord's chaos magic, with Tirek believing only Discord is capable of handling it. When Cozy Glow offers to be a test subject to absorb Discord's magic, she briefly goes mad with power, but the magic's chaotic nature proves too unstable for her to control. The villains decide to keep Discord's magic stored inside the Bewitching Bell, and they set out to conquer Equestria.

The Legion makes their move

As Twilight rallies her friends and the Canterlot royal guard together in preparation for the villains' impending attack, Cozy Glow appears before them and attacks them with her newfound Alicorn might. Meanwhile, on the outskirts of Canterlot, Tirek faces off against the Pillars of Old Equestria. With the power granted to him by the Bewitching Bell, Tirek easily dispatches the Pillars and drains them of their magic.
In Ponyville, Starlight, Trixie, and the Young Six are evacuating the School of Friendship students to the crystal catacombs underground. When Chrysalis arrives seeking revenge on Starlight, Starlight entrusts Trixie with the students' safety while she faces Chrysalis alone. Upon teleporting herself and Chrysalis to the Arctic North, Starlight briefly gains the upper hand and buries Chrysalis under an avalanche of snow. However, Chrysalis—empowered by Grogar's Bell—overwhelms Starlight and captures her.

Pushed to the brink

At Canterlot Castle, Cozy Glow overpowers the royal guard and even drains Celestia and Luna of their magic with the Bewitching Bell. Twilight and her friends fight back and disorient Cozy with unpredictable, non-magical attacks. Just as they overwhelm and surround Cozy, Chrysalis and Tirek arrive to back her up, forcing Twilight to protect herself and her friends with a barrier. The villains gloat over their apparent victory, but Twilight is certain that they will be defeated as long as Equestria is united in friendship.

The villains laugh at Twilight's sentiment, remarking on the efforts they made to turn the pony races against each other, and they proceed to completely obliterate a sizable portion of the castle. After shattering Twilight's barrier, the villains prepare to finish her off, but Rarity distracts them by hurling a boulder at them. When the villains blast the ponies with magic again, the ponies shield themselves behind a piece of the broken castle wall.

Twilight's friends tell her to escape while they hold off the villains' attack. Though Twilight refuses to leave her friends behind, they believe she will come up with a plan to save the day. At her friends' insistence, Twilight tearfully teleports away while the others are completely overwhelmed by Chrysalis, Tirek, and Cozy's power.

Twilight Sparkle: We've faced enemies of Equestria before. And we've always succeeded, no matter the odds. That wouldn't be possible without all of you.
Discord: You're welcome!
Spike: Dude, read the room. 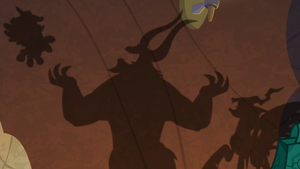 The Ending of the End - Part 1 image gallery

Retrieved from "https://mlp.fandom.com/wiki/The_Ending_of_the_End_-_Part_1?oldid=2150219"
Community content is available under CC-BY-SA unless otherwise noted.