The Ending of the End - Part 2

The Ending of the End - Part 2 is the twenty-fifth episode of season nine of My Little Pony Friendship is Magic and the show's two hundred and twenty-first episode overall.[1] It is the second part of a two-part episode, and it premiered as part of the 90-minute series finale.

In this second part, Twilight Sparkle and her friends face their ultimate battle while Equestria is divided in disharmony.

This episode was originally scheduled to air on September 23, 2019 on Polish channel MiniMini+, but was replaced with a rerun of an earlier episode. However, it was still released the following day on the nc+ GO on-demand service.

When the episode premiered in the United States, it did not include the recap, the theme song, or the credits, with the credits of all three final episodes combined at the very end of The Last Problem.

Escape from the Legion

After defeating Twilight Sparkle's friends and the Pillars of Old Equestria in the previous episode, Queen Chrysalis, Lord Tirek, and Cozy Glow imprisons them in the catacombs under Canterlot Castle, using the magic-canceling shards of Chrysalis' old throne to keep them subdued. Tirek believes they should hunt down Twilight, but Chrysalis is confident in their power granted by the Bewitching Bell.

As the rest of the Mane Six try to figure out an escape, Discord apologizes for causing such a crisis and promises to make amends for it. As the villains debate how to make use of all the magic they have stolen, Discord offers to tell them how to use his chaos magic. Tirek refuses to trust Discord, and Discord is equally distrusting of Tirek after he betrayed him during their previous alliance.

When Discord insults Tirek, Tirek blasts him with magic; Discord reflects the blast off a crystal rock, and it strikes Starlight Glimmer's cage, allowing her to break free. Starlight teleports around the chamber, evading the villains' magic attacks, and releases the other captured ponies from their cages. She, Princess Celestia, Princess Luna, and Discord keep the villains preoccupied while the rest of the Mane Six and Spike escape to find Twilight.

Upon escaping from the catacombs under Canterlot Castle, Twilight's friends discover the unicorns boarding themselves up inside the School for Gifted Unicorns and leaving the Earth ponies and Pegasi to their own affairs. In search of Twilight, the ponies go to Ponyville, where Earth ponies have gathered together from other towns and are in a state of extreme panic. With no sign of Twilight, the ponies try to determine where she is, and Spike has an idea.

At the Crystal Empire, Twilight's friends finally find her in one of the palace rooms, where she has been hard at work looking for a way to stop Chrysalis, Tirek, and Cozy Glow but failed to find one. After the destruction of the Tree of Harmony, the rise of the villains to supreme power, the abandonment of the School of Friendship, and the pony races being driven apart, Twilight has lost all hope that they can win. To make matters even worse, the growing distrust and animosity between the pony races brings the return of the windigos.

As Ponyville, Cloudsdale, and Canterlot close themselves off from other cities, Twilight falls even deeper into utter despair. With words of encouragement and a little tough love, the rest of the Mane Six and Spike place their complete trust in her and convince her to fight in spite of the overwhelming odds. Inspired by their words, Twilight thinks of a plan to face the villains and tells Princess Cadance and Shining Armor to protect Flurry Heart as Equestria's last hope if they fail.

Pinkie Pie: What are we gonna do, Twilight?!
Twilight Sparkle: The same thing we do every time, Pinkie. Try to save the world!

Back in Canterlot, after Starlight Glimmer, Discord, and the princesses are imprisoned again, Chrysalis, Tirek, and Cozy discuss whether or not to eradicate the windigos. Just then, the Mane Six and Spike appear in an open field outside the city, and the villains travel down to confront them. Twilight tells Applejack, Fluttershy, Rarity, and Spike to retrieve the Bewitching Bell while she, Pinkie Pie, and Rainbow Dash serve as a distraction.

Twilight, Pinkie, and Rainbow face off against Chrysalis, Tirek, and Cozy and keep them occupied while the others try to steal the Bell, but the villains quickly realize what they are up to and prevent any attempt to take it. When Chrysalis, Tirek, and Cozy threaten serious harm to Spike, the Mane Six surrender, and the villains prepare to finish them off. They blast the ponies with powerful magic, but they are unexpectedly protected by a magic barrier with no idea who created it.

Just then, a giant army of ponies, dragons, griffons, changelings, Hippogriffs, yaks, and multiple other creatures appears over the hill to provide backup for the Mane Six. As the ponies and creatures overwhelm Chrysalis, Tirek, and Cozy with their numbers, the unicorns levitate the Mane Six to safety. Twilight is shocked to see ponies and creatures working together after everything the villains did to drive them apart, and the Young Six appear.

The Young Six explain that, as ponies and creatures panicked from the presence of the windigos and isolated themselves from the other races, they and their fellow students used everything they learned at the School of Friendship to bring the races together again and convince them to fight alongside each other. Twilight is overjoyed that her opening the school turned out to be a good thing.

Just as Chrysalis, Tirek, and Cozy fight through the Equestrian army's forces, Twilight confronts them directly and delivers an impassioned speech about the Magic of Friendship and how, despite how much darkness there is in the world, there will always be those who seek out the light. Her passion brings her friends, the Young Six, and the Pillars of Old Equestria to her side, and the power of their combined magic creates a rainbow of light that banishes the windigos and strips the villains of their stolen strength.

With the villains defeated, Discord claims the Bewitching Bell and returns the magic of everyone who had theirs drained. Celestia and Luna stand before the defeated villains and, at Discord's suggestion, imprison them in stone for their crimes against Equestria. Celestia expresses how proud she is of Twilight for overcoming her greatest adversity and recognizes that she is officially ready to rule Equestria.

Twilight also feels she is finally ready to rule, but for her first royal decision, she decides to postpone the coronation until Canterlot Castle is rebuilt so that she and her friends can spend some quiet time enjoying donuts at Joe's donut shop. Together, the seven friends acknowledge this as the end of one era and the beginning of a new, better one.

Twilight Sparkle: We don't have the Elements of Harmony anymore. How can you all be so calm about this?
Spike: Because, even if you don't believe you can do this, we do. We believe in you. In us.
Applejack: The truth is, all our lives wouldn't be the same if we hadn't met. We're better off because of our friendship with you. So when you say you haven't made a difference, that's just not true. You've made a big difference to us.
Twilight Sparkle: Thank you. Sometimes even the Princess of Friendship needs a reminder that there's more to the Magic of Friendship than rainbow lasers.
Spike: Although that part is pretty cool.

Sandbar: We all know the story of Hearth's Warming Eve! We can defeat the windigos together!
Berryshine: You really think if we all sing a couple songs, everything will be fine?
Sandbar: It's not just singing that saved the founders of Equestria! It's what it represented!

Rasberry Dazzle: Earth ponies, unicorns, and Pegasi becoming friends! We learned at Twilight's school that friendship is the most powerful magic there is!

Hyper Sonic: Focusing on our differences keeps us divided! Villains and creatures like the windigos use that division against us!

Yona: Yaks strong. Ponies strong. But yaks and ponies stronger together! Yaks must be loyal to pony friends!

Smolder: I know helping other creatures by being kind and generous sounds lame. But I've seen how powerful it can be!

Silverstream: Were we really happy by ourselves at the bottom of the ocean? Be honest! It's the ponies that showed us a better way!

Ocellus: They've taught us how powerful love and the Magic of Friendship truly is! We can't let them stand alone! We're their friends! They need us!

Applejack: How 'bout that? It's just like you said the day we opened that school.
Spike: The more creatures who know about friendship, the safer we'll be.
Pinkie Pie: We told you you had it all figured out!

Twilight Sparkle: ENOUGH! Because of you, I almost lost my way! But everycreature here has reminded me of the true power of friendship! There will always be darkness in the world, but there will also always be those who find the light! The Pillars knew this! That's why they created the Elements of Harmony! The Elements showed me and my friends how strong our friendship could be! Together we worked to bring harmony to Equestria! But there will always be more to do! Which is why we teach others about the Magic of Friendship! Others who will continue our mission after we are gone! Now I truly understand! The Elements were just symbols! The real magic has always been right here! And the more who understand how powerful friendship is, the stronger we will all be! Together!

Queen Chrysalis: You think friendship will save you?! We will always return! Nothing will ever stop—!
[splat!]

Princess Celestia: When we sent you to Ponyville, I had high hopes. When you became Princess of Friendship, I knew I made the right choice. But nothing could prepare me for how proud I am right now. Equestria is definitely in the right hooves. You are ready. 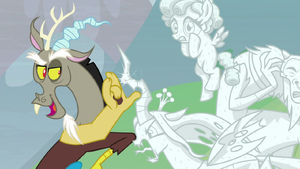 The Ending of the End - Part 2 image gallery