The Gift of the Maud Pie

The Gift of the Maud Pie is the third episode of season six of My Little Pony Friendship is Magic and the one hundred and twentieth overall. The title and the events of the episode are a reference to O. Henry's short story The Gift of the Magi.

While Rarity looks for an ideal location in Manehattan for her new store, she helps Pinkie Pie find the perfect gift for her sister Maud.

The Row & Ride Swan Boat's inclusion was asked for by Hasbro Brand.[1] Prior to the episode's premiere, a teaser image was posted to the My Little Pony Facebook page on January 10, 2016 featuring Pinkie Pie riding her Row & Ride Swan Boat next to Maud Pie and Rainbow Dash. When asked about the image on Twitter on April 5, Jim Miller replied "I'm assuming it's just a promo shot put together by Hasbro."[2]

On March 31, 2016, Nick Confalone jokingly tweeted about The Gift of the Maud Pie and Claude.[3]

An early level reading book adaptation was released by LB Kids on October 4, 2016.[4]

The episode opens with Pinkie Pie and Rarity on the Friendship Express to Manehattan. With the Canterlot branch of Carousel Boutique doing well, Rarity has decided to open a Manehattan branch. Upon arriving at the big city, Rarity gets swept up in its beauty and energy, and Pinkie Pie's older sister Maud Pie is there waiting for them.

As part of a tradition between her and her sisters, Pinkie meets with Maud in Manehattan so they can spend the day together enjoying the sights and exchange gifts at sunset. She refers to this tradition as the "Pie Sisters' Surprise Swap Day" (or "PSSSD" for short). Because she always gets an amazing gift from Maud each year, Pinkie wishes to surprise her with a specially-made rock pouch for her pet Boulder. She asks for Rarity's assistance in this endeavor, and Rarity eagerly agrees to help while also scouting locations for her new store.

Pinkie, Rarity, and Maud spend the afternoon touring the city of Manehattan, from the Mare Statue to the ice rink to a prestigious restaurant. Throughout the afternoon, Pinkie is less than subtle about her excitement for her and Maud's upcoming gift exchange, and Maud is mainly interested in sights associated with rocks.

At the Cantering Cook restaurant, Rarity keeps Maud distracted while Pinkie sneaks away to get Maud's gift at the rock pouch store. Unfortunately, while Pinkie finds the perfect pouch for Maud in the store window, the store is closed and the owner is away on vacation. In her panic over the situation, Pinkie briefly draws the attention of a Manehattan police officer.

Pinkie returns to the restaurant in low spirits and tells Rarity of her failure to get Maud's present. Rarity cheers her up and offers to help her find a different present for Maud before sunset.

Rarity takes Maud to several Manehattan stores—including a toy shop, a jewelry store, and a flea market—to see if anything catches her interest. However, Maud only expresses interest in rock-related things, causing Rarity immense frustration. When Maud offhandedly mentions that she wishes she had something to carry Boulder in, Pinkie Pie realizes that her original gift idea of a rock pouch was best.

Just then, Rarity and Pinkie spot a stallion across the street wearing the same pouch that Pinkie saw in the store window. When Pinkie catches up with him and asks if he is interested in selling it, the sleazy stallion agrees to part with the pouch in exchange for Pinkie Pie's precious party cannon.

Pinkie returns to Rarity and Maud after making the trade; though she is sad about giving up her party cannon, she says that getting Maud the perfect Pie Sisters' Swap Day present is all that matters.

Later in the park, after singing the "Pie Sisters' Swap Day Song", Pinkie and Maud finally exchange gifts. Pinkie gives Maud the rock pouch for Boulder, and Maud gives Pinkie a carton of cupcake-scented confetti for her party cannon. Despite having no cannon to use the confetti with, Pinkie loves her gift regardless.

As Pinkie enjoys her Swap Day gift, Maud asks Rarity why she isn't using her party cannon with it. Rarity tries to keep Pinkie's sacrifice a secret, but after enough piercing stares from Maud, she breaks down and confesses. Pinkie also confesses that she simply wanted to get her sister a gift as wonderful as the gifts she always receives. With this knowledge, Maud goes to get Pinkie's party cannon back.

Maud, Rarity, and Pinkie return to the sleazy stallion that Pinkie traded her cannon away to. When Maud tries to exchange the rock pouch for the cannon again, the stallion refuses. However, Maud presses him to trade, and Rarity subliminally suggests to him the anger in Maud's flat expression. Fearing Maud's angry retribution, the stallion agrees to another trade.

Pinkie Pie is happy to have her party cannon back, but she feels bad for getting two amazing gifts for their Pie Sisters' Swap Day, and vows to increase her efforts next year. Maud tells Pinkie that gift-giving is not a competition but an expression of love, and she assures that as long as Pinkie's gifts are given out of love, she will always cherish them.

Before the group leaves Manehattan for home, Rarity shows Pinkie and Maud the location she picked for her new store, which is met with their wholehearted approval. In addition, Pinkie and Maud decide to officially include Rarity in their yearly Swap Day tradition.

Rarity: A pony could get used to eating at places like this.
Maud Pie: [deadpan] I know. It's the only restaurant in the city with nepheline syenite in their bathroom tiles.

Rarity: So, Maud, that Boulder of yours is such an interesting... [clears throat] ...character. You must tell me, how did the two of first meet?
Maud Pie: [deadpan] It was a dark and stormy night. Little did I know that my life was about to change forever.

Rarity: Maud, I can't help but notice you're staring at that marvelous giraffe. I was just wondering any chance you could see yourself with it?
Maud Pie: [deadpan] Only if I had a mirror.

Rarity: [to Maud] Darling, I want to get one more picture of you with that astounding fissure in the sidewalk. And the inspiration just struck me for the perfect shot! Uh, be a dear and...go stand behind it. Okay, now just, uh, back up a little bit. Little more. And now just a little, uh, twenty yards more. Perfect! Just hold that pose! I think we found your new holiday card! 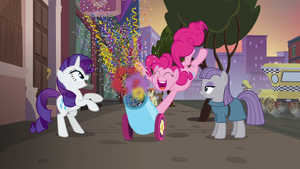 The Gift of the Maud Pie image gallery