Not to be confused with My Little Pony Best Gift Ever.

The Hearth's Warming Club is the fifteenth episode of season eight of My Little Pony Friendship is Magic and the one hundred and eighty-fourth overall. The title and concept is a reference to the John Hughes film The Breakfast Club.

This episode aired on Boomerang in Australia at 8:25am AEST, seventeen hours ahead of its scheduled premiere on Discovery Family.

The episode begins during Hearth's Warming time at the School of Friendship; while some students are excited to celebrate the holidays with their friends and families, others are more excited for the time off from classes. Twilight Sparkle points out that Hearth's Warming is also a time to remember when Earth ponies, Pegasi, and unicorns first came together during the founding of Equestria, as symbolized by the Fire of Friendship burning at the top of the Hearth's Warming tree.

Twilight officially dismisses the students for winter vacation and tells the Young Six to pack up so they can travel home for the holidays. As Spike wonders what his Hearth's Warming presents are, a cloaked figure sneaks onto the rafters and pours magical powder onto the Hearth's Warming tree, causing the Fire of Friendship to fizzle out and the Hearth's Warming decorations to be covered in purple, glue-like slime. Twilight, Rainbow Dash, and Spike spot the cloaked figure as they make their getaway, and as they give chase, they notice the culprit retreat into the student dorms.

Inside the dorms, the Young Six come out of their rooms while packing for winter break and ask what's going on. Twilight, Rainbow, and Spike show them the mess that the cloaked figure made in the school lounge and reason that one of the Young Six did it because there's no other exit out of the student dorms. The students all plead innocence, and despite Twilight giving the culprit a chance to be honest and take responsibility, no one steps forward. Therefore, Twilight makes all of the students clean up the mess while she and Rainbow Dash interrogate them one-by-one, with the guilty party being forced to stay at the school during winter break for extra friendship lessons. She adds that if no one confesses, then all of the students will have to stay at school for winter break.

Stories around the tree

While Gallus is called into Twilight's office first, Smolder tries to get one of the other four students to confess to pulling the prank, but each insists it wasn't them. Ocellus is particularly insistent because she has loved Hearth's Warming ever since it was introduced to the Changeling Kingdom one year prior. She tells her friends a story about how she and her fellow changelings started celebrating the holiday and adopted its various traditions, albeit a little bizarrely and literally than other creatures.

Twilight and Rainbow Dash call Ocellus into the office next, and Gallus also claims to be innocent of pulling the prank. As Yona gets increasingly frustrated over not being able to celebrate the holidays with her fellow yaks, she explains that the yaks celebrate a different holiday called "Snilldar Fest", which the yaks celebrate by gathering a large pile of objects and spend an entire day smashing them. She then tells her friends a story about her and her family celebrating Snilldar the previous year.

Ocellus soon returns, and Sandbar is called into Twilight's office next. When asked about her own holiday traditions, Smolder explains that the dragons celebrate the "Feast of Fire", in which the dragons come together to tell stories and the dragon who tells the best story wins a pile of gems. The most recent winning story was about a homeless dragon named Scales that was invited to the Dragon Lands by the then-Dragon Lord for a great feast. During the feast, Scales took advantage of the Dragon Lord's moment of defenselessness to seize power and claim control of the Dragon Lands for herself.

Sandbar returns, and Silverstream is called into Twilight's office next. Smolder and Yona tell Sandbar to take the blame for the prank since he already lives in Ponyville, but Sandbar refuses and would rather spend the holidays with his family. He then tells a story about a previous Hearth's Warming where his crocheted doll nearly fell into the fireplace. Finally, both Smolder and Yona are called into the office, and the rest of the students fear being unable to go home for the holidays if none of them confesses soon.

As the students lament their situation, Silverstream laments having to miss out on her own Mount Aris/Seaquestria tradition, the "Three Days of Freedom Celebration". As part of the celebration, the seaponies/Hippogriffs spend the first night in Seaquestria thanking the ocean for protecting them from the Storm King, the second day on Mount Aris celebrating the Storm King's defeat, and the third day partying with family members on land and sea and receiving gifts from Queen Novo. Gallus is so unfamiliar with the concept of family that he doesn't know what "cousins" are.

Smolder and Yona return to the lounge, and since no one confessed to the prank, they all fear being stuck at school for the holidays. Silverstream and Ocellus start to cry about not being able to see their families, and the others begin turning on one another, with Silverstream suggesting the possibility of there being more than one culprit. As a loud argument breaks out among them, Gallus breaks it up and remarks how lucky his friends are to have loved ones to spend the holidays with and share stories with.

Gallus explains that Griffonstone's "Blue Moon Festival" is the only time of year when griffons aren't mean to each other. When Silverstream says Gallus at least gets to spend it with his family, he reveals that he doesn't have a family and never felt like he had a place in Griffonstone. He also admits that he's the one who pulled the prank because he doesn't want to go home for winter break and wanted to stay with his friends for a little longer. He states that he's only confessing now so that his friends would stop fighting and be allowed to go home to be with their families.

Before Gallus can confess what he did to his teachers, Twilight, Rainbow Dash, and Spike appear, having heard the whole thing from outside the room. While Twilight commends Gallus for his honesty, she states that he still has to take responsibility for his actions, which means staying at school during winter break for extra friendship lessons. Silverstream, Ocellus, Yona, Sandbar, and Smolder offer to stay with Gallus at the school so that he won't be lonely.

Realizing that their students don't need extra lessons after all, Twilight and Rainbow invite the Young Six to a holiday dinner with the rest of the Mane Six, and the students happily accept.

"...After we finish cleaning up."
— Twilight Sparkle

Smolder: Yeah. Dragons don't do pony holidays.
Spike: Sure we do! I love Hearth's Warming Eve! It's all about friends and presents and family and... presents!

Gallus: Two whole weeks without classes. How will Ocellus survive?

Rainbow Dash: One of you must have done this! But... why would any of you want to sabotage Hearth's Warming Eve?
Young Six: [muttering nervously]
Yona: Ugh! Yak not do this! Yona offended by accusation!

Twilight Sparkle: The guilty party won't be going home over Hearth's Warming break. She or he will stay here for some one-on-one friendship lessons.
Silverstream: But what if none of us confesses?
Twilight Sparkle: Then... [sighs] I guess there's no holidays for anycreature. You'll all stay over the break.

Sandbar: How do you celebrate Hearth's Warming in Yakyakistan, Yona?
Yona: Yaks do not. Our holiday much better. Is called Snilldar Fest. Night before, yaks gather things to smash and put them in big pile. Then in morning, we smash them! In afternoon, we smash them again! In evening—
Gallus: So it's just about smashing stuff, like all your other holidays.
Yona: No! How griffon get that idea?

Ocellus: You must do something in the winter for fun.
Smolder: Well, we do have the Feast of Fire. Everydragon gets together and tells stories. The best one wins a pile of gemstones.

Smolder: [sarcastic] That's a great story. And you told it really well.
Sandbar: Yeah. It was a Hearth's Warming miracle.

Silverstream: I can't miss the Three Days of Freedom Celebration!
Gallus: [sarcastic] How long does that last?
Silverstream: It used to be only one day, but now to commemorate our escape from the Storm King, we're adding two more days of awesome!

Gallus: Wait. Hold on. "Cousins"? What are those?
Ocellus: Your aunts and uncles' children. You know, part of your family.

Silverstream: At least you get to be with your family.
Gallus: No... because I don't have a family.

Gallus: Don't worry. You won't have to tell our teachers. I will.
Twilight Sparkle: You don't have to. We already know.
Rainbow Dash: We kinda guessed it was you.

Sandbar: Hey, this reminds me of another story! "The Time I Almost Spilled Grape Juice on the White Couch"!
Smolder: Does it have a depressing ending?
Ocellus: I'm not sure pony stories work that way. 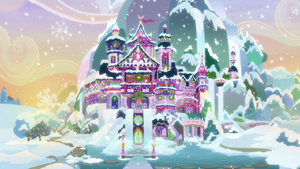