The Hooffields and McColts is the twenty-third episode of the fifth season of My Little Pony Friendship is Magic and the one hundred and fourteenth episode overall. The title and plot are a parody of the real-life feud between the Hatfield family and the McCoy family.

In this episode, Princess Twilight and Fluttershy are called by the map to settle a feud between two families who can't remember why they're fighting against each other.

For his role as Big Daddy McColt, Peter Kelamis was nominated for a 2016 UBCP/ACTRA award for Best Voice.[2]

The scene when Fluttershy stands up for the animals against the Hooffields and McColts reappears in Memnagerie.

The scene when Twilight and Fluttershy get summoned by the map reappears in Memories and More.

The next friendship mission

At her cottage, Fluttershy gathers her animal friends together for their "furry friends book club". Before they can start, Fluttershy's cutie mark suddenly starts glowing, indicating that she is being summoned by the Cutie Map. She bolts out the cottage door, leaving her animals to carry on without her.

As soon as Fluttershy reaches the Castle of Friendship, Twilight Sparkle excitedly greets her, having been summoned by the map as well and doing extensive research on their destination. Twilight and Fluttershy are being called to the Smokey Mountains, a region of Equestria that's supposedly home to a picturesque valley between two adjacent mountains. With their saddlebags—which Twilight has apparently crammed with books—the two set out in the Twinkling Balloon.

When Twilight and Fluttershy finally arrive to the Smokey Mountains, they find that most of the trees have been cut down, and ponies on one mountain are firing upon the ponies on the other mountain with pumpkins.

Twilight and Fluttershy meet with the first clan of ponies—the rural Hooffields, led by Ma Hooffield—who are in a long-standing feud with the neighboring McColts. Before their feud endangers innocent animals, Twilight gets the Hooffields to agree to a ceasefire, and she and Fluttershy go to talk with the McColts.

On the other mountaintop, where a large wooden fortress has been built, Twilight and Fluttershy meet with the architectural McColts—led by Big Daddy McColt—and try to foster a truce between the two sides. However, both sides are vehemently against a truce, and the Hooffields start firing tomatoes at the McColts.

"So much for potential friendship solution number twenty-eight."
— Twilight Sparkle

Fight to win, win to fight

Twilight and Fluttershy return to the Hooffields' farm just as the McColts start to return fire with bales of hay, putting the nearby animals in more danger. The two go back and forth between the opposing clans to find out how their feud first started, but neither side gives a clear answer. All the Hooffields and McColts care about is winning the fight, regardless of what they're fighting for.

Fluttershy thinks that one side simply needs to apologize to the other. To this end, the Hooffields deliver a large carrot cake to the McColts as a sign of goodwill. The McColts are almost ready to accept the Hooffields' apology, but a group of Hooffields suddenly emerge from inside the cake and assault the McColts with fruit. The feud continues to escalate, and the two sides bring their conflict to the valley between their mountain homes.

Using a long-range freeze spell, Twilight gets the two sides to stop fighting long enough for Fluttershy to explain. She tells the two warring clans of their ancestors Grub Hooffield and Piles McColt, who were best of friends. When they discovered the beautiful Smokey Mountain valley, they vowed to protect and preserve it for the animals that lived there.

Unfortunately, they disagreed on the best way to do that. Grub wanted to start by planting crops, but Piles wanted to start by building a shelter. Piles started building his shelter on the land where Grub was going to start his farm. As a result, the two continually argued and sabotaged each other's efforts. The Hooffields and McColts eventually settled onto opposing mountaintops, and the valley and animals between them suffered due to their constant fighting.

When the regretful Hooffields and McColts finally realize what their feud has done to the land around them, they put aside their differences and apologize—both to the animals and to the ponies they were fighting against.

The Hooffields and McColts work together to restore the valley to its former glory, culminating in a large water fountain dedicated to their ancestral founders. Twilight and Fluttershy's cutie marks start to glow, meaning their friendship mission has been accomplished. As they set out for home, Twilight wonders what future missions await her and her friends.

Twilight Sparkle: Sorry I've been a little skiddly-bopty-boo. I just can't believe this is finally happening!

Big Daddy McColt: If you ain't fer us, yer agin us.

Big Daddy McColt: We have to travel a ways away to buy our food. Now, we'll be stuck eatin' the pumpkins the Hooffields launched at us. Pumpkin bread, pumpkin soup, pumpkin [mispronounced] quesadillas, pumpkin paella, pumpkin cheese, pumpkin pie, pumpkin frittatas... Actually, that all sounds pretty good. But it'll get old!

Fluttershy: Nothing says "let's be friends" like a cake that says, "Let's be friends!" [hushed] I wrote that in icing on the top.

Fluttershy: Um, if you could just not yell so much, or maybe stop saying words altogether.

Twilight Sparkle: [straining] Fluttershy! You have to tell them! [strains] It's a lot harder to freeze an army of ponies than just six of them!

Twilight Sparkle: So, what do you think will happen next? We've all been called by the map now.
Fluttershy: Oof! [straining] I'm sure we'll find out when we get home...
Twilight Sparkle: What if it summons all six of us to another place? Or another pony we weren't expecting? [gasps] What if it wants us to solve other kinds of problems, like quantum physics, or why the apple doesn't fall far from the tree? 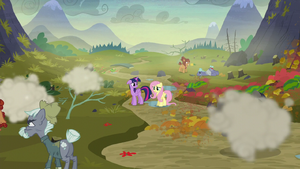