The Last Crusade is the twelfth episode of season nine of My Little Pony Friendship is Magic and the show's two hundred and eighth episode overall.[1] The title is a reference to the 1989 film Indiana Jones and the Last Crusade.

In this episode, unexpected visitors to Ponyville threaten to break up the Cutie Mark Crusaders forever.

This episode aired on May 21, 2019, on Cartoonito in Italy, twenty-five days ahead of its scheduled premiere on Discovery Family. It was scheduled to release on Ruutu's on demand service on June 14, 2019 but later was moved to July 19.[2]

The episode begins with Skeedaddle racing through Ponyville to find the Cutie Mark Crusaders. He finds them at Scootaloo's house and announces that he finally got his cutie mark in knot-tying. After thanking the Crusaders for their help in this achievement, he races off to tell more ponies, and Scootaloo's aunts Holiday and Lofty commend the fillies for helping yet another pony discover their special talent. Lofty in particular mentions that she needs help thinking of a theme for the quilt she is sewing.

As Holiday and Lofty leave to catch their train home, Apple Bloom mentions how cool it is that Scootaloo's aunts periodically watch over her while her parents are away. Just then, the mail delivery pony delivers a postcard on Scootaloo's doorstep, and Scootaloo is overjoyed upon reading it.

The return of Scootaloo's parents

Later that day, during Cheerilee's class at the Ponyville Schoolhouse, Scootaloo constantly looks out the door and window for her parents' impending arrival. When Cheerilee moves the lesson on to show-and-tell, Scootaloo excitedly tells her classmates about her parents, explaining that they are world travelers/adventurers who study exotic plants and creatures for the advancement of science and medicine.

As Snips doubts Scootaloo's fanciful tales about her parents, a cragadile suddenly bursts into the classroom and menaces Cheerilee and the students. An Earth pony stallion and Pegasus mare enter after the cragadile and wrangle it back into its cage, and Scootaloo introduces the two as her parents Snap Shutter and Mane Allgood. After an early class dismissal, Scootaloo and her parents have a warm reunion, and they and the other Crusaders celebrate this reunion over ice cream sundaes.

At a local dessert shoppe, Scootaloo catches Snap and Mane up on everything she and her friends have accomplished lately, including becoming friendship tutors at Twilight Sparkle's School of Friendship. Snap and Mane announce that they have taken on a new job assignment that would allow them and Scootaloo to live together, having decided upon this after the recent return of King Sombra and the destruction of the Tree of Harmony. Scootaloo is ecstatic by this announcement until Snap and Mane reveal that their new home is in the distant land of Shire Lanka, with only limited travel to and from Ponyville. The Crusaders are horrified to realize this means the potential and permanent breakup of their group.

At the Crusaders' clubhouse, the fillies despair over Scootaloo moving away until Rainbow Dash enters offering tickets to a Wonderbolts show. When the Crusaders inform Rainbow about what is going on, she encourages them to come up with a solution like they always do. Reasoning that Scootaloo's parents are only relocating to Shire Lanka because of the rare and dangerous creatures they might discover, the Crusaders come up with the idea of making up such a creature that would get Scootaloo's parents to stay in Ponyville.

For their next idea, the Crusaders use photographs of their matching cutie marks to try and convince Snap Shutter that they are an inseparable trio, united forever by the same cutie mark. Snap argues, however, that their cutie marks have certain distinguishing attributes and are not exactly the same. The Crusaders' next idea involves using a magic potion to bind each of their hooves together so they cannot be physically separated, but they quickly reconsider this idea.

With one day left before Scootaloo and her parents move away, the Crusaders make a last-ditch attempt to get Scootaloo's parents to stay in Ponyville: chaining themselves to the "For Sale" sign outside Scootaloo's house. Unfortunately, this also proves to be in vain, and the house ultimately ends up being sold. Snap and Mane express their sympathies to Scootaloo over the difficulty of facing such a big change and allow her to spend her last night in Ponyville with Apple Bloom and Sweetie Belle so they can say goodbye. However, Scootaloo angrily and sorrowfully says she does not want to say goodbye, criticizing her parents for changing her whole life so suddenly without taking her feelings into account, and she runs off in tears.

At the Ponyville train station, Apple Bloom and Sweetie Belle find Scootaloo, who has decided to stay with her aunts so that her parents will be forced to go to Shire Lanka without her. Apple Bloom and Sweetie Belle accompany her to Holiday and Lofty's house a few train stops away from Ponyville, where Lofty unveils her Cutie Mark Crusader-themed quilt, having been inspired by the Crusaders' stories about all the ponies they have helped.

The Crusaders explain to Holiday and Lofty the situation with Scootaloo's parents. When Scootaloo mentions that her parents' jobs are too important for them to stay in Ponyville, Apple Bloom realizes that the Crusaders themselves also have the important and unique job of helping other ponies find their true purpose, which they cannot do if they are separated, and they decide to try and convince Scootaloo's parents of this.

The next day, Scootaloo brings her parents to Ponyville Town Hall, where a large crowd of ponies have gathered for "Cutie Mark Crusader Appreciation Day". Among those assembled are all the ponies and creatures the Crusaders have helped or whose lives they impacted, including Babs Seed, Diamond Tiara, Trouble Shoes, Gabby, Zipporwhill, Tender Taps, Feather Bangs, Petunia Paleo, Chipcutter, Bluenote, Terramar, Big McIntosh, Sugar Belle, Bulk Biceps, Pipsqueak and the former blank flanks of their Cutie Mark Day Camp.

Mayor Mare gives a speech honoring the Cutie Mark Crusaders for everything they do for the ponies of Equestria and awards them a three-handled Key to the City. Others such as Skeedaddle, Rainbow Dash, Holiday, and Lofty also speak out on the Crusaders' behalf, explaining that they have a special purpose that only they can do.

As the train bound for Shire Lanka is moments away from departing, Snap Shutter and Mane Allgood are seemingly undeterred in their decision to make Scootaloo come with them. However, after hearing everything that has been said, they realize their mistake in trying to take Scootaloo away from her purpose in life and decide to let her stay in Ponyville, much to her joy.

Because of how much the Crusaders have improved the lives of the ponies in Ponyville, Holiday and Lofty decide to buy back the house and move to Ponyville so that Scootaloo can live with them permanently. Snap and Mane promise to visit Scootaloo from their new home in Shire Lanka, and Apple Bloom and Sweetie Belle are overjoyed that Scootaloo is not moving away.

Auntie Lofty: I could use that kind of help. Huh.
Scootaloo: [laughs] Come on, Auntie Lofty. You already have your cutie mark.
Auntie Lofty: Lot of good it does me. I can't decide what theme to give this quilt. Ah, I've run out of inspiration.
Apple Bloom: How about apples? Puppies? Kites!
Sweetie Belle: Or cotton candy! Or ballet!
Scootaloo: What about a Wonderbolt quilt?
Auntie Lofty: [laughs] See? Leave it to you three to come up with more ideas than I've had in a year! Now, that's talent.

Cheerilee: Why don't we hold off on the lesson until after lunch? How about show and tell? Does anypony have any—?
Scootaloo: My parents are coming home to Ponyville today!

Rainbow Dash: Guess who just got three front-row tickets to the Wonderbolts show next week!
Cutie Mark Crusaders: [whine, bawling]
Rainbow Dash: Uh, that is not the reaction I was expecting.

Sweetie Belle: We're the only three ponies in Equestria with the same cutie mark.
Apple Bloom: The chances of that are so rare. It means we belong together forever.
Snap Shutter: Yeah, but you don't have the same cutie mark.
Apple Bloom: [short laugh] Sure we do. Look!
Snap Shutter: Well, this part is the same. But the picture inside each of these is different. I think it means you'll stay best friends no matter where you go, and that's really special.
Scootaloo: But... we... [sighs] How do you argue with that?

Mayor Mare: These three ponies share a rare ability to help others find their true purpose. It's a job only they can do, and only together.
Mane Allgood: That sounds familiar.
Mayor Mare: In honor of all they have done and continue to do for the ponies of this town, I would like to present the Cutie Mark Crusaders with a three-handled Key to the City!

Snap Shutter: Well, I'll be a three-tailed bandicoot. I had no idea how important Scoot's club was.
Rainbow Dash: Oh, it's way more than just a club. The CMCs have made a difference for everypony here.
Terramar: And not just ponies. They help everycreature.
Aunt Holiday: Whether it's encouraging others to discover their special talent...
[hooves tapping]
Auntie Lofty: ...or inspiring them to do what's in their heart...
Aunt Holiday: ...these three offer the town something no other pony can. 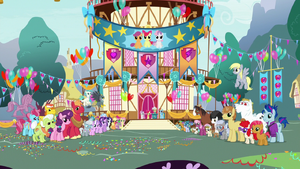