For the song, see The Last Laugh (song).

The Last Laugh, incorrectly[1] titled as That's a Laugh by some sources, is the fourteenth episode of season nine of My Little Pony Friendship is Magic and the show's two hundred and tenth episode overall.[2]

When Pinkie Pie seeks help from her old friend Cheese Sandwich in finding her life's purpose, she discovers the unimaginable has happened.

This episode was released on Youku's on-demand service in China[3] on June 28, 2019, thirty-six days ahead of its scheduled premiere on Discovery Family.

The scene with Pinkie explaining her adventure to Cheese Sandwich's factory reappears in Cakes for the Memories.

Pinkie and the Amusement Factory

At the Castle of Friendship, Pinkie Pie gathers her friends together to announce that she has been invited to Cheese Sandwich's newly opened "Amusement Factory", where his desire to spread joy and laughter to ponies is mass-produced. In addition to looking forward to seeing Cheese again, Pinkie also hopes he can help her discover her life's purpose. With the rest of her friends finding their own calling and realizing their own dreams, Pinkie Pie feels unfulfilled and sees Cheese's invitation as an opportunity to figure out her true purpose in life.

At Cheese Sandwich's Amusement Factory, Pinkie is stopped at the gates by two security guards, but they grant her entry upon realizing Cheese personally invited her. She is greeted at the entrance by what appears to be Cheese at first but turns out to be his straight-faced vice-president Sans Smirk in a mask. Sans welcomes Pinkie into the factory, where the employees work in boring assembly lines and take a serious approach to the "science of comedy".

Pinkie provides suggestions for improving the factory's gag products, and Sans is impressed by her innovative comedic insight. When Sans brings Pinkie to Cheese's office, she finds him sitting in the dark and speaking with an overly serious tone of voice. Cheese reveals that the true reason he invited Pinkie to his factory is because he has lost his ability to laugh and needs her help getting it back.

Cheese says to Pinkie that he can still tell if a joke or gag is funny or not, but he is unable to laugh at them, resulting in a creative block that prevents him from coming up with new ones. He explains that his travels across Equestria as a party pony had been very profitable, but his work eventually became more than he could handle. Sans Smirk appeared before him with the idea of opening a factory to keep up with the rising demand. But even with the factory's great success, Cheese inexplicably lost his laugh some time later, and he has stayed inside the factory ever since out of shame.

Realizing Cheese's crisis, Pinkie vows to help him get his laugh back. With Sans Smirk's assistance and the factory's entire inventory, she tries to get Cheese to laugh with various gags, props, and comedy styles, including googly-eye glasses, shock buzzers, and pie-in-the-face pratfalls. Unfortunately, all of her efforts result in failure. Still incapable of laughing, Cheese thanks Pinkie for trying so hard and resigns himself of a life devoid of laughter.

"If you can't make me laugh, no one can."
— Cheese Sandwich

How Cheese got his goof back

With Cheese Sandwich unable to laugh or come up with any new jokes or gags, Sans Smirk is unsure how long he and the other factory workers can recycle Cheese's old ones before the factory goes out of business. Sans offers to let Pinkie Pie take over the factory in Cheese's place, but Pinkie does not believe that is her life's purpose, wanting to make ponies happy in real-time. When Sans mentions how happy Cheese was to see the joy his gags brought to ponies' faces in the factory's early days, Pinkie comes up with an idea.

"We don't need to make Cheese laugh! He needs to make us laugh!"
— Pinkie Pie

Pinkie Pie races to Cheese's office and reveals to him the reason for his loss of laughter. Even though his factory brings joy to ponies around Equestria, he cannot be satisfied unless he witnesses that joy face-to-face, which he cannot do from behind the factory walls. Pinkie tests her theory by having Cheese tell a joke to Sans Smirk. Though Sans does not laugh, Cheese's humor and unintentional spoonerisms cause some of the factory workers to.

Through the titular song The Last Laugh, Cheese rediscovers the joy of bringing laughter to ponies directly instead of through a factory. Near the end of the song, he even manages to get the perpetually poker-faced Sans Smirk to laugh. Deciding to be a traveling party pony again, Cheese steps down as factory president and appoints Sans Smirk as his replacement, saying he will send whatever new gag ideas he comes up with to the factory during his travels. With his own life's purpose reaffirmed, Cheese invites Pinkie to accompany him so they can figure out hers, but Pinkie declines.

Pinkie Pie returns to Ponyville and tells her friends about her experiences at Cheese Sandwich's factory. When asked if she figured out what her life's purpose is, Pinkie explains that, like Cheese, bringing joy and laughter to others already gives her life purpose and fulfillment.

Rainbow Dash: I thought Pinkie Pie said to get here right away.
Applejack: She sure had a burr in her britches about somethin'.
Spike: So where is she?
Pinkie Pie: [scoffs] Yeah. What is taking her so long? [giggles] Just kidding. You guys really need to look behind you once in a while.

Spike: Uh, Pinkie? Are you sure this is edible?
Pinkie Pie: I am not! [chomps]

Guard Pony 2: Next time, I get to push the button.

Pinkie Pie: You lost your laugh? Is that some kind of joke? Because it's not a funny one.
Cheese Sandwich: It's not a joke. And even if it was, I... I wouldn't be able to laugh at it.

Pinkie Pie: I... guess that makes sense. "Rule of threes". Hmmm. One, two, three. Yup. That math checks out.

Pinkie Pie: [gasps]
Sans Smirk: I, too, am horrified.

Cheese Sandwich: Pinkie, you laugh at everything. I appreciate what you're doing, but I think it's a "cost lause". [stutters] A lost cause.
Factory Pony: [snickers]
Cheese Sandwich: What... was... that?!

Sans Smirk: Sir, are you sure this is what you want to do?
Cheese Sandwich: Of course. It's my life's purpose!
Pinkie Pie: Hey! That's what I came here looking for!
Cheese Sandwich: You did? Well, come on! Let's figure it out!
[factory ponies laughing]
Pinkie Pie: Actually, I think I'm good.

Pinkie Pie: ...And then I said goodbye, and then I came here! Oh! And then I gathered you all together and started telling you about it. First, I said—
Twilight Sparkle: Well, that sounds like quite a trip! 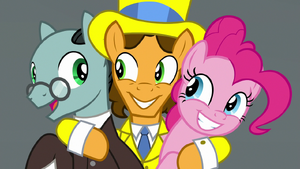