In this epilogue episode, an older and wiser Princess Twilight Sparkle is visited by a student with a friendship problem. As she attempts to solve it, she looks back on the times she and her friends spent together.

Four sequel events to the episode-"The Crowning Achievement", "Cutie Mark Deuxsaders", "She's All Yak" (also based on the episode of the same name), and "Prank to the Future" were included in Gameloft's mobile game.

This episode was originally scheduled to air on September 24, 2019 on Polish channel MiniMini+, but was replaced with a rerun of an earlier episode. However, it was still released the following day on the nc+ GO on-demand service.

The original United States airing of this episode added a "Many moons later..." title card and removed the theme song.

When asked if Applejack and Rainbow Dash, or if Fluttershy and Discord were romantically involved, Jim Miller replied "It’s up to the individual viewer to decide what those two are to each other"[2] and "Open to interpretation."[3]

The world of tomorrow

The episode begins many years after Twilight Sparkle has ascended the throne of Equestria. The Canterlot of the future is inhabited not only by ponies but also dragons, changelings, griffons, yaks, Hippogriffs, and various other creatures living together in harmony. A much older and more physically developed Spike enters the castle and greets Princess Twilight, who now has a tall stature and flowing mane like Princess Celestia. She explains to Spike that, having inherited management of the School for Gifted Unicorns, her top student has failed to learn the most important lesson of all.

Magic student Luster Dawn enters and tells Twilight that, even though she is very diligent in her magic studies, she is put off by the curriculum's focus on making friends, and sees friendship as a distraction and a waste of time. Even Twilight herself appears to rule Equestria alone, despite all she has accomplished with her friends. Reminded of how she used to be many years earlier, Twilight explains to Luster that friendships can be complicated and messy, and she tells of a time when she also thought it would not last forever.

So hard to say goodbye

The episode flashes back to the day of Twilight's coronation, soon after the defeat of Queen Chrysalis, Lord Tirek, and Cozy Glow. Twilight and Spike are packing up to move back to Canterlot; even though she is ready to rule Equestria, Twilight is reluctant to leave Ponyville behind, fearing that she and her friends will drift apart in spite of their promise to rule together. Spike suggests that Twilight talk to her friends about it.

However, the rest of Twilight's friends are more welcoming of this transition, explaining that change is natural and should be embraced. Applejack and Pinkie Pie are making final preparations for the ceremony; Fluttershy is rehearsing with her animal friends; Rainbow Dash is overseeing a special Wonderbolts routine; and Rarity is using star spiders to weave Twilight's coronation gown. Back at the castle, Twilight feels her friends care more about making her coronation perfect than the fact that she is leaving Ponyville.

When Twilight's friends arrive to see her off, Twilight fully voices her frustrations. Her friends reveal that they do share her concerns and have been keeping themselves busy with the coronation so that they do not worry her or make themselves sad. Finally coming to grips with Twilight leaving, the ponies cry together and express how much they are going to miss her. Twilight feels a little better knowing her friends feel the same way she does.

When Twilight misses her train to Canterlot, she teleports the seven of them onto it so they can travel together. Unfortunately, their coronation preparations quickly start to come undone: Big McIntosh mixes up food deliveries to Canterlot Castle; Fluttershy forgets to bring snacks for her performing animal friends; the Wonderbolts leave from Wonderbolt Academy without Rainbow Dash; Pinkie neglects to supervise Gummy and the fireworks display; and the train gets delayed due to a herd of sheep on the tracks.

Twilight finally makes it to the castle in time for the ceremony to begin, and Princess Celestia and Princess Luna officially introduce her as the new ruler of Equestria. However, the ceremony hits a number of snags: Twilight briefly trips on her gown; Fluttershy's animal friends fight with Rarity's star spiders; the fireworks disrupt the Wonderbolts' aerial routine; and the coronation guests are served applesauce instead of apple cider.

The Council of Friendship

Luster Dawn believes the disastrous coronation led to Twilight and her friends drifting apart, but she is immediately proven wrong when the rest of the Mane Six enter. In the time since the coronation, the ponies have grown up, some of them getting married and starting families, but they still get together once every moon to keep in touch and rule Equestria together as the "Council of Friendship".

The story flashes back to just after the coronation ceremony ends. Despite how disastrous it was, the ponies share a laugh about it. Starlight Glimmer and Spike arrive with a going-away present for Twilight: a book of memories for whenever she misses her friends or Ponyville. Wanting to maintain relationships with her friends for years to come, Twilight establishes the Council of Friendship. With Twilight's transition to ruler of Equestria now complete, Celestia and Luna take their leave to enjoy their retirement in Silver Shoals.

Twilight finishes telling her story to Luster Dawn, explaining that friendships can be hard and take work to maintain, but life is even harder without them. Luster takes Twilight's lesson to heart and realizes that friendship is not a waste of time like she originally thought, but she is unsure where to start making friends. Just like Celestia did for Twilight years before, Twilight sends Luster Dawn to Ponyville.

In this future Ponyville, the Mane Six sing The Magic of Friendship Grows, and Luster Dawn immediately starts making friends with the ponies in town. Various characters introduced throughout the series are shown to have grown up with new careers, new or bigger families, and new and fulfilling lives. Toward the end of the song, Twilight and her friends see Luster off as she goes to hang out with the friends she has made, and the storybook that opened in the series' first episode finally closes.

Future Twilight Sparkle: Ever since I took over Celestia's school, my focus has been on teaching magic. But now it seems my top student has missed the most important lesson of all.

Future Twilight Sparkle: Friendships take work, and there's no guarantee they'll last. They can be complicated. They can be messy. And they never go the way you plan. Friendship is a hard thing to navigate. I remember the first time I realized it might not last forever.

Twilight Sparkle: So, you're not worried about how things might change with me living in Canterlot?
Applejack: Of course not. Change is natural, like the seasons. That's just life on the farm.

Twilight Sparkle: Before I moved to Ponyville, I didn't really know what friendship was. You've all taught me so much. I can't believe it all might be ending. But when I imagine the future, all I can think about is that we won't be together! I'm literally moving away from you, and it's terrifying!

Princess Celestia: My sister and I have ruled this land for quite some time, but even we know that change eventually comes to us all. And though we know it can be unsettling, it's as natural as the rising and setting of the sun and the moon. Both of which my sister and I feel confident leaving in the hooves of the pony who will come after us.

Luster Dawn: Okay, I get it now. Your coronation was such a disaster that you and your friends never really recovered, and that's why you all drifted apart.
Future Spike: Well, you're half right.

Future Rainbow Dash: Maybe we could get to places on time if you let me do some of the chores instead of always doing everything yourself.
Future Applejack: Maybe I would if you did them the right way. Oh. Sorry. We're not the last ones, are we?

Future Fluttershy: Discord's headed to an O&O convention or he'd be joining us.

Princess Celestia: We know Equestria is in the perfect hooves with you and your friends looking out for it. And while we'll always be here if you need us, it's time for us to be on our way.

Future Twilight Sparkle: Sometimes friendships can be hard, and it takes work to maintain them. But without friends, things can be a lot harder.
Luster Dawn: I never thought about friendship being something to work at, and I don't mind work. I guess if they don't have to fade away, maybe making friends isn't the waste of time I thought. But I've been so focused on my studies, I wouldn't know where to start.
Future Twilight Sparkle: That's all right, because I know exactly where to send you. 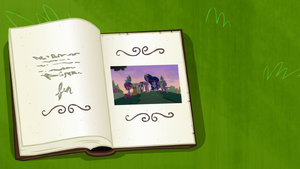