The Last Roundup is the fourteenth episode of the second season of My Little Pony Friendship is Magic and the fortieth episode overall. After Applejack sends a note to her family and friends that says she will not return to Ponyville after competing in the Equestria Rodeo Competition in Canterlot, her friends decide to find her and understand her motives.

The episode is included in The Friendship Express DVD, and its title was revealed a month prior to airdate.[3] Many Flash assets from Over a Barrel are reused, including the four train pulling ponies, who pull the coach Applejack commandeers.

On November 8, 2015, episode writer Amy Keating Rogers posted a scene from the first draft of the script on Twitter that was cut from the final episode. The scene involves Applejack reluctantly accepting a saddle from Rarity before she leaves for the Canterlot Rodeo.[4]

Shortly after airing, some viewers complained that Derpy's portrayal was offensive to mentally disabled persons and contradicted the show's lessons about friendship. Amy Keating Rogers responded with a statement which was republished on Equestria Daily.[5] According to Rogers, Derpy's scene was originally longer and included a flashback that showed how town hall was damaged; when Derpy was removing lightning from thunderclouds, she "bucked bolts" too close to the building. Rogers intended this clumsy pony to be called Ditzy Doo as a reference to the episode Winter Wrap Up, but was asked to name her Derpy as a "tip of the hat" to the fans.[5]

The episode was removed from rotation and iTunes due to complaints about Derpy's portrayal, and was later put back up, after Derpy's voice and eyes had been changed, and the mention of her name removed. The original version of the episode is retained in The Friendship Express DVD, but reruns on The Hub and the one on the Season 2 box set are the altered version. Treehouse TV in Canada also airs the altered version. The streaming company Netflix has the edited version, although subtitles on the system retain the original dialogue and, therefore, the use of "Derpy". Discovery Kids Latin America only airs the edited version; dub director Maggie Vera only dubbed the edited version; ​[​citation needed​]​ and most other dubs also only air the edited version.

The uncensored audio is, rarely, available with censored video via the English audio tracks on some foreign channels.​[​citation needed​]​

Practicing for the rodeo

Apple Bloom watches her sister, Applejack, jump over hurdles and shot put a bale of hay in a practice obstacle course. Apple Bloom is confident that her sister will win the Equestria Rodeo Competition. When Applejack responds modestly, Apple Bloom says that she is the ten-time rodeo champion of Ponyville and holds more blue ribbons than any pony in town. The filly says that she can't wait for her sister "to win every blue ribbon in Equestria and bring home the title of Equestria Rodeo champion!”

The send-off to Canterlot

"I just don't know what went wrong."
— Derpy in her first speaking role

Outside Ponyville’s town hall, Derpy tries to help Rainbow Dash set up a banner but ends up wrecking a part of the building. At a send-off outside town hall, Mayor Mare announces Applejack's participation in the Equestria Rodeo competition in Canterlot and thanks Applejack for generously offering up her prize money to fix town hall. In turn, Applejack thanks the citizens for supporting her in every rodeo ever since she was little. She promises to make Ponyville proud and the crowd cheers. The scene cuts to the Apple family and friends saying goodbye to Applejack on the train platform.

A week later, Applejack’s friends and family are waiting for Applejack to come home to a surprise party in the Sweet Apple Acres barn. However, a mailpony shows up to deliver a letter from Applejack. Amazed, the mailpony asks, "How did you know it was my birthday?" In the letter, Applejack says that she will send the prize money but will not be returning to Ponyville. Saddened by the news, Twilight Sparkle, Rainbow Dash, Pinkie Pie, Fluttershy, and Rarity assure the Apple family that they will go to the rodeo to ask Applejack why she won't be coming back. The friends also tell a crying Big McIntosh that they will search all of Equestria for Applejack if they must.

"I saw her compete at the Equestria Rodeo. Never saw anypony win so many ribbons in all my life."
— Cherry Jubilee

The five friends go to the rodeo and show a picture of Applejack to the ponies there but to no avail. Luckily, a mare points them in the right direction. The friends take a train to a town called Dodge Junction. After they disembark, Pinkie Pie inadvertently finds Applejack in a nearby restroom. Applejack explains that she has been working at a cherry farm run by a pony called Cherry Jubilee. Cherry Jubilee shows up and recounts how Applejack was looking for "a change of scenery.” Applejack asks her friends to go home without her and tell her family that she's doing fine. The friends believe that Applejack is not telling the whole truth.

In the factory, Applejack uses a treadmill to power a conveyor belt transporting yellow and red cherries. Applejack frowns when her friends are hired to be red/yellow cherry sorters. Twilight takes the opportunity to ask Applejack what she thought of Canterlot and the rodeo. Rainbow Dash joins in, asking if she saw Wild Bull Hickok and Calamity Mane. Rarity also leaves her post and inquires how Applejack met Miss Jubilee. Applejack curtly responds that she befriended Miss Jubilee at her cherry stand at the rodeo.

Applejack becomes irritated by her friends’ incessant questions and moves the conveyor belt too fast for Fluttershy and Pinkie Pie. In an attempt to handle the onslaught of cherries, Pinkie Pie stuffs their saddlebags and then her own mouth with cherries. Fluttershy cries "STOP!" and Applejack skids to a halt. The cherries fly off the conveyor belt and cover Applejack with cherry juice.

The five friends are then seen mopping up the juice on the floor and walls. Calling for drastic measures, Rainbow Dash says it's time to "call in the big guns," and the camera dramatically zooms in on Pinkie Pie.

Calling in the "big guns"

"It's time to call in the big guns."
— Rainbow Dash

When Applejack is bucking cherry trees, Pinkie Pie asks her if she needs some help, promising to not ask any questions. Pinkie Pie starts babbling about cherry-based dishes and fun things to say, such as "chimicherry," "cherrychanga," "kumquat," and "pickle barrel." Overwhelmed, Applejack begs her to stop. Rainbow Dash, who is wearing earplugs, tells Applejack that the only way she can stop the madness is to spill the beans. Applejack finally agrees to tell the truth tomorrow at breakfast, and when Pinkie doubts her, she gives a Pinkie promise.

"Giddy up, fellas, I gotta get the heck out of Dodge!"
— Applejack

The next morning, the five go to Applejack's bedroom, but nobody is there. Pinkie Pie is enraged because Applejack broke her Pinkie promise. Meanwhile, Applejack is waiting at the Dodge Junction train station with her luggage. When she sees her friends running towards her, she jumps on a coach and orders the four ponies pulling the coach to run away. The friends start chasing Applejack in a cart pulled by Rainbow Dash and Fluttershy. Just as they are approaching Applejack, Fluttershy suddenly comes to a halt to avoid hitting a rabbit. When they catch up to Applejack again, Pinkie Pie leaps into her coach to ask why she broke her Pinkie promise, but Applejack insists that she didn’t break the promise because she did not go to breakfast. Pinkie Pie accepts her excuse and jumps backwards into the wooden cart, saying, "Rarity, catch me." Taken aback, Rarity is knocked off the cart, and both of them tumble off. Twilight tells the Pegasi to go back, but Rainbow Dash refuses. The ponies see a train hurtling down a railroad track stretching across their path. The coach ponies doubtfully look at Applejack, but she whips them, and their coach crosses the track, narrowly avoiding the oncoming train. Applejack jumps off and says, "Yee-haw!", but the coach ponies say, "Lady, you're trouble," before driving away.

Fluttershy and Rainbow Dash fly over the train, and Rainbow Dash tackles Applejack upon landing. A bunch of medals spill out of Applejack's bag and Twilight compliments Applejack, but she despairs because she didn’t win a single blue ribbon nor any prize money. She explains that she tried to earn money on the cherry farm so she could send home the money she promised. Twilight contradicts Applejack's belief that she is a failure and Rainbow Dash says that as friends, they wouldn't care even if she came in fiftieth place. Fluttershy chips in, saying that the hole in town hall can always be repaired but not the hole in their hearts if Applejack never comes back. Rainbow Dash quietly cries and says, "Darn it! Now you got me acting all sappy!"

"Applejack, we can always find a way to fix that hole in the roof. But if you don't come back, we'll never be able to fix the hole in our hearts."
— Fluttershy

Applejack learns that there is no reason to hide when you don’t do as well as you had hoped. Instead of running away from your problems, you should turn to your friends and family.

When Applejack comes off the train in Ponyville, her family and Winona hug her. The episode ends when Rarity and Pinkie Pie, who were left behind during the chase, use a hoof-powered railroad cart to travel home. Pinkie Pie still compares the words "chimicherry" and "cherrychanga," and Rarity mutters that Rainbow Dash will get it when they return.

Rainbow Dash: Huh? Now, careful, Derpy! Don't want to do any more damage than you've already done.
[crash]
Derpy: I just don't know what went wrong!
Rainbow Dash: Yeah. It's a mystery.
Derpy: Nice work, Rainbow Dash!
[thud]
[wood splintering]
Rainbow Dash: [yelps]
Derpy: You okay, Rainbow Dash? Anything I can do to help?
Rainbow Dash: No! Nothing! In the name of Celestia, just sit there and do nothing.
[Derpy sits down, floor cracks, Derpy and Dash crash through it]
Derpy: Oops. My bad.

Pinkie Pie: And drink sarsaparilla! What? It gives you extra sass.

Fluttershy: Oh, I hope Applejack is surprised by this surprise party!
Rainbow Dash: Well, that is the point.
Fluttershy: I know, but I hope she isn't so surprised she's startled, because while being surprised can be nice, being startled can be... very startling.
Pinkie Pie: Surprise!
Fluttershy: [gasps] Oh, Pinkie, you startled me.

Rainbow Dash: Darnit! Now you got me actin' all sappy! 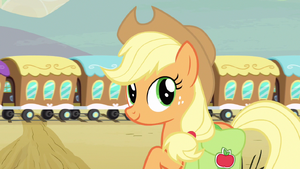