The Maud Couple is the third episode of season eight of My Little Pony Friendship is Magic and the one hundred and seventy-second overall. The title is a reference to the Neil Simon play The Odd Couple, as well as its subsequent film and television adaptations.

In this episode, Pinkie Pie's super-best-friend-sister bond with Maud is challenged when Maud gets a boyfriend that Pinkie can't stand.

The episode begins at a comedy club in Ponyville, where Maud Pie gives a stand-up routine. Her jokes get little response from the audience, but Pinkie Pie laughs at everything she says.

"Isn't my sister Maud the most hilarious, entertaining, amazing comedian ever?"
— Pinkie Pie

After the club, Pinkie wants to celebrate Maud's "successful" comedy routine, but Maud says she has other plans later that evening. Pinkie Pie is disappointed that Maud has had other plans for the past several days and they haven't spent much time together lately. Before Maud can explain the reason for this, Pinkie says they can still spend time together before Maud's upcoming birthday, and they make plans to hang out the following morning.

However, when Pinkie goes to meet Maud at her cavern home the next morning, Maud is strangely not there. She searches all over town for Maud, even in Yakyakistan and the Ghastly Gorge, but Maud is nowhere to be found. Pinkie checks in with Starlight Glimmer at the Castle of Friendship, but Maud is not there either. When she tells Starlight about her plans with Maud that morning, Starlight agrees to go looking for her while Pinkie goes to buy the cake for Maud's surprise birthday party.

At a bakery shop in Ponyville, Pinkie tries to buy some ingredients for Maud's birthday cake, but an Earth pony stallion in front of her takes a long time to finish his order. The stallion speaks with an odd, awkward tone and says "technically" very frequently, which annoys Pinkie. By the time he finishes his business with the bakery owner, the owner has gone on a lunch break, preventing Pinkie from making her own order.

As Pinkie expresses frustration over meeting such an annoying pony, she finally finds Maud. Maud apologizes for not being around to hang out with Pinkie that day and reveals she has been busy lately because she has a boyfriend. At first, Pinkie is very excited that her sister is in a relationship, but when Maud introduces Pinkie to her boyfriend, it is revealed to be the annoying stallion she met in the bakery, named Mudbriar. Maud explains that the two of them met during a rock show, and Mudbriar is as passionate about sticks as Maud is about rocks.

Though they have much in common and make each other smile, Pinkie still thinks Mudbriar's mannerisms and constantly pointing out technicalities are annoying and weird. She tells Starlight about Mudbriar later and thinks he and Maud are nothing alike, but Starlight says Maud must like him for a reason and that Pinkie just needs to get to know him better. She suggests that Pinkie and Mudbriar plan Maud's birthday party together while she keeps Maud busy, and Pinkie begrudgingly agrees.

Pinkie Pie brings Mudbriar to her party planning cave under Sugarcube Corner—which Mudbriar points out is technically a cavern instead of a cave. As Pinkie shares her plans for Maud's surprise party, Mudbriar claims that Maud doesn't like surprise parties or any of the activities Pinkie has planned. Pinkie takes offense to the notion that Mudbriar knows Maud better than she does and suggests asking her straight out.

On a hill where Starlight and Maud are flying kites, Pinkie and Mudbriar appear, and Pinkie asks Maud whether or not she likes surprise parties. Maud explains that, while she likes surprise parties because it makes Pinkie happy to throw them, she would prefer a smaller party with just Pinkie, Starlight, and Mudbriar. In disbelief over this revelation, Pinkie admits that Mudbriar is impossible to like and accuses Maud of choosing him over her.

Maud insists that she didn't choose either of them over the other and says Mudbriar makes her happy, even adopting some of his mannerisms. Realizing she is losing her best-sister-friend to someone she doesn't like, Pinkie leaves in tears.

On top of a bridge, Pinkie Pie tries to make sense of how Maud could like someone like Mudbriar, briefly entertaining the thought of it being "Opposite Day". In her increasing loss of sanity, she runs away to the Pie family rock farm. The next morning, Pinkie wakes up to do farm chores with her sisters Limestone Pie and Marble Pie. Unable to find a solution to her dilemma, she asks them why Maud would like Mudbriar and what he has that she doesn't.

Limestone and Marble lead Pinkie over to what appears to be an ordinary rock. When Marble cracks it open, it's revealed to be a geode with sparkling blue gems inside. Limestone explains that Pinkie may see Mudbriar as a rock, but Maud sees him as a beautiful gem. Even if Pinkie can't see past Mudbriar's dullness, all that matters is how happy he makes Maud. Pinkie thanks her sisters for their insight.

Back in Ponyville, Pinkie returns to help Mudbriar wrap a birthday present for Maud, and she extends an olive branch to him in truce and apology. Though Mudbriar points out that her gift is technically a quercus and not an olive branch, he accepts Pinkie's apology and friendship, and they team up again to plan Maud's party.

At the end of the episode, ponies gather outside Town Hall for Maud's birthday, but the pony of honor is just a cardboard cutout. Meanwhile, the real Maud has a smaller party on a nearby hill with Pinkie and Mudbriar like she wanted. Maud is pleased with this outcome, and Pinkie gives Mudbriar all the credit for the idea. Mudbriar continues to point out technicalities, much to Pinkie's frustration, but she bears with it and has a group hug with Maud and her boyfriend.

Mudbriar: [to S06E12 Unnamed Unicorn Mare #3] Goodbye.
Pinkie Pie: That's what you've been standing here all this time to say?
Mudbriar: I was deciding between "goodbye" and "see you later".
Pinkie Pie: Uh... but, they're the same thing.
Mudbriar: Technically, they're very different. "See you later" implies an event in the near future wherein we see each other. "Goodbye" expresses good wishes where parting or at the end of a conversation.
Pinkie Pie: Yyyyyeah, same thing.
Mudbriar: I will not apologize for speaking with precision.

Pinkie Pie: [crying] I don't understand! How could Maud like Mudbriar? Is it Opposite Day? Nothing makes sense!
Fluttershy's apparition: I'm not shy, and I hate animals!
Rarity's apparition: Fashion?! Not for me, darling!
Applejack's apparition: [spits] An apple a day is downright disgusting!
Rainbow Dash's apparition: Slow and steady wins the race!
Twilight Sparkle's apparition: I never learned to read!
Mane five's apparitions: [laughing]
Pinkie Pie: What if I don't like cupcakes?! [screams] 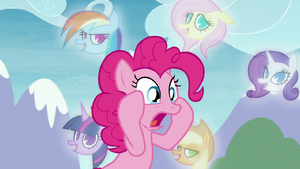