The Mean 6 is the thirteenth episode of season eight of My Little Pony Friendship is Magic and the one hundred and eighty-second overall. It marks season eight's midseason finale. The title is a play on "the Mane 6", the term used to collectively refer to the series' six pony main characters.

In this episode, Queen Chrysalis returns to exact her revenge on Starlight Glimmer and the Mane Six.

An animatic of the episode was screened at Hasbro's HASCON convention on September 9, 2017.[1] The convention's panel schedule misidentified the episode as "the Season 8 premiere".[2][3]

An episode clip was presented at the American International Toy Fair on February 17, 2018.[4]

The episode aired on Tiny Pop[5][6][7] three days before its scheduled premiere on Discovery Family.

According to episode writer Michael Vogel, "The outline for this episode was SO complicated that no one was sure which pony was where when and just told me to run with it because "We THINK it's PROBABLY gonna make sense when we see it."[8]

Also according to Vogel, "[This] episode was inspired by [Shakespeare's] Midsummer Night's Dream. Was gonna have Zecora or Spike open and close with some iambic pentameter but didn't have room."[9]

At the School of Friendship, Twilight Sparkle and her friends are awaiting the arrival of a photographer pony from the Canterlot Historical Society. When the photographer finally arrives, she apologizes for being late and takes each of the Mane Six's photographs—while also taking a strand of hair from each of their manes. When Pinkie Pie points out that the photographer didn't take Starlight Glimmer's photograph, she quickly and halfheartedly takes one and leaves.

When the photographer reaches the edge of the Everfree Forest, she puts on a wicked grin and drops her disguise, revealing herself to be Queen Chrysalis.

Chrysalis attaches each of the Mane Six's photos and strands of hair to a tree in the forest and carves their cutie marks into the tree trunks. Using their likenesses and DNA, she creates artificial copies that can wield the Elements of Harmony and serve under her so that she can build a new hive and rule as queen again. She also intends to torture and destroy Starlight Glimmer as revenge for taking her old hive away from her.

Meanwhile, Twilight and her friends are heading to a friendship camping retreat in the forest, having not had much time to hang out lately because of their classes. Applejack is particularly excited to have Starlight along for her first camping trip, and the campsite is near the Tree of Harmony.

Back in the forest's depths, Chrysalis attempts to command her artificially-made slaves, but they refuse to obey and behave like polar opposites to their real counterparts: Mean Pinkie is irritable, Mean Fluttershy is a bully, Mean Rarity is greedy, Mean Applejack is a compulsive liar, and Mean Rainbow Dash is faithless. Mean Twilight openly questions Chrysalis' tactics, asking why she didn't simply attack the Mane Six instead of taking their hairs. Chrysalis argues that she no longer has her changeling hive and needs the Elements of Harmony to stand a fighting chance.

The real and fake intertwine

As Twilight and her friends continue toward the campsite, Fluttershy goes off by herself to help a little bird that got separated from its sibling, and Pinkie Pie ventures on ahead of the others. Meanwhile, Chrysalis continues to deal with her artificial servants' overall disobedience as they search for the Elements of Harmony. When they also get separated, Mean Twilight suggests splitting up to cover more ground, which Chrysalis allows.

As Mean Twilight goes off by herself to search for Mean Fluttershy and Mean Rainbow, she starts to consider betraying Chrysalis so that she and the other copies can keep the power of the Elements for themselves. She runs into the real Pinkie Pie and learns from her the location of the Elements of Harmony. Elsewhere, Fluttershy returns the little bird to its nest and briefly encounters Mean Rainbow. As the rest of the Mane Six look for Fluttershy, they agree to split up the search and meet up later at the Tree of Harmony.

Mean Fluttershy terrorizes the animals of the forest, causing them to growl at the real Fluttershy when she comes by. Meanwhile, Applejack and Rainbow Dash run into Mean Rarity, who suddenly and greedily hoards all of Applejack's camping supplies for herself. When Mean Applejack encounters the real Rarity and Starlight Glimmer, she remembers that Chrysalis is seeking revenge against Starlight and decides to lead them back to the queen. Finally, Twilight briefly encounters Mean Pinkie and Mean Rainbow.

With the Mane Six and their artificial counterparts spread out across the forest, it leads to further confusion and mistaken identities as the real ponies get blamed for things that the fake ponies say and do. One such misunderstanding causes Twilight to get into a heated argument with Pinkie Pie. As Mean Twilight goes off on her own, she regroups with Queen Chrysalis and reveals she knows where the Elements of Harmony are.

The real and fake separate

When Mean Rarity believes Applejack and Rainbow Dash to be plotting to steal her belongings, she crazily runs off on her own. Meanwhile, Mean Applejack tells fake camping stories to Rarity and Starlight Glimmer, and she ends up hurting Starlight's feelings, causing Starlight to run off. As Rarity goes after Starlight, Chrysalis and the rest of the copies regroup with Mean Applejack. With her artificial minions gathered together again, Chrysalis heads toward the Tree of Harmony.

Rarity's chase after Starlight leads them to Twilight, Pinkie, and Fluttershy, and Applejack and Rainbow Dash appear as well. Because of their fake counterparts' actions, the seven ponies argue bitterly with each other. Twilight interrupts the arguing, admits to getting carried away with her planning, and says she'll understand if they want to forget about the retreat and return home. The others exchange apologies for all the misunderstandings and harsh words, and they decide to press on toward the campsite.

Chrysalis and the Mean 6 reach the campsite first, and the Mean 6 demolish it. Chrysalis, utterly exhausted by her minions' insubordination and antics, commands them to retrieve the Elements from the Tree of Harmony. Unbeknownst to Chrysalis, Mean Twilight and the others plan to turn against her once the Elements are in their possession.

At the base of the Tree of Harmony, Chrysalis discovers her creations' true motives and attacks them, all while the Elements react to the Mean 6's presence. Just before Mean Twilight overpowers Chrysalis, the Tree of Harmony grabs the Mean 6 with tendrils of light and liquefies their bodies, reducing them to the clumps of wood they were originally. With her plans ruined, Chrysalis once again swears vengeance on Starlight Glimmer.

When the real Mane Six and Starlight arrive to find the campsite in ruins, Twilight is discouraged at first, but they all share a laugh over what a complete disaster their friendship retreat was. As they fix up the campsite together, Queen Chrysalis flies off into the night sky.

"If we can survive a day like this, I think our friendship is strong enough to handle anything the world can throw at us."
— Twilight Sparkle

Starlight Glimmer: I'll help you set up your—
Photographer: Princess Twilight, thanks so much for this!

Mean Pinkie Pie: Hunting down some lame Elements? This is the worst day ever!
Mean Fluttershy: No. Now it's the worst day ever! [laughing cruelly]
Mean Rarity: Those Elements are mine! Along with this rock! Oh, and that twig!
Mean Applejack: I got all kinds o' Elements right here under my hat. I'll let you see 'em for five bits.
Mean Rainbow Dash: [scoffs] Losers.

Mean Twilight Sparkle: "Permission"? You need us way more than we need you, your Majesty! The others are fools. But with me to lead them, there's no reason we can't find the Elements and keep the power for ourselves!

Mean Fluttershy: I hope you all freeze this winter!

Mean Rarity: This is mine! And this as well! Oh, and this is absolutely mine!
Applejack: Rarity, what in the hay are you gonna do with a fishin' rod?
Mean Rarity: I don't know. But I wants it!

Pinkie Pie: You know what, Twilight? Maybe if you weren't so worried about schedules, you'd realize you're the one ruining the retreat for your friends!
Twilight Sparkle: [gasps] Well, if my friends don't care about the retreat I planned for them... maybe they should've stayed home!
Fluttershy: Can't we all just get along?! [crying]

Queen Chrysalis: Grub-sitting you six is nothing like controlling my hive! Give me one good reason why I shouldn't just destroy you all and start over!
Mean Twilight Sparkle: Because I know where the Elements of Harmony are. You need me.

Mean Applejack: ...So there I was. Just me and, uh, a bucket of honey. Yeah, yeah, that's the ticket. Uh, b-but I-I survived all by myself and this here forest for, uh, a hundred and... twenty-seven hours!

Twilight Sparkle: We know each other really well — the great stuff and how to get on each other's nerves, too. I wanted a fun trip with my friends. But instead, I got carried away with plans and ruined everything. If you want to forget it all and head home, I won't be offended. I just want us to stop fighting.
Applejack: [to Starlight Glimmer] Hey, sorry if I got carried away with all that campin' stuff.
Starlight Glimmer: I'm sorry, too. I should've just told you I'll never like camping. Also, I'll never like camping.
Rarity: Well, if we're all being honest, I can't survive with just this tiny yet fashionable little saddlebag! I miss my things!

Mean Twilight Sparkle: We need the Elements to take out Chrysalis! [gasps]
Queen Chrysalis: How dare you! I created you! 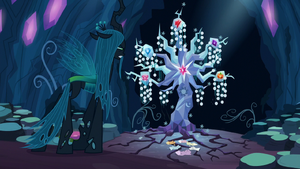