For the fictional character, see Mare Do Well.

The Mysterious Mare Do Well is the eighth episode of the second season of My Little Pony Friendship is Magic and the thirty-fourth episode overall. The episode involves Rainbow Dash's rise to hero status through various cliché superhero rescues. Later on, however, a mysterious mare called by the ponyfolk as Mare Do Well quickly takes her place as the new hero of Ponyville. The Verizon FiOS synopsis for this episode refers to Rainbow Dash using masculine pronouns. "Mare Do Well" is a play on the term "ne'er-do-well," a person who is completely lacking in merit.

Production and reuse of assets

In multiple shots, there are hats with Rainbow Dash's old concept cutie mark on the front. This is also seen over some ponies' cutie marks, in a sticker form, and on Rainbow Dash herself in one shot during the construction scene.

Of the six Earth pony construction workers saved by Mare Do Well, four use repurposed Pegasus designs from the episodes Sonic Rainboom and Feeling Pinkie Keen.

The episode begins with Scootaloo heading the Rainbow Dash fan club in the Cutie Mark Crusaders' treehouse. She declares that Rainbow Dash should be declared the most awesome pony in Ponyville. Snails and Snips join in the discussion with their opinion of the best way to describe Rainbow Dash. A voice suggests Rainbow Dash is super-ultra-extreme-awesomazing, which the club agrees is right. The voice is revealed to be Rainbow Dash listening to the club outside.

Rainbow Dash is then seen flying around and having "a dip in the clouds." Suddenly, she hears Aura shouting for help from a well. Rainbow Dash cuts short her cloud dip and saves the dirty filly from the well, and is met with large amounts of praise from other ponies, much to her surprise. Later, she sees a runaway baby carriage with a baby pony in it and quickly saves the baby from plunging off a cliff. Again, she receives a great amount of praise and is then seen being photographed by paparazzi. Realizing the fame that comes with her heroism, she goes on to save a collapsing porch holding elderly ponies and dances to the crowd's chants. She then gives a speech to the Rainbow Dash fan club in Sugarcube Corner. She brags about her new status as "hero" and the other main five are talking about her not being modest at all. Spike is in the corner writing Rainbow Dash's autobiography, which Twilight Sparkle reacts to by telling Rainbow Dash that an autobiography is written by who it's about. Rainbow Dash scoffs and says that she is too busy saving lives to write about her achievements, and has hired Spike as her ghost writer.

Who is the best hero?

"That's right! Ponyville has a new hero. A mysterious mare that has done well by our fair city today. I dub this new masked hero 'The Mysterious Mare Do Well'!"
— Mayor Mare

However, her pride soon begins to get in the way of her heroic deeds, and a mysterious mare in purple steps in. She begins to steal Rainbow Dash's thunder by saving a pony from a falling hot air balloon, stopping a bus full of ponies from falling off a cliff, saving construction workers from falling debris, and fixing the dam. She then becomes the new hero of Ponyville dubbed "the Mysterious Mare Do Well". Rainbow Dash attempts to outshine Mare Do Well but fails, and her hatred and jealousy towards Mare Do Well grows. Every time Rainbow Dash fails, Mare Do Well steps in to fix the problem. It appears that Mare Do Well has both wings and a horn, seems to know when things are going to happen, is super strong, super fast, and incredibly agile as well. Rainbow Dash realizes that she cannot compete with that. Even her friends seem to be impressed by Mare Do Well's heroics.

Rainbow decides that she has to convince the ponies in Ponyville that she is still heroic and awesome. However, when she finds that there isn't anyone who needs saving, she ends up doing menial tasks like opening a jar of peanut butter and mowing a lawn in hope that ponies may praise her, but instead the townsponies roll their eyes and shrug her off as lame, leaving her even unhappier than before.

Rainbow goes off to brood on a thundercloud, wondering why the folk doesn't like her anymore and why she's all alone. When she hears her name called by Scootaloo, Rainbow assumes she's apologizing for forgetting about her, but Scootaloo tells her she's just inviting her to a thank you parade for Mare Do Well. At first Rainbow refuses, saying she wants to be alone, but then she hatches a plan to unmask Mare Do Well and decides to go.

Unmasking the Mysterious Mare Do Well

At the parade, when Mare Do Well appears, Rainbow comes up onto the stage and tries to get her to take off her mask. Mare Do Well runs away, but Rainbow gives chase. Mare Do Well keeps appearing in different places, too fast for Rainbow Dash. After a bit of chasing, Rainbow pins her down and pulls off her mask to see none other than Pinkie Pie. Astonished, she begins stammering. Then two more Mare Do Wells appear and pull off their masks, revealing themselves to be Twilight Sparkle and Applejack. They explain that they wanted Rainbow Dash to stop boasting so much and come off her high horse. Applejack stopped the runaway bus with her powerful legs, Pinkie used her Pinkie Sense to avoid the falling obstacles at the building site, Twilight used her magic to fix the dam, Fluttershy did the flyby, and Rarity designed the costumes.

Rainbow Dash understands that she should act with grace and humility and not with selfish arrogance so as to avoid losing the appreciation of the townsponies as well as causing a rift of jealousy between herself and her friends. She also learns that, while it's okay to be proud of your accomplishments, you should never brag about them. The episode ends with her holding a quill to write a letter to Princess Celestia and giving the audience a wink.

The episode's lead storyboard artist, Sabrina Alberghetti, commented on how the crew incorporated "one [superhero] cliché after another" in a "fun tongue-in-cheek kind of way."[2] Among them:

Scootaloo: I motion that Rainbow Dash be declared the most awesome pony in Ponyville.
Snails: I second the motion, and might I add that if you looked up the word 'awesome' in the dictionary, there would be a picture of Rainbow Dash.
Rainbow Dash: What about super-ultra-extreme-awesomazing?

Rainbow Dash: Looks like my sky swim will have to wait!

Twilight Sparkle: Call me silly, but this whole hero thing might be going to Rainbow Dash's head.
Pinkie Pie: You may be right, silly.

Rainbow Dash: Hey Applejack, how'd you like to be immortalized as my friend?
Applejack: Immorta--what?

Twilight Sparkle: Are you taking notes?
Spike: Yup! I've been hoof-picked by Rainbow Dash herself, to write her autobiography!
Twilight Sparkle: Umm, autobiographies are supposed to be written by the pony they are about.
Rainbow Dash: Maybe for your normal, run-of-the-mill ponies. But I'm far too busy saving lives to stop and write. That's why I hired Spike as my ghost writer.
Pinkie Pie: Ahhh! Spike's a ghost!

Rainbow Dash: Never fear, your friendly neighborhood Rainbow -
Globe Trotter: Excuse me, do you think you could skip your catchphrase and just hurry up and save us?
Rainbow Dash: Ugh...fine.

Rainbow Dash: Oh, for the love of pete.

Rainbow Dash: Where is an out-of-control vehicle when you need one?!

Rainbow Dash: How would you describe what I just did? Would you say I was amazing?
Amethyst Star: Aren't you milking this a bit?

Applejack: I stopped the carriage bus with these babies. Bucky McGillicuddy and Kicks McGee.
Fluttershy: Ooh, ooh! And I did the flyby afterwards.
Rarity: I made the costumes. Fabulous if I do say so myself!

Twilight Sparkle: Celebrating your accomplishments is natural. But...
Applejack: ...Rubbin' them in everypony's face is not.
Pinkie Pie: Yeah, the only thing that should be rubbed in anypony's face is chocolate cake. 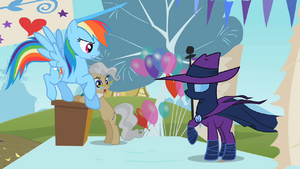