The One Where Pinkie Pie Knows

The One Where Pinkie Pie Knows is the nineteenth episode of the fifth season of My Little Pony Friendship is Magic and the one hundred and tenth episode overall. The episode title is modeled after the nondescript episode titles of the 1994 sitcom Friends.

In this episode, Pinkie Pie finds out Princess Cadance and Shining Armor are going to have a baby, but she finds it a difficult secret to keep from her friends.

The episode is written by G.M. Berrow, the author of the My Little Pony Friendship is Magic chapter books. Berrow first announced her involvement with the show at BronyCon 2014. At BronyCAN, it was revealed that it will be a Pinkie Pie-centered episode.[1] On November 5, 2014, Sabrina Alberghetti tweeted that she was storyboarding this episode.

The scene where Pinkie is tossing the files was done by animation director Rex Liwang.[2]

For her roles as Pinkie Pie and Fluttershy in this episode, Andrea Libman was nominated for a 2016 UBCP/ACTRA award for Best Voice.[3]

The scene with the Mane Six persuading Pinkie to tell them about Shining Armor and Cadance's secret surprise reappears in Cakes for the Memories.

The episode begins at Sugarcube Corner where Pinkie Pie is attempting to break her cupcake-icing record. Mrs. Cake enters with a scroll detailing a large order, and she tells Pinkie to watch the front counter while she checks the supply room. When Mrs. Cake drops the scroll, Pinkie reads it and discovers something tremendous:

"A baby?! Shining Armor and Princess Cadance are having a baby?!?"
— Pinkie Pie

Pinkie cannot wait to share this news with her friends, especially Twilight Sparkle, but Mrs. Cake tells her that it must be kept secret until Shining Armor and Princess Cadance arrive to Ponyville. A nervous Pinkie Pie wonders if she is capable of keeping such a secret.

On her way to the Castle of Friendship, Pinkie Pie is at grips with herself for having to keep Shining Armor and Cadance's surprise a secret from her friends, almost revealing it to Rarity.

With all the talk going on related to foals and surprises, Pinkie frantically leaves and retreats back to Sugarcube Corner. She decides to avoid socializing with anyone until Shining Armor and Cadance arrive the next day. Unfortunately, Mr. Cake enters and reminds Pinkie that she "Pinkie-promised" to make cake deliveries around town for him.

Cross my heart, hope to fly

As she makes her deliveries, Pinkie Pie briefly runs into Fluttershy, who asks her to bring snacks to the castle later for Shining Armor and Cadance's visit. Pinkie agrees and sets about making her deliveries as quickly as possible, all while avoiding her friends. She feels awful for ignoring and keeping secrets from them, but she would be unable to live with the guilt of ruining the surprise.

After finishing her deliveries, Pinkie believes she is done socializing with other ponies until the next day, but she finds a list of other Pinkie Promises she recently made that she has yet to carry out.

"I've been getting liberal with those Pinkie Promises lately..."
— Pinkie Pie

Over the course of the afternoon, Pinkie Pie makes balloon animals for the Ponyville Schoolhouse foals, helps Mayor Mare sort her file cabinets at Town Hall, and helps a store owner advertise his store. During each task, Pinkie is constantly surrounded by reminders of the secret she's keeping, making it all the more difficult to keep.

Pinkie Pie freaks out, unable to keep the secret much longer. Her friends sense her extreme discomfort and encourage her to speak her mind. Before Pinkie can do so, Shining Armor and Cadance arrive, having resolved their trip delays earlier than expected. Pinkie believes she doesn't have to keep their secret anymore, but Shining Armor asks her to keep it a little longer for a surprise that he and Cadance have planned.

The two send the Mane Six on a scavenger hunt around Ponyville, similar to ones that Shining Armor made for Twilight when they were little. The scavenger hunt leads them to the Foal Free Press at the schoolhouse, Applejack's birth certificate at town hall, and a baby crib at the furniture store.

The hunt leads the Mane Six back to Sugarcube Corner where Shining Armor and Princess Cadance are waiting. Twilight expects a prize for completing the hunt, and Cadance says that all the locations the hunt led them to had something in common:

Twilight puts two and two together, and Shining Armor and Cadance officially announce that they're having a baby! Twilight and Pinkie Pie are overjoyed—Twilight at the thought of becoming an aunt, and Pinkie Pie over not having to keep her secret anymore.

As the ponies celebrate with a party, Princess Cadance thanks Pinkie Pie for keeping their announcement a surprise. When asked if it was much trouble, Pinkie Pie claims it was a "[p]iece of cake" – but as the episode concludes, she shakes her head towards the audience via the iris-out suggesting it was the opposite.

Rainbow Dash: Watching somepony else be surprised with something is almost better than being the one who's getting the surprise!
Pinkie Pie: But... eh... what if the surprise is something so incredibly exciting that a pony can't keep it in any longer, and she has to tell the pony standing next to her what it is or she might explode?!
Fluttershy: I would say... no.
Rarity: The pony who ruins a surprise for somepony else has to live with that guilt forever!

Pinkie Pie: Maybe I can tell just one little pony the surprise?
Rarity: [with reverb] The pony who ruins a surprise for somepony else has to live with that guilt forever!
Pinkie Pie: You're right, spooky-reflection-of-Rarity-that-I-know-is-actually-my-own-imagination. I can't tell anypony at all!

Princess Cadance: You did it, Pinkie Pie! You kept it a surprise! Thank you! Was it much trouble?
Pinkie Pie: Piece of cake! [squee] 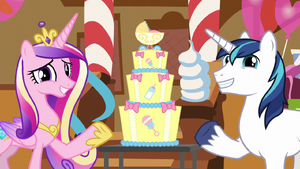 The One Where Pinkie Pie Knows image gallery