The Parent Map is the eighth episode of season eight of My Little Pony Friendship is Magic and the one hundred and seventy-seventh overall. The title is a play on the film series The Parent Trap.

In this episode, the Cutie Map sends Starlight Glimmer and Sunburst to their hometown of Sire's Hollow to solve a friendship problem with their parents.

According to supervising director Jim Miller and Stephanie Mahoney, Mahoney is responsible for the gag about Starlight Glimmer's childhood bedroom;[1] Mahoney "got to contribute! The storyboard and BG artists did a great job in the design."[2]

When asked on Twitter in August 2018 about the absence of Starlight's mom and Sunburst's dad, Miller replied, "It was two more characters to deal with in an episode full of new things. It just wasn’t necessary to add more to deal with."[3]

Ginger Beard, an original character of Hasbro senior brand designer Matt Riordan,[4] was incorporated into the episode at Hasbro's request.[5][6][7]

The episode begins at the Crystal Empire, where a mail delivery pony brings a distracted Sunburst a letter from a place called Sire's Hollow. Sunburst tosses the letter on a large pile of letters previously sent from Sire's Hollow before returning to his studies. All of a sudden, his cutie mark starts to glow, indicating that he is being summoned by the Cutie Map. Upon arriving in Ponyville, Sunburst is pleasantly surprised to find that Starlight Glimmer has also been called by the Map. However, Starlight is less than enthused because the Map is calling them to Sire's Hollow—their old hometown.

During the Friendship Express ride to the village, Starlight expresses frustration that her father always treats her like a child whenever she visits. Sunburst is similarly frustrated by all the letters that his mother sends him, asking what his plans are for the future. Starlight and Sunburst agree to stand up to their parents when they arrive so that they can focus on their friendship mission.

When Starlight and Sunburst arrive at Sire's Hollow, they discover a gate at the village entrance that was never there before, and several shops in town have been replaced by new, more urban businesses. On the other side of town, familiar shops and establishments have been declared untouchable sites of historical significance.

Starlight Glimmer's father Firelight arrives and, after smothering his daughter with affection, explains that he is preserving the village's history as the head of the Sire's Hollow Preservation Society. Meanwhile, Sunburst's mother Stellar Flare is trying to revolutionize the village and promote tourism as the head of the Sire's Hollow Development Committee. As a result of their conflicting views, Firelight and Stellar Flare have frequent heated arguments.

Starlight and Sunburst believe they were summoned to resolve their parents' dispute. When they explain to their parents why they have come, Firelight and Stellar Flare are more than eager to spend time with their children, but they refuse to see each other's point of view.

Over the course of several hours, Starlight and Sunburst experience the different changes their parents have made to the village. Due to Stellar Flare's changes, visitors are greeted by an annoying automated voice at the village's entrance, and fruit stands have been replaced by perfume stands and smoothie shops. Because of Firelight's changes, libraries and bookstores are closely protected and forbidden to enter, and bakeries only use ancient and stale grain in their bread.

When Firelight and Stellar Flare realize how carried away they got with their respective efforts, they agree to work together on a single vision that best befits Sire's Hollow. However, Starlight and Sunburst's cutie marks do not glow, meaning their friendship mission is not complete. As Firelight and Stellar Flare continue to smother their children with unwanted attention, Starlight and Sunburst resolve to find the real friendship mission they were summoned for and leave Sire's Hollow as soon as possible.

As Firelight tries to help Starlight Glimmer find her friendship mission, he continues to treat her like a child, causing her further frustration. Meanwhile, Stellar Flare puts pressure on Sunburst to solve his mission so that Princess Twilight Sparkle can send him on even more missions, even going so far as to fabricate friendship problems between the other villagers.

Exasperated by their parents' efforts, Starlight and Sunburst hide from them. As they wonder how they're going to find their mission with their parents constantly hovering over them, the village baker suggests that they try to find their mission on their own. They gather some of the village ponies in the darkest corner of the bookstore and ask if they have had any recent friendship problems.

As the group discusses whether or not Starlight and Sunburst are avoiding their parents, Firelight discovers them, and he and Stellar Flare continue to be unhelpful to their children. Starlight and Sunburst's frustration finally causes them to explode in anger. They tell their parents that they have been driving them crazy with their constant smothering and pressure to succeed. Their heated words cause Firelight and Stellar Flare to leave in tears and disappointment.

Starlight Glimmer approaches Firelight, who addresses her as "Miss Glimmer" instead of one of her many pet names, and says she figured out what her friendship mission is and needs his help to solve it. Meanwhile, Sunburst approaches Stellar Flare and apologizes for his harsh words, telling her he needs her help to finish his friendship mission. In the village's fountain square, Starlight and Sunburst explain to their parents that they've been sent to solve not a new friendship problem, but a friendship problem they already had.

Starlight apologizes to her father for not visiting home more often, and Firelight says he only acts overprotective of Starlight because of the hardships she faced while growing up. Sunburst tells his mother that while he understands how much she wants him to succeed, he wants to succeed on his own. Stellar Flare says she only puts pressure on Sunburst because of how lost he was after flunking out of school. As Starlight, Sunburst, and their parents reach an understanding, Starlight and Sunburst's cutie marks glow, indicating that their friendship mission is officially complete.

Firelight and Stellar Flare see their children off at the train station, and Starlight agrees to visit home more often as long as her father treats her less like a child and more like a friend. Sunburst and his mother come to a similar compromise, and when Stellar Flare entertains the idea of visiting Sunburst at his home, she and Firelight start planning an upcoming trip, much to their children's discomfort.

Sunburst: My cutie mark is glowing! I know what this means! Why am I yelling?!

"Ever Essence": [whispering] Why are we whispering?
Organic Baker: They're avoiding their parents.
"Ever Essence", "Raspberry Latte", and "Minty Mocha": Ohhhh... [various agreement]

Starlight Glimmer: Why couldn't we have been sent to stop a war or something?!

Firelight: I just know how hard things were for you when you left home. I guess I wanted you to feel safe, like... when you were young.
Starlight Glimmer: Dad, I know I've made some mistakes, and I'll probably make a bunch more. But I learn from them. I think that's what growing up is.

Stellar Flare: I remember how lost you were when you flunked out of magic school. I thought as long as you had a plan, you'd never feel that way again.
Sunburst: You don't have to worry, Mom. I need to find my own way. And I definitely don't feel lost anymore. 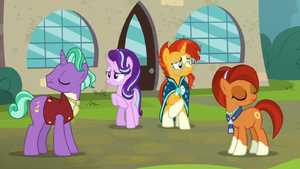