The Point of No Return

The Point of No Return is the fifth episode of season nine of My Little Pony Friendship is Magic and the show's two hundred and first episode overall.[1]

In this episode, Twilight Sparkle realizes she never returned a book to the Canterlot Library and may have caused her favorite librarian Dusty Pages to lose her job.

The episode begins with mail delivery pony Derpy delivering a large package to the School of Friendship for Twilight Sparkle. Princess Celestia explains via magic scroll that she found some of Twilight's old belongings during a cleaning of Canterlot Castle. Among the collected knickknacks from Twilight's childhood, Spike discovers an old library book that Twilight never returned to the Canterlot Library.

Unwilling to tarnish her perfect book-borrowing record or disappoint her favorite librarian Dusty Pages, Twilight heads for Canterlot to return the book.

Outside Canterlot Library, Twilight hides her face from the shame of setting a bad example for other library book-borrowers, but Spike tells her that everyone makes mistakes, including princesses. Inside, they meet with the new head librarian, who does not know who Dusty Pages is, and Twilight tries to return her old library book, suddenly realizing how much she might be fined for late fees.

The librarian tells Twilight to see First Folio in the library's Office of Overdue Returns in the basement, but when Twilight and Spike go there, they discover that First Folio is out to lunch somewhere on Restaurant Row. Spike suggests trying again at a later time, but Twilight refuses to put off returning the book any longer, and she proposes going to find First Folio at the restaurant where she is having lunch.

Twilight and Spike's search for First Folio leads them to Coriander Cumin and Saffron Masala's restaurant, The Tasty Treat. As Spike is mistaken for a waiter, Twilight finds Moon Dancer having lunch with First Folio. Moon Dancer and First Folio explain that Dusty Pages left the Canterlot Library long ago, allegedly having been forced to leave because someone checked out a book and never returned it, ruining Dusty's perfect librarian record. Twilight is horrified at the thought that her overdue book led to Dusty Pages being fired from her job.

Twilight heads to Dusty Pages' home, believing if she gives Dusty the overdue library book to return to the library herself, she can get her job back. However, Dusty has moved away, and someone else is living in her old house. The stallion living there tells Twilight and Spike that Dusty is now living somewhere that has the word "Silver" in its name, and he gives them a large bag of Dusty's unforwarded mail.

Twilight and Spike travel to various "Silver" locations around Equestria in search of Dusty Pages, such as Silver Shoals, but they are unable to find her. Their search eventually leads them to the Silver Stable Retirement Community, and the front desk receptionist tells them Dusty is living in one of the ground floor apartments. All the while, Twilight is convinced that Dusty is miserable over the loss of her job.

When Twilight and Spike knock on Dusty's front door and realize she is not home, they ask around the community about her whereabouts. Some elderly ponies at the pier tell them Dusty has a busy day of activities, including woodworking, windsurfing, theater, and band practice. Twilight and Spike search for Dusty at these areas around the retirement community, but they always just miss her, arriving moments after she has left.

When Twilight and Spike finally catch up with Dusty Pages, she is playing lead guitar in a band of elderly ponies. Spike thinks Dusty looks perfectly happy, but Twilight believes she is merely masking the pain of losing her job. As Twilight interrupts band practice, she and Dusty have a happy reunion. Dusty is surprised to learn that Twilight was the one who broke her perfect librarian record, and when Twilight offers to help set things right and get Dusty's job back, Dusty refuses and bitterly storms off.

Twilight falls into despair—not only because of her guilt of getting Dusty fired, but also because of her own tarnished book-borrowing record and the late fees she is still racking up. With Spike's encouragement, she vows to find out why Dusty refuses to return to the library. Twilight and Spike follow Dusty to the grounds of a fruit-tossing food fight tournament, and Dusty declares a timeout so they can talk.

Twilight expresses her immense guilt over causing Dusty to lose her job and asks how she can make up for it, but Dusty reveals that she was never fired. She explains that after years of trying to maintain her perfect record, having it broken made her realize perfection is not everything, and she left her job voluntarily in order to live life the way she truly wanted. This point is further emphasized by the title of Twilight's overdue book: Perfection: The Impossible Pursuit.

Back at the Canterlot Library, First Folio adds up Twilight's late fees for the overdue book, which come out to only twenty-eight bits. Twilight eagerly pays the amount, and since the book has long been replaced by a newer edition, she decides to keep it as a constant reminder that perfection is not everything.

Derpy: We just had a really heavy delivery today.
Spike: Is it a deluxe set of special edition Ogres & Oubliettes figurines that I'm totally surprised by and have been hinting that I need forever?
Derpy: Well, it's for Twilight.
Spike: Awww...

Pretzel: Waiter, we're ready to order.
Spike: Oh, uh, I'm not actually—
Pretzel: Three samosas, two curry specials... Do you think that's enough for the two of us?
Spike: Hm. Well, I would probably order some naan as well. For the table?

Meathead Pony: Didn't you see the sign? No salesponies!
Twilight Sparkle: Oh, I'm not selling anything.
Meathead Pony: No carolers either. No surveys, no petitions, no free literature...

First Folio: Uh-huh... Your total late fees come to...
Twilight Sparkle: However much it is, I'll cover it. Uh, do you have a monthly payment plan?
First Folio: Twenty-eight bits.
Twilight Sparkle and Spike: [gasps]
Spike: That's it?!
First Folio: Yah-huh. Most ponies don't know that it caps at a month. Probably 'cause we don't tell them. [snorts] 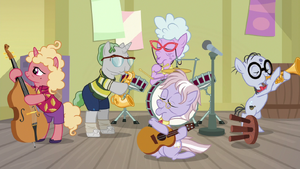 The Point of No Return image gallery