The Pony Tones, or Ponytones, are a vocal quintet who appear in Filli Vanilli. The group is initially a quartet consisting of Rarity (soprano), Big McIntosh (bass), Toe-Tapper (tenor), and Torch Song (alto); Fluttershy later joins the group as a part-time fifth member.

The Pony Tones are a singing ensemble of ponies who perform for various social events and charities in Ponyville. When first introduced, they are to perform for a fundraiser that Fluttershy organizes for the Ponyville Pet Center. However, prior to the fundraiser's scheduled time, Big McIntosh loses his voice during a turkey call competition. Using a potion that Zecora brews from poison joke leaves to deepen her voice, Fluttershy sings for Big Mac behind a curtain (suffering from stage fright) while Big Mac lip-syncs.

As a result of their performance at the fundraiser, the Pony Tones are approached to give additional performances at Zipporwhill's cute-ceañera, a ribbon-cutting ceremony hosted by Mayor Mare, the Day Spa, and Cheerilee's class of school foals in the Ponyville Schoolhouse. With each performance given, Fluttershy's confidence in herself rises, but she also starts improvising her part, making it difficult for Big Mac to keep up with her. For their next performance at Sugarcube Corner, Big Mac recovers his voice, but agrees to let Fluttershy sing for him one last time. However, Fluttershy gets carried away and exposes herself; despite her embarrassment, her performance is praised.

Toward the end of the episode, Fluttershy joins the Pony Tones as a part-time fifth member, privately performing at her cottage for her pony and critter friends. However, she declines making public appearances with the band, citing the "baby steps" she is taking to overcome her stage fright.

The Pony Tones get mentioned by Rarity and they appear in a poster in a flashback of Filli Vanili in Memnagerie, during the part when Rarity offers Fluttershy a spot but she declines due to her stage fright.

The Pony Tones' human counterparts, referred to as the "Wondertones", appear in the Equestria Girls: Summertime short "Steps of Pep".

The Pony Tones make a brief appearance at the Convocation of the Creatures on My Little Pony: Friendship is Magic Issue #61 page 18 and Issue #62 page 17.

In Rarity and the Curious Case of Charity chapter 1 "A Pony of Prominence", the story's narration mentions the Pony Tones as having only four members. In Fluttershy and the Fine Furry Friends Fair, the Pony Tones are mentioned in chapter 9 "The Fine Furry Friends Fair" and appear in chapter 12 "Singing a Different Tune". In Discord and the Ponyville Players Dramarama, Toe-Tapper appears on the Ponyville Players Audition Committee, and Torch Song appears as the assistant director. In Ponyville Mysteries: The Tail of the Timberwolf, the Pony Tones appear as entertainment at Zipporwhill's birthday party in chapter 4.

Toe-Tapper and Torch Song are available characters in Gameloft's mobile game; they were added to the iOS version of the game on June 4, 2014 and to the Android version of the game on June 10, 2014. Torch Song is also a boss battle helper during the "Rarity's Retro Revolution" event. Toe-Tapper's in-game description states "Toe-Tapper is a jiving member of the Pony Tones ensemble, so you won't catch his hoofs standing still during a boogie!" Torch Song's in-game description states "Torch Song has a honeyed voice that sounds aca-perfect alongside her acapella chums, the Pony Tones!"

The Pony Tones appear on the Season 4 poster.

In the Equestrian Odysseys expansion set of Enterplay's collectible card game, card #49 C is of Torch Song, and card #101 U is of Toe-Tapper.

The Pony Tones are shown on WeLoveFine's fan-designed "Got the Music In You" T-shirt. 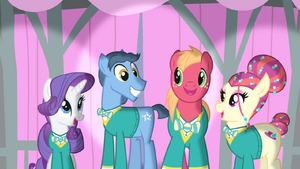