Cheerilee's class walking through the garden

"That one over there represents friendship"

In to each friendship, some rain has got to fall.

Being led into the world-famous garden

"How cool would it be to have that for a cutie mark?"

The CMC being cute in confusion.

"Cool, if you were actually victoryful at somethin'."

"What are you, a dictionary?"

Discord has been found.

Cheerilee pointing to a statue that looks like Discord.

Look how high I can jump!

"Don't call me things I don't know the meaning of, and it is too chaos!"

Somepony is about to stomp on her friends.

That must have hurt since their heads were struck by Apple Bloom's hooves.

Diamond Tiara make their first appearance in Season 2, so do Snips and Snails.

Girls, do I have to deal with this?

Now if you're all done earning yourselves extra homework...

The Cutie Mark Crusaders being cute

The Cutie Mark Crusaders being cute and disappointed

Snips and Snails, Twist, Silver Spoon and Diamond Tiara, laughing at the CMC

Twist and Sliver Spoon find it funny, as well.

The Crusaders still arguing over what the statue represents.

Rainbow Dash getting ready to chase the unknown

This is not the kind of weather I usually expect.

"It's not supposed to rain until tomorrow!"

Applejack picking corn on her farm.

Come back here, you!

Rarity,comes to help her way.

Fluttershy in the rain.

Twilight using her magic in the rain.

That looks like it took quite a bit of studying.

Well, that was a failure.

"Spike, Twilight will come up with something."

It's time for Plan B!

Rainbow Dash gets the task of combining the clouds together

Fighting with the cotton candy cloud.

On goes the rope!

Pinkie Pie getting down and dirty.

"Oh dear. I hope none of the animals see these delicious chocolate-filled cotton candy clouds."

I guess that's us!

Tying it all together.

"You see, Spike? You should never give up."

Spike firing up a letter from Princess Celestia.

We need you to come!

"Come on girls. Princess Celestia wants to see us all in Canterlot immediately!"
Add a photo to this gallery

We came as soon as we could!

"Is this about the weather? And the animals' weird behavior? What's happening out there?"

"I've called you here for a matter of great importance."

"It seems an old foe of mine, someone I thought I had defeated long ago, has returned."

Image of Discord on the window.

"Discord is the mischievious spirit of disharmony."

"Before my sister and I stood up to him, he ruled Equestria in an eternal state of unrest and unhappiness."

"Luna and I saw how miserable life was for Earth ponies, Pegasi, and unicorns alike, ..."

"...so after discovering the Elements of Harmony, we combined our powers and rose up against him, turning him to stone."

"I thought the spell we cast would keep him contained forever..."

"...but since Luna and I are no longer connected to the elements, the spell has been broken."

"This is Canterlot Tower, where the Elements are kept inside since all of you recovered them."

"I need you to wield the Elements of Harmony once again and stop Discord..."

"...before he thrusts all of Equestria into eternal chaos."

"You six showed the full potential..."

"...of the elements by harnessing the magic of your friendship..." 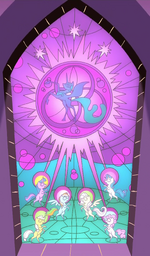 "Although Luna and I once wielded the elements, ..."

I really need your help, girls.

"Don't listen to her, Princess."

The Pony version of a palm scanner?

Don't go into the light!

"You can keep the Elements. I'll take that case!"

"Have no fear, ponies. I have total confidence that you will be able to defeat Discord with these!"

Huh, an empty space in a box that can defeat Discord. That's new.

Well, this is awkward

"That chamber is protected by a powerful spell that only I can break! This doesn't make sense!"

"Make sense? Oh, what fun is there in making sense?"

A stained glass of Discord.

Discord in a stained glass window?

"Oh, I just borrowed them for a teensy little while."

"You'll never get away with this, Discord!"

"Oh, I'd forgotten how grim you can be, Celestia."

"It's really quite boring."

Flying straight for the stained glass..

Rarity is so adorable!

Discord talking about Rarity and her Element.

He knows my Element?!

"Stop stalling, Discord! What have you done with the Elements of Harmony?"

"Twist and turns are my master plan."

"Then find the elements back where you began."

He must be keeping the Elements of Harmony in that labyrinth.

"The fate of Equestria is in your hooves."

Right. Oh, yeah, one more thing. I never knew you were ever gonna call us by the name of a kid's animated TV show.
Add a photo to this gallery

Entrance to the presumed "Labyrinth"

Mane 6 in front of the maze entrance.

I can fly so very high!

There went those wings

Rainbow Dash in midair with no wings.

Unicorns can't be unicorns, without their horns...

Discord on all fours

Awwwh, you should see how cute you are when you're scared!

"Give us our wings and horns back!"

"You'll get them back in good time. I simply took them to ensure there's no cheating."

"You see, this is the first rule of our game."

Another shot of Rainbow Dash without wings

All the ponies have to play along

"The second rule is everypony has to play or the game is over, ..."

"Never fear girls. We have each other."

"Yeah! Like Twilight said, there's nothing we can't overcome if we all stick together!"

Sounds good to us.

The gang is ready to enter the labyrinth.

Twilight and her friends caught off guard

They are all panic-stricken until Twilight tells them "Calm down!"

"Everypony head to the middle as fast as you can, and we'll regroup there!"

"See you in the center."

"See you guys there!"

Frightened Fluttershy screaming. (Note: If you see the screen zoom out. You zoom in and see that Rarity has her horn.)
Add a photo to this gallery

Applejack in the labyrinth

Get back here, you!

Applejack running off into uncharted territory.

What is going on here?

Why are you apples circling me?

"...but I've got a really bad feelin' about this feller Discord."

"What's gonna come of this mission we're on?"

The Six seems to be in a conversation

"I hope I never see you again!"

"That just can't be the truth."

"When all the truth does is make your heart ache, ..."

Applejack to Liarjack.:"Ave' got no color change!"

Ah, there you are, Applejack!

Smiling and looking cute at the same time.

"I thought I heard voices over here."

"Who were you talking to?"

What? I'm not lying..why would you say such a thing?

What's up with Applejack?

"Come on, Twilight! Applejack wouldn't lie."
Add a photo to this gallery

What does Pinkie see?

Lots of balloons with lots of smiles. What more do you want?

"Whee! This is the greatest balloon garden I've ever seen!"

"What's the matter, Pinkie Pie? I thought you appreciated a good laugh?"

"It's different. They're laughing at me."

"It's hardly different. Your friends laugh at you all the time."

"My friends laugh with me, not at me."

We'll see about that!

Pinkie Pie freaked out by the balloons

Twilight's,Applejack's and Fluttershy's faces on the balloons.

Rarity's and Rainbow Dash's faces on the balloons.

Pinkie Pie getting laughed at by her balloon friends

Staring contest with a balloon.

Pinkie, being turned her opposite self.

Pinkie Pie to Meanie Pie:"WHAT'S SO FUNNY ABOUT GREY, HUH?!

And then all balloons pop.

Ah, there you are, Pinkie!

"Pinkie? What do you suppose has her so upset?"

"I didn't notice anything strange about Pinkie."

"Better pick up the pace before the stress of this gets the better of all of us."

My plan is working great.
Add a photo to this gallery

"I was expecting an audience with the Princess, not outdoor sports."

Aww! Look at her eyes!

It is time to get hypnotized.

Rarity is about to be corrupted.

Admit it, you make this same face in the Pony aisle

"No, I shan't succumb to such fabulousness."

Only Rarity can mine diamonds with bare hooves and without an iron pickaxe.

"...would turn out to be this handsome hunk of a diamond?"

Rarity, there you are.

"Why are you carrying a humongous boulder?"

"Keep your envious little eyes off it! I found it and it's mine fair and square!"

Yeah, so you're seriously going to carry the boulder all the way to home?

The situation is getting worse and worse.
Add a photo to this gallery

So much for being brave.

"Fluttershy, looks like you've been left behind by your so-called friends, huh?"

"Oh, no. I'm certain they're doing their best to find me."

"Well, it must be so upsetting to know how weak and helpless they think you are."

"Not at all. I am weak and helpless and I appreciate their understanding."

"Yes... Well, surely it burns you up... I mean, that they're always pointing out your flaws, right?"

"In fact, I think I'm awfully lucky to have friends who want me to be the best I can be."

Too bad you can't corrupt her without cheating, Discord...

"You've been kind for far too long, my dear."

Ah, Fluttershy, there you are.

"Fluttershy! I'm so glad to see a friendly face."

"This awful labyrinth is getting to every pony."

"Why don't you wave your magic little horn and make everything all right?"

Pinkie falls onto the ground, while Applejack laughs at her.

"And what are you laughing at?"

"But don't get any ideas about my gem! I know where you live."
Add a photo to this gallery

Get back here, you!

These are some nice clouds don't ya think Rainbow Dash?

"Listen closely. This is important."

"A weighty choice is yours to make."

"The right selection or a big mistake."

"...the foundations of home will crumble without you."

If only lightning bolts were colorful...

Is it Rainbow Dash's birthday?

"That box contains your wings. You can take them and leave the game, or you can carry on aimlessly wandering this maze. Your choice."

From Rainbow Dash to Traitor Dash.
Add a photo to this gallery

"Well, looky there. Rainbow Dash is flying away. She's abandonin' us."

"Game's over, my little ponies. You didn't find your precious elements."

Discord's umbrella is as twisted as he is!

Game over!
Add a photo to this gallery
Retrieved from "https://mlp.fandom.com/wiki/The_Return_of_Harmony_Part_1/Gallery?oldid=2189582"
Community content is available under CC-BY-SA unless otherwise noted.