The Return of Harmony Part 2

The Return of Harmony Part 2 is the second episode of the second season of My Little Pony Friendship is Magic and the twenty-eighth episode overall. In this episode, Twilight Sparkle must find the Elements of Harmony, and a way to restore her friends, in order to defeat Discord. It is the second half of a two-part episode.

According to Lauren Faust, Applejack was originally scripted to climb to the top of the balloon to get to the basket to rope Rainbow Dash.[2]

Unlike in Boast Busters, Call of the Cutie, and Party of One, the Treehouse airing of this episode didn't mute the word "loser" when Fluttershy says it.

A storm of chaos

Continuing after a short recap of the first part, Twilight Sparkle, Pinkie Pie, Applejack, Fluttershy, and Rarity argue in the remnants of the castle hedge maze in Canterlot. When Twilight tells Discord he unfairly claimed that the Elements of Harmony were hidden in the maze, he reminds her that he never said so. Discord leaves to begin his reign of chaos, mockingly telling Twilight that maybe the "magic of friendship" can help her. Twilight decides to search for the Elements of Harmony in Ponyville.

Finding the Elements of Harmony

On the return trip to Ponyville by foot, the disgruntled ponies encounter soapy roads and long-legged bunnies. Discord reappears, announces to Twilight that Ponyville will become the "chaos capital of the world", and vanishes. The ponies finally arrive at Golden Oak Library, but when Twilight tries to usher her friends inside, they lose even more of their color. Rarity refuses to go inside, saying she's on to Twilight's "plan" to steal "Tom" from her. Twilight finds out that Tom is Rarity's name for the boulder. Resigned, Twilight levitates the boulder and crashes it through the door, leaving a giant hole in the wall. Once inside, Twilight asks Spike to retrieve the book about the Elements of Harmony, but her friends play a game of Keep Away with the book, keeping it out of her reach. Once Twilight finally gets her hooves on the book, she finds that all of the Elements of Harmony are tucked away inside.

Frustrated that her friends no longer care about this discovery or the current crisis, Twilight forcefully puts the elements on Fluttershy, Pinkie Pie, Applejack, Rarity, and Spike, who she assigns the role of Rainbow Dash. Twilight rallies the ponies with the plan of defeating Discord so they never have to see each other again, and they all gleefully go outside, except Rarity, who has trouble pushing "Tom" ahead of her. Twilight angrily chucks the boulder out the window, leaving another giant hole in the wall. Discord appears outside of the library, taunting them into stopping him by making a bulls-eye appear on his chest for them to "fire" at. Twilight attempts to combine the elements' power to defeat Discord, with Spike standing in for Rainbow Dash, but nothing happens. As the ponies go their separate ways, Twilight's colors turn dull and she sheds a tear that splatters in the shape of a broken heart. Discord celebrates his victory as Ponyville is driven even deeper into total chaos.

Re-discovering the importance of friendship

Twilight throws away her element of magic tiara and tells Spike that they are leaving Ponyville. However, Spike starts regurgitating a seemingly endless pile of scrolls from Princess Celestia, which turn out to be all of the friendship reports Twilight had sent to her during her time in Ponyville. After reading her own friendship reports, Twilight remembers the importance of friendship, regains her resolve and color, and sets out to restore the rest of her friends.

Reverting to their previous selves

Twilight finds Applejack at Sweet Apple Acres, and uses a memory spell to project memories of past adventures with her friends into Applejack's mind. Applejack regains her color and goes back to her original self. She confesses that she told lies because she could not face a future of their friendship ending. Twilight then performs the same spell on Fluttershy, and Fluttershy exclaims that she just had the worst dream. Twilight restores Rarity, who tosses away the boulder and says, "Let us never speak of this again." Next is Pinkie Pie, who laughs at her previous predicament.

The friends find Rainbow Dash, who is still brainwashed and sitting upon a small cloud, believing it to be Cloudsdale. Twilight and the other ponies sneak up to a sleeping Rainbow Dash in Twilight's balloon, and Fluttershy tries to hold down Dash so Twilight can restore her personality. However, Fluttershy, now back to her kind personality, cannot take an aggressive approach and wakes up Dash to politely ask her if she can hold her down. This prompts Dash to grab onto "Cloudsdale" and fly away. Twilight, Rarity, Applejack and Pinkie Pie give chase in the balloon, which Fluttershy is pulling. Applejack manages to lasso Rainbow Dash, but the rope catches on Pinkie Pie and Rarity's hooves, dragging them out of the balloon as Rarity yells that Pinkie was supposed to secure the rope, still attached to the elusive Pegasus. Fluttershy is unable to keep up until she is reminded about Discord's rule over Ponyville. With that, she outpaces Rainbow Dash and the others are able to secure her while Twilight reverts Dash to her previous self.

"I'll tell you what we've learned Discord. We've learned that friendship isn't always easy. But there's no doubt it's worth fighting for."
— Twilight Sparkle

The friends confront Discord, who is sitting on a throne holding a glass of chocolate milk. He drinks the glass and throws away the chocolate milk, which explodes. Discord, still confident of their inability to defeat him, makes himself an open target. However, now that the six ponies can wield their elements, they combine their powers and fire a giant rainbow, just like they did when they defeated Nightmare Moon, causing an explosion much like Rainbow Dash's sonic rainboom. Discord watches in horror before he is turned to stone once more. Ponyville goes back to normal, and all chaos and disharmony caused by Discord is neutralized.

At the end of the episode, Princess Celestia holds a ceremony in Canterlot, honoring the ponies for defeating Discord, where a new stained glass window depicting the friends' victory is unveiled.

According to director Jayson Thiessen, one of the storyboard artists decided to board the award ceremony sequence at the end of the episode as a shot-for-shot equivalent of Star Wars Episode IV: A New Hope, though parts of the sequence were ultimately cut to shorten the episode.[3]

Discord: Keep trying, Twilight Sparkle. [mockingly] Maybe the magic of friendship can help you. Now if you'll excuse me, I have some chaos to wreak.

Discord: Picture it, the chaos capital of the world!
Twilight Sparkle: I can't picture anything, it's too dark.
Discord: Well, wait a few minutes and then you'll see the beautiful light of day, or not.

Spike: [snore] Ah! Brrr! What did you do that for, Fluttershy?
Fluttershy: 'Cause you just looked so peaceful.

Twilight Sparkle: With friends like you, who needs... enemies...?

Twilight Sparkle: I've got to fight for my friendships. For them. For me. For Equestria!

Rarity: Let us never speak of this again.

Rainbow Dash: Pfft! Loyalty, schmoyalty! Have you seen Ponyville? It's a disaster! I'm staying here in Cloudsdale where everything's awesome.
Rarity: How in Equestria can she think that tiny patch of clouds is Cloudsdale?
Applejack: The same way he got you to think that cheap rock was a bona fide diamond.
Rarity: I thought we agreed never to speak of that again.

Fluttershy: Um, I'm just wondering if it's okay if I held you down against your will for a little bit.

Rarity: Oh, Fluttershy, would you be a dear and fly faster, please?
Fluttershy: [whimper] I can't!
Twilight Sparkle: If you can't catch her, Discord wins!
Fluttershy: That... big... dumb... MEANIE! 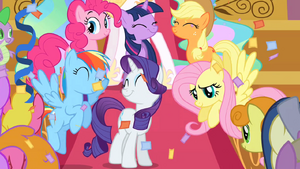