The Saddle Row Review, early title Saddle Row & Rec[1] used by some sources,[2] is the ninth episode of season six of My Little Pony Friendship is Magic and the one hundred and twenty-sixth overall.

When Rarity opens her flagship store in Manehattan, a tell-tale article threatens to expose how her friends almost ruined the grand opening.

In production order, this is season six episode ten. The episode's premise was conceived on December 8, 2014. The first and second outlines were written on January 18 and February 2 of 2015, respectively. The script's first and second drafts were respectively written on February 11 and 26, and polished on March 16 and 25. The final script was polished, approved, and locked on April 2.[3]

Some sweep lines were cut for time.[4]

Jim Miller was asked "Are we gonna see more of THAT one Pinkie Pie from today's episode?" and replied "No plans. It was a gag."[5]

The scenes when Rarity For You becomes a success, and Rarity finishes reading her article reappear in A-Dressing Memories.

The episode begins with Twilight Sparkle and her friends racing to Carousel Boutique to stop Rarity from reading her morning newspaper. Expecting a review to be printed about the disastrous grand opening of Rarity's new boutique in Manehattan, the ponies feel guilty for causing the chain of events leading up to it. Fortunately, when they arrive at Rarity's home, she has not yet read the review.

"...Now we can all read the review together!"
— Rarity

The ponies try to stop Rarity from reading the review and explain what happened during the grand opening, but she insists on "no spoilers".

As Rarity starts reading the article, the episode flashes back to a diner in which Manehattan columnist Buried Lede interviews Rarity and her friends one-on-one about the opening of Rarity For You. Rarity begins her interview with high hopes, but her friends express how much of an ordeal it was.

The episode flashes back further to Rarity and her friends walking through Manehattan's "Saddle Row", a street lined with numerous famous boutiques and where Rarity For You is located. With the inside of the boutique a dusty shambles, Twilight wonders if it will be ready for the grand opening that evening, but Rarity remains ever hopeful.

However, a number of additional problems arise. Rarity's pushy landlord Mr. Stripes arrives and strong-arms her into giving his daughter Plaid Stripes—who lacks business experience—a job in the boutique. In addition, a family of raccoons has taken up residence in one of the boutique's back rooms, and the upper floor is home to DJ Pon-3's noisy dance club. Plaid Stripes starts making changes to the store that Rarity disagrees with, Rarity's merchandise delivery arrives in a disorganized mess, and Coco Pommel—whom Rarity has hired to work as a salespony—is unable to help with the grand opening due to a cold.

Everything must be perfect

With everything rapidly falling apart, Twilight suggests postponing the opening of Rarity For You, but Rarity disagrees because of Manehattan's high standards. Her friends realize the tall task ahead of her and offer to help while keeping true to Rarity's vision.

Unfortunately, this leads to even further misfortune as Rainbow doesn't know who to hire, Applejack draws the fury of Plaid Stripes' father, DJ Pon-3 continues to blast loud music upstairs, and the raccoons angrily turn on Fluttershy. Before Rarity can come out and see the chaos building inside the boutique, Twilight locks her in the window display room.

Twilight asks how all this happened, and the other ponies explain that they acted in accordance to what they believe Rarity wanted. Considering how well Rarity knows her closest friends, Twilight realizes she would want them to help in their own ways, not just Rarity's way. With this in mind, the ponies resolve to fix the mess they created.

Fluttershy allows the raccoons to stay in the building in return for a favor, Pinkie Pie appeals to DJ Pon-3, Rainbow Dash organizes a race between the potential employees, and Applejack helps Plaid Stripes make a unique contribution to the boutique.

That evening, Twilight finally lets Rarity out of the window display room so she can behold the work her friends have done. Immensely pleased by their efforts, Rarity officially opens Rarity For You to the public. The employees that Rainbow Dash hired assist with the large crowd, DJ Pon-3 provides ambient music courtesy of Pinkie Pie, and Fluttershy's raccoons and Plaid Stripes provide fancy snacks. With the help of Rarity's friends, the grand opening of Rarity For You is met with overwhelming success.

Back in present day, Rarity finishes reading the boutique opening's glowing review in her newspaper, reading about how the combination of Rarity's vision and her friends' expertise helped pull everything together. She asks the others why they didn't tell her there were so many problems, and they explain that they didn't want to burden her with a non-perfect grand opening.

"'Ne'er-do-wells' or not, I know I can always count on all of you. Nothing could be more perfect than that."
— Rarity

Rainbow Dash: Um, I have an idea. How 'bout we don't read it.
Twilight Sparkle: What she means is, before you read it, we should probably tell you about—
Rarity: No, no, darling. Please, no spoilers.
Fluttershy: But—
Rarity: NO SPOILERS!

Rarity: Ugh! Foals today listen to their so-called "music" far too loud. I realize that makes me sound like an old mare. But this is business!

Pinkie Pie: Yeah. Making copies of yourself always sounds like a great idea, but before you know it, you're locked in a room with fifty Pinkie Pies watching paint dry.

Rainbow Dash: What would she do without us? Huh. Lemme think. [imitating Rarity] "Darlings, I'm absolutely doomed, doomed, doomed!" [laughs, normal voice] I sound just like her!
[pencil scratching]
Rainbow Dash: Hey, you're not writing this down, are you?

Pinkie Pie: Oh, I can't really stop a super fun party in the middle of mega-happy fun times, can I?! Oh, what would Rarity want?!
Rarity Devil: Keep that party going till the break of dawn!
Pinkie Pie: Really?
Rarity Angel: Indubitably! And as for the roof, get jiggy! Raise it, Pinkie! Raise it like you've never raised it before!
Pinkie Pie: Oh! If you say so!
Rarity Devil: Oh, please, Pinkie Pie. Never in a million years would I say such balderdash!

Twilight Sparkle: How did this happen?
Pinkie Pie: I shut down the party.
Applejack: I told Plaid Stripes no.
Fluttershy: I asked the raccoons to leave.
Rainbow Dash: I asked a lot of fabric questions.
Pinkie Pie, Applejack, Fluttershy and Rainbow Dash: Just like I thought Rarity would want! 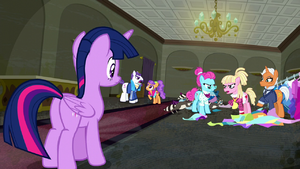