The Show Stoppers is the eighteenth episode of the first season of My Little Pony Friendship is Magic. In this episode, the Cutie Mark Crusaders believe that winning a talent show will help them earn their cutie marks. The title of this episode may be literally referencing the Cutie Mark Crusaders' antics, in which they perform a theatrical showstopper - a performance that garners enthusiastic or prolonged applause, which usually forces the performers to stop the performance until it has died down. An alternate meaning in business terms, however, is an action or event that puts a halt to all other activities until it can be resolved.

According to Cindy Morrow, this episode was originally titled "No Talent Show."[1]

The episode begins with Applejack leading the Cutie Mark Crusaders through Sweet Apple Acres, without telling them where they're going. They eventually reach an old clubhouse that she used as a filly. Unfortunately, the group is less than thrilled at this hand-me-down clubhouse because it's in disrepair from years of neglect. Applejack tells them that they can fix it up to become their new base of operations, then immediately falls through a wall.

Later, Scootaloo stands in front of Golden Oak Library and adds it to a hoof-drawn map of Ponyville. After a high-speed run on her scooter she returns to the clubhouse, which Apple Bloom has completely repaired. Meanwhile, Sweetie Belle is dusting and making up a theme song for the group.

With everything set up, they continue their quest to find their special talents. The adventure takes them everywhere on their map: they feed pigs at Sweet Apple Acres, make taffy at Sugarcube Corner, style hair at Rarity's boutique, use a modified form of Zener cards, climb rocks, and go scuba diving. Each attempt is a spectacular failure, after which they look eagerly at their flanks but do not receive their cutie marks. The last stop on their map is Twilight Sparkle's library. The musical score during the montage of their attempts is the same music that plays during Diamond Tiara's cute-ceañera in Call of the Cutie and both Gummy's and Pinkie Pie's birthday party in Party of One.

Preparing for the show

Twilight Sparkle and the girls' teacher, Cheerilee, walk into the library and see the Crusaders among a huge pile of fallen books. Twilight asks what's going on, to which Apple Bloom replies, "Well, we sure aren't gettin' our cutie marks for bein' librarians." Twilight tells them that they're trying to get their cutie marks the wrong way, and suggests they do things in areas they already like. Cheerilee shows them a flier for a talent show that will be taking place the next day. With so many possibilities to find their talents, the fillies start to plan their show, each making bizarre or dangerous suggestions. Twilight again urges them to do something they're already good at. The girls say they can do that, then go around town collecting and borrowing random items.

"My little ponies! Think about the things you already enjoy doing. Think about what you're already good at."
— Twilight Sparkle

Inside the clubhouse, the Crusaders come up with a plan for the show: a spectacular musical number. Apple Bloom suggests Sweetie Belle as the singer, but Sweetie Belle is afraid to sing in front of a crowd and says she would rather be like her sister, Rarity, and design the scenery. Despite Scootaloo's agility, she decides to sing instead of doing the choreography, thus leaving the job to Apple Bloom, though the closest thing she knows is Kung Fu. They all fail miserably while practicing but help each other out in the process.

While they're finishing their preparations, Applejack comes to check on them. She sees their act is terrible and hesitates when they ask her opinion. Thinking she's impressed, they feel ready to wow the crowd.

The show begins with Snips and Snails trying to pull off a magic trick, and then Sunny Daze and Peachy Pie doing a poem on roller skates. Backstage, the Cutie Mark Crusaders talk with Twilight, who initially tells them they'll do great but looks worried when she learns that they aren't sticking to their own talents. The performance starts off smoothly, but soon Scootaloo begins singing off-key, Apple Bloom starts accidentally dancing into scenery, and Sweetie Belle struggles to maintain the backdrops and effects. In the end, the entire act literally falls on top of them, and the audience laughs. They slink backstage, wondering if they were really "that bad." Cheerilee meets them and tells them to go back onstage for the awards, but they're too embarrassed. She tells them to be good sports, so they return with her while trying to hide behind the other performers.

To their surprise, they win the award for best comedy act, which immediately perks them up until they find out they still haven't gotten their cutie marks. After the show, Twilight congratulates them for a job well done and asks them if they learned anything, saying she could make a special friendship report. As she asks them questions, they seem to understand their mistakes, eventually reaching the conclusion that their true talent is comedy instead. Applejack, Rarity and Rainbow Dash come backstage, and the Cutie Mark Crusaders run off to talk with them. After the Crusaders run off, Twilight chuckles and expresses hope that the fillies will one day figure out their talents.

Applejack: It just needs a little... TLC.
Scootaloo: TLC as in "Tender Loving Care" or "Totally Lost Cause"?

Twilight Sparkle: "Ghosts, Goblins, and Ghoulish Figures"? Good heavens, girls, what do you need a book like this for?
Scootaloo: You'll see, thanks Twilight! We'll give it back as soon as we're done with it.
Twilight Sparkle: What do you think they're up to?
Spike: I have no idea, and I don't know if I should be excited or scared to find out.

Scootaloo: We fight the fight! Walk the walk! Talk the talk! Eat the... uh... food. Like a celery stalk?

Apple Bloom: We should be embracing our true talent!
Twilight Sparkle: And that is...?
Cutie Mark Crusaders: Comedy! 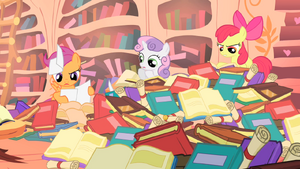