Start a Wiki
The Smooze is a slime creature who first appears in the season five episode Make New Friends but Keep Discord. He is Discord's friend and guest to the Grand Galloping Gala. Though Discord mentions that the Smooze is genderless, he is often addressed with male pronouns.

The Smooze is based on an identically-named antagonistic entity in the 1986 feature film My Little Pony: The Movie. It is concocted by witches who wish to destroy the ponies' idyllic life. The 1986 Smooze is a grayish purple viscous fluid, and it gradually spreads all over Ponyland. The witches claim that a properly made Smooze cannot be stopped, but they miss some ingredients when making it, and eventually the fluttering of the wings of Flutter Ponies manages to drive back the Smooze.

The Smooze appears in Make New Friends but Keep Discord as Discord's "plus-one" to the Grand Galloping Gala. His arrival to the Gala is initially met by other Gala guests with gasps of surprise and disgust. He appears as a sticky green ball of slime, and leaves a trail of slime wherever he moves. He consumes jewels and other shiny valuables and grows in size whenever he eats.

When Discord and the Smooze first appear at the Gala, Twilight Sparkle worries that their presence will cause trouble, and she warns Discord to keep the Smooze under control. Throughout the evening, Discord tries to draw Fluttershy's attention away from her new friend Tree Hugger, ignoring the Smooze and the havoc he creates around the Gala ballroom. On two occasions, Discord tries to isolate the Smooze from the party so that he can focus on Fluttershy. In the first of these instances, the Smooze eats all the jewels on Rarity's dress. In the second instance, he consumes an entire room of treasures and valuables, causing him to grow to immense size and cover the Gala floor in slime. Twilight and Princess Celestia attempt to use their magic against the Smooze to no avail. Tree Hugger suggests that the Smooze needs "calming auditory therapy", and manages to make him withdraw himself. Discord then extracts the valuables from the Smooze's body which returns him to normal size. In the end, Discord apologizes to the Smooze for ignoring him all evening, and the Smooze forgives him. His last scene in the episode has him dancing with Pinkie Pie.

In What About Discord?, the Smooze appears shrunken in a jar hanging from Discord's neck.

In A Royal Problem, he appears having a pillow fight with Discord at the Golden Oak Library's bedroom in a dream bubble as Princess Celestia views the dreams of everyone in Equestria.

In Between Dark and Dawn, the Smooze appears alongside Discord during Lotta Little Things.

The Smooze is mentioned in a letter from Celestia to Discord in Discord and the Ponyville Players Dramarama. He is also mentioned by Rainbow Dash in Princess Luna and the Festival of the Winter Moon.

The Smooze appears in episode 1 of Rarity's Peek Behind the Boutique, "Fashion Do's and Don'ts".

THE SMOOZE is a glowing, green slime creature and one of Discord's pals. When he's not causing ponies to gasp in fright, he's gobbling jewels and leaving an icky trail of slime wherever he goes.

My Little Pony: The Manga - A Day in the Life of Equestria

In chapter three of Vol. 1, the Smooze arrives at Carousel Boutique to be fitted for a new outfit. After enduring various mishaps due to the Smooze's slimy nature, Rarity succeeds, and Discord thanks her by creating a new boutique for her in Chaosville.

An Enterplay collectible card game Absolute Discord digital card of The Smooze lists his name with a trademark symbol.[1] 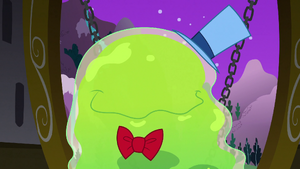 Retrieved from "https://mlp.fandom.com/wiki/The_Smooze?oldid=2140140"
Community content is available under CC-BY-SA unless otherwise noted.