The Summer Sun Setback is the seventeenth episode of season nine of My Little Pony Friendship is Magic and the show's two hundred and thirteenth episode overall.[1]

This episode was released on Youku's on-demand service in China[2] on July 12, 2019, forty-three days ahead of its scheduled premiere on Discovery Family.

The episode begins at Grogar's lair, where Grogar explains to Cozy Glow that because she, Chrysalis, and Tirek failed to retrieve his Bewitching Bell from the top of Mt. Everhoof, they must seek out an alternate source of power to destroy Twilight Sparkle and her friends. As Grogar leaves, Cozy, Chrysalis, and Tirek try to figure out how to use the Bewitching Bell, which they secretly did succeed in retrieving, against him.

When they are unable to activate the Bell, Cozy Glow mentions the restricted area of the Canterlot Archives that Twilight once told her about and suggests looking there for information.

In Canterlot, Twilight is hard at work planning the upcoming Summer Sun Celebration, having learned from recent experiences to delegate her responsibilities and not get stressed out. Princess Celestia and Princess Luna enter and inform her that this might be the last Summer Sun Celebration to be held before they step down from the thrones and hand things over to Twilight and her friends.

When Twilight relays this information to her friends, they fear she will start stressing out like she always does, but she is surprisingly calm and wants to make this last Summer Sun Celebration special. With Discord's arrival, Twilight gives each of her friends one last task to take care of before the Celebration preparations are complete.

Meanwhile, Cozy Glow, Chrysalis, and Tirek sneak into Canterlot under the cover of night and try to infiltrate the Archives. But they have difficulty doing so due to Shining Armor's new security measures around the castle as well as the presence of the Mane Six, Spike, and Discord. Luckily, Chrysalis comes up with an idea and explains it to her fellow villains.

Following Twilight's instructions, Applejack and Pinkie Pie oversee adjustments to the Celebration catering provided by Braeburn and the Earth ponies of Appleloosa. Tirek, hiding in the bushes nearby, absorbs the magic of a few ponies, causing them to become severely weak. Braeburn, whose magic is also drained, believes it to be the result of contaminated food and warns everyone not to eat any until they figure out what is going on. As the ponies evacuate the area, Tirek steals some of the food.

Lastly, Rarity and Spike meet with the unicorn team in charge of the ceremony's fireworks display, led by Fire Flare, to communicate Twilight's new vision for the fireworks show. When Rarity and Spike leave, Chrysalis disguises herself as a pony named Crackle Cosette and convinces the troupe that unicorns are superior to Earth ponies and Pegasi and that fireworks shows are a waste of their magical talent.

Anything that can go wrong...

Back in the castle, Twilight thanks her friends for their help in organizing the Summer Sun Celebration. Celestia and Luna, remembering that Twilight had difficulty raising the sun and moon once before, offer to help her practice using the amulet imbued with their magic. Just as Twilight leaves the room with Celestia and Luna, Braeburn appears to inform Twilight's friends that some of the catered food has gone missing and the Earth ponies are too weak to make more.

Then, a royal guard appears and alerts them about sudden hazardous weather patterns. Finally, Fire Flare and her unicorn troupe appear and quit the fireworks show, believing unicorns are too good for such trivial performances. As a result of Tirek, Cozy, and Chrysalis' schemes, the Summer Sun Celebration preparations devolve into complete chaos. In order to keep Twilight from getting stressed out, her friends decide to try and fix everything before the Celebration begins.

Applejack and Pinkie Pie tend to the weak Earth ponies, but they determine that the food is not the cause of their sudden sickness. Rainbow Dash and the Wonderbolts race to get the hazardous weather under control, and Rarity and Spike try to convince Fire Flare and her team to put on the fireworks show. Meanwhile, Cozy Glow, Tirek, and Chrysalis take advantage of the chaos to incapacitate a royal guard, infiltrate the castle, sneak past the patrol of geese, and break into the Archives.

Despite her friends' efforts to keep it a secret from her, Twilight eventually discovers the chaotic state of the ceremony preparations. Much to her friends' surprise, Twilight remains perfectly calm and takes charge of the effort to fix everything, with the addition of Celestia and Luna's help. Together, they nurse the weak Earth ponies back to health, clear the sky of hazardous weather conditions, and convince the unicorns to perform.

In the end, the Summer Sun Celebration is a huge success. In recognition of how much Celestia and Luna have done for Equestria, Twilight announces a brand new holiday to replace the Summer Sun Celebration: the "Festival of the Two Sisters". Twilight's friends apologize for not telling her about the preparations going wrong, and they are proud of her for getting over her tendency to freak out.

Meanwhile, Cozy Glow, Tirek, and Chrysalis steal a book from the Canterlot Archives. When they return to Grogar's lair, Grogar reveals that he has successfully found a new source of power to defeat Twilight and her friends with and plans to set out the next day to claim it. With the book they stole from the Archives, Cozy, Tirek, and Chrysalis resolve to unlock the power of the Bewitching Bell, and Cozy remarks how easy it was to get the Earth ponies, unicorns, and Pegasi at the Summer Sun Celebration to turn on each other.

"Now that is something to think about..."
— Queen Chrysalis

Princess Celestia: Sorry to interrupt. We know you're busy planning the Summer Sun Celebration as we requested. But...
Princess Luna: Oh! Things seem, uh, calmer than we would've expected.
Spike: No complaints here.

Discord: If this is the last Summer Sun Situation, I simply can't miss it. Well, I see I've arrived just in time for the "Twilight gives her friends an impossibly long and overly detailed list" predicament.
Twilight Sparkle: I guess some draconequus isn't the know-it-all he thinks he is.
Rainbow Dash: This is it?
Twilight Sparkle: What?
Rainbow Dash: We were kinda with Discord on this one.
Twilight Sparkle: No more crazy lists. No more freaking out. With your help, I know we've got this.
Discord: [groans] Character growth is so boring.

Lord Tirek: Why are so many ponies up in the middle of the night?
Cozy Glow: It's that silly sun holiday.
Queen Chrysalis: How many holidays do you ponies have?

Applejack: Pinkie, you and I are givin' Braeburn and the Appleloosan ponies some adjustments to the menu.
Rainbow Dash: Fluttershy and I are meeting the Pegasi from Cloudsdale to give them changes to the weather.
Rarity: Spike, we're going to update the Flaming Sky Firework Unicorn Troupe with Twilight's new vision.
Discord: And I'm supposed to... "make sure Discord doesn't do anything 'Discord-y'"? Well, that's annoyingly specific!

Discord: I suppose I could fix everything. But isn't the real miracle here the miracle of teamwork and character growth?
Rainbow Dash: OH, COME ON!

Rarity: Nopony understands wanting to take pride in your work more than I do!
Unicorn 1: You could do more with your magic than make frilly dresses!
Rarity: Oh, pffft. Nopony makes frills anymore. This season's actually all about simplicity—
Spike: Not the point, Rarity!

Twilight Sparkle: Applejack, what is going on?
Applejack: I told y'all this was a bad idea! But nopony ever listens to me!

Twilight Sparkle: I know how I used to react, but I really have changed. Panicking won't solve anything. But we can handle whatever problems come our way as long as we handle them together!
Princess Celestia: Spoken like a true leader.

Twilight Sparkle: [amplified] This Celebration has always been a reminder not to fear the night, for there is always a new day to look forward to. But as we look towards Equestria's future, I am sad to say today will be the last Summer Sun Celebration.
[crowd gasps]
Twilight Sparkle: Because there is something even more important to celebrate. There are two ponies who have watched over us night and day for as long as we can remember. We will no longer commemorate their battle or their reunion. Instead, we will take this day to celebrate how much they mean to all of us. From this day forward, today will be known as the Festival of the Two Sisters!

Lord Tirek: Hmph!
Queen Chrysalis: Oh, stop pouting.
Cozy Glow: You knew you couldn't stay that buff. You had to return all the life force to those Earth ponies so Grogar doesn't suspect anything.
Lord Tirek: I don't have to like it.
Cozy Glow: Well, I don't like that we worked so hard to destroy their party and they still pulled it off. But you don't see me complaining!

Cozy Glow: You know, it really was super easy to get all those Earth ponies and Pegasi and unicorns to turn on each other.
Queen Chrysalis: It was, wasn't it? Now that is something to think about... 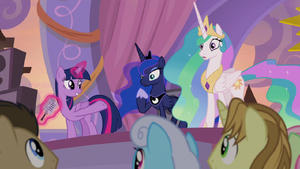