The Super Speedy Cider Squeezy 6000 is the fifteenth episode of the second season of My Little Pony Friendship is Magic and the forty-first episode overall. In this episode, the Flim Flam brothers challenge the Apple family to a cider-making competition. The story is a homage to John Henry vs. the Steam Drill, an old fable about manpower beating machine.

According to Steffan Andrews, who orchestrated The Flim Flam Brothers,[3] "Cider Horse Rules" was a working title for this episode.[4] This episode did not originally have a friendship report, and M.A. Larson was surprised that the "lesson" he wrote was approved.[5]

Hasbro produced a toy of the Super Speedy Cider Squeezy 6000 machine, which includes a figure of Flim.

The episode opens with a shot of Fluttershy sleeping. She is soon awoken by Rainbow Dash, who drags her to Sweet Apple Acres in order to be there early for the opening day of cider season. Dash complains that Pinkie Pie is always first in line and always buys an unfairly large amount of cider. She says that this time she intends to beat Pinkie to the head of the line by lining up before dawn. As they arrive, however, they see a massive queue of ponies camping out to get cider and Dash worries that there won't be enough for her. They meet up with Pinkie Pie, who is once again first in line. She says that she "had this brilliant idea to come down here and camp out," and she, "told a few others about it and they all thought it was a great idea too."

Applejack then announces that cider season is open and Apple Bloom begins to serve draught apple cider to ponies individually as they come down the queue, while Granny Smith receives payment. Pinkie Pie buys not just one mug of cider but a whole trays' worth. As the serving goes on, the barrels of cider left for Big McIntosh to tap decrease, and Fluttershy, who is just one place in front of Rainbow Dash, gets the last mug of cider for the day. Extremely upset by this, Rainbow Dash and the other ponies who didn't get cider begin to complain. Applejack explains that there will be more cider tomorrow, and that while they always manage to improve production every year, the family recipe is made with love and care and can't be rushed. The crowd, however, is still angry and complains that the Apples always run out of cider before everyone is served.

The brothers come into town

Amidst the chaos, the Flim Flam brothers arrive in their large vehicle, which they later reveal to be named the "Super Speedy Cider Squeezy 6000." They kick off a long musical number as soon as they arrive, and sing about their production of cider. Managing to entice the entire crowd into joining in their song, they quickly make themselves popular.

"Right here in this heaving, roiling, cider-press-boiling guts of the very machine, those apples plucked fresh are right now as we speak being turned into grade-A, top-notch, five-star, blow-your-horseshoes-off, one-of-a-kind cider!"
— Flim

They use this popularity to their advantage. With Ponyville's citizens faced with the dilemma of a limited quantity of manually pressed cider, they turn to the Flim Flam brothers and their automated cider production. Upset by the arrival of the Flim Flam brothers and the threat of automated production running them out of business, the Apple family tells them that their hoofmade cider will never be outshone by anything automatic.

The twin brothers attempt to broker a deal with the Apple family, who will supply them with their delicious apples, and they will sell the cider under the Flim Flam brothers name. They call for a 75-25 split in profits in their favor. Applejack reminds the others that their cider profits keep the family business afloat during the winter months; if they were to accept, they would lose the farm. The Apple family declines the offer, which prompts Flim to state that if the Apple family refuses to partner up with the brothers, they will run the family out of business and out of Ponyville.

Running out of cider again

The next day, cider season is in full kick again. The Flim Flam brothers once again arrive after the cider has run out and attempt to sell their own cider. However, Applejack lassos a barrel of their cider away, saying they can't sell cider made from Apple family apples. Rainbow Dash, about to drink her glass of cider, has it knocked away by the barrel. She ends up eating the dirt it spills over into. Hearing Applejack say that the Flim Flam brothers can't sell their cider, Rainbow asks if Applejack is playing a "cruel joke" on her.

With the Apple family confident that their hoof-made cider will always be better than the Flim Flam brothers' automatically produced cider, the Flim Flam brothers challenge them to a duel of who can produce the most barrels of cider in one hour. Reluctant at first, Granny Smith tells them they won't compete. However, after being called chicken, she agrees to a competition.

The two parties meet up at Sweet Apple Acres. The Mayor and Dr. Hooves kick off the competition, and the two teams begin their work. For the Flim Flam brothers, it's as easy as pressing a button. However, the Apple family immediately gets into the task, with Applejack bucking trees, Apple Bloom collecting the apples, Granny Smith sorting them, and Big McIntosh running the treadmill press and casking the cider.

Inevitably, the Flim Flam brothers' automated production line far outpaces the manual production of the Apple Family by three barrels to one. Fortunately, Applejack's friends arrive, naming themselves honorary family members and asking the mayor if they can participate in the event. Mayor asks the Flim Flam brothers if they care, and after they say they don't since they'll win anyway, she lets Applejack's friends participate.

"I think I'd love to have the rest of my family helpin' out."
— Applejack

Twilight Sparkle assigns her friends their tasks. Fluttershy helps Applejack with picking by zipping among the branches and shaking the entire crown, while the acrobatic Pinkie Pie helps Apple Bloom with collection. With her eye for detail, Rarity helps Granny Smith with sorting. Rainbow Dash uses her energy and stamina alongside Big McIntosh to power the press, and Twilight takes over for Big Mac with casking. With the added help, Apple Family cider production begins to increase: as she casks and stacks with her telekinesis, Twilight calculates they're helping to make five barrels in the same time the Apples were making one by themselves. Noticing the massive increase in production from the Apple Family, the Flim Flam brothers override their automatic apple quality control, and increase the power of the apple vacuum. This leads to whole trees being taken in which results in stalks, branches, rotten apples, and even rocks making their way into their cider.

At the end of the hour, the Flim Flam brothers have won due to their larger amount of cider produced. This makes the large audience of Ponyville residents, as well as the Apple family and honorary family members, visibly upset. But Applejack stays true to her word and tells the Flim Flam brothers that they won fair and square, and they set off to move away from Sweet Apple Acres.

The Flim Flam brothers begin their sale of cider. They dish out their first few mugs of cider which are unfortunately laced with branches, leaves, rocks and rotten apples, and in return get it spat back at them. The angry crowd of Ponyville's residents say that they refuse to pay for the Flim Flam brothers' low quality cider, and without a second thought, the two brothers make a quick escape from Ponyville. This allows Applejack to begin selling the family's cider again, and because she, her friends and her family have made so many barrels, they have enough for everyone in Ponyville.

"I didn't learn anythin'! Ha! I was right all along!"
— Applejack

Applejack begins to send a letter to Princess Celestia about what she had learned, but she cuts it off after saying she didn't learn anything and was right after all: "If you take your time to do things the right way, your work will speak for itself." She adds that she could say she's learned that her friends will always back her up in a crisis but that she already knew that, too. Rainbow Dash attempts to get cider, but they run out again, causing her to nearly burst into tears. Pinkie Pie offers her a mug, and the Mane Six raise their mugs in cheers.

Fluttershy: [yawns] Who could that be? It's still dark.
Rainbow Dash: Come on, Fluttershy! Cider season's about to start!
Fluttershy: Where are we? What's the rush?
Rainbow Dash: 'The rush'? Don't you remember what happened last year? Or the year before that? Or pretty much any cider season ever?
Fluttershy: Oh, well...
Rainbow Dash: Pinkie Pie! She always ends up ahead of us in line, and then they always run out of cider!
Fluttershy: I guess I...
Rainbow Dash: Well, not this year! This year, I'm gonna get there before sunrise, so I can drink all the cider I want, and laugh when she doesn't get any! It's the perfect plan! You know, I might even buy some cider and hold onto it for awhile, drinking it drop by drop in front of her. Aaaaaaaah!
Fluttershy: Gee, Rainbow Dash, looks like a few other ponies had the same idea.
Pinkie Pie: [exits from her tent, while balloons float out of it]
Fluttershy: Oh gosh, Pinkie! I love your new style!
Rainbow Dash: Who are all these ponies?
Pinkie Pie: Isn't this great? I couldn't sleep last night 'cause I was so excited about cider season, and I had this brilliant idea to come down here and camp out, so I told a few others about it and they all thought it was a great idea too and now it's just a big old cider party! Woo hoo! Oh gosh, that's a lot of ponies. Hope they don't run out before you get any.
Rainbow Dash: [growls]

Pinkie Pie: She's right you know! You can't rush perfection, and this year's batch was perfection!
Fluttershy: Erm, Pinkie Pie...
Pinkie Pie: I'll never forget the cider I just drank. It was a moment in time, that will never exist again.

Applejack: Cider sales keep our business afloat through the winter. We'd lose Sweet Apple Acres if we agreed to this!
Flim and Flam: So? What'll it be?
Big McIntosh: No deal.

Rainbow Dash: Is this some kind of cruel joke?

Flim: What's the matter, Granny Smith? Chicken?
Granny Smith: What did you call me, sonny?

Flam: Drink up, Ponyville! Down the hatch!
Ponies: [spitting] [grunting]
Cherry Berry: I can't get the taste off my tongue!
Sweetie Drops: Mine's got rocks in it.
Comet Tail: I wouldn't pay one cent for this dreck!

Applejack: Dear Princess Celestia. I wanted to share my thoughts with you. [clears throat] I didn't learn anythin'! Ha! I was right all along! 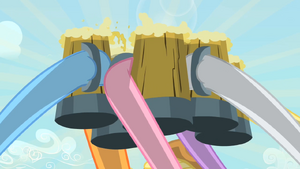