The Ticket Master is the third episode of the first season of My Little Pony Friendship is Magic. Princess Celestia gives Twilight Sparkle two tickets to the Grand Galloping Gala. However, all of Twilight’s friends want to attend the gala.

Lauren Faust's original version of this episode was 11 minutes long before it went into production under Hasbro. Amy Keating Rogers later helped Faust flesh it out to 22 minutes, which is why both Rogers and Faust receive writing credit.[2] In the first My MLP season 1 scenes video, Big McIntosh reacts happily to the new plow and plows the field in Applejack's gala fantasy. Rogers said that the scene was in the storyboard, but not the script.[3] Mr. Greenhooves was to appear in the episode.[4]

This episode appears in a DVD distributed by Hasbro in multiple countries. Consequently, many of the show's language dubs were introduced via The Ticket Master, instead of the first episode. Clips from this episode were also recycled and used out of context in the iOS app Twilight Sparkle: Teacher for a Day and its Ruckus Reader version Twilight Sparkle's Special Lesson. The clips used were the scene where Spike burps out the letter from Princess Celestia from the start of the episode, part of Rainbow Dash's Imagine Spot where she joins the Wonderbolts and flies with them (with Rainbow Dash airbrushed out of the clip), and the ending where Twilight returns the tickets.

Twilight Sparkle and Spike are helping Applejack harvest apples when Twilight receives a letter from Princess Celestia containing two tickets to the Grand Galloping Gala. Applejack says that if she goes to the gala, she will open an apple stand and earn money for her family. Suddenly Rainbow Dash crash-lands and asks about the tickets. She tells Twilight she hopes to perform flying stunts at the gala to impress the Wonderbolts and, hopefully, be asked to join their troupe. Applejack and Rainbow Dash argue about the spare ticket until Twilight says she will think about it during lunch.

Twilight comes across Pinkie Pie, Rarity, and Fluttershy, who also want to attend the gala. Pinkie sings a song about playing games and partying at the gala. Rarity dreams about meeting Princess Celestia's nephew and falling in love with him. Fluttershy wants to visit the castle’s gated garden and befriend the exotic animals who live there.

When Twilight and Spike are eating lunch, they notice the other ponies go inside, while the waiter asks Twilight if she's going to eat in the rain, but she doesn't notice the rain until she sees that Rainbow Dash left a hole in a rain cloud to keep Twilight dry. Twilight tells her not to do favors in order to get the spare ticket. Rainbow Dash closes the hole and the rain drenches Twilight and Spike, ruining their lunch. Rarity passes by and invites them to Carousel Boutique where Rarity gives both of them makeovers. When Twilight realizes that she's doing it for the ticket she states that "she will have to wait for her decision like everyone else." Afterwards, Applejack offers desserts to Twilight, but she declines. When she goes back to the library, she finds Fluttershy and her animal friends doing spring cleaning. When Twilight asks Fluttershy to leave, Pinkie pulls Twilight out and sings The Ticket Song. Pinkie inadvertently informs the whole town about the extra ticket to the gala. A crowd of excited ponies try to do favors for Twilight, and she escapes by teleporting herself and Spike back to the library.

Back in the library

Twilight discovers her friends already waiting in the library and breaks down, telling them she doesn't want to disappoint anyone. The five friends apologize and say they don't want to go to the Gala anymore. Twilight writes a friendship report to Princess Celestia and decides to return both tickets because she'd rather not go than leave out any of her friends. Princess Celestia sends back six tickets, saying Twilight should have just asked for more. Twilight's stomach starts rumbling and the others invite her to dinner. As the ponies get their tickets, Spike becomes upset that he doesn't get a ticket, but Princess Celestia soon sends a seventh ticket for him. Spike goes outside with the ticket giggling, but he stops as soon as he sees Applejack grinning at him. He immediately pretends he is disgusted that he has to go, but soon runs off giggling as Applejack follows along.

Twilight Sparkle: [to her friends] Quiet!
Pinkie Pie: And then I said "Oatmeal? Are you craz–"

Spike: Do you have any rubies? ...No? OK. I'll have the hay fries. Extra crispy!

Rarity: We will be the belles of ball, you and I. Everyone will be clamoring for our attention. All eyes will be on us! And then everyone will finally know the most beautiful, most talented, the most sophisticated pony in all Equestria is Rarity the unicorn! ... And Twilight Sparkle, of course.

Random pony: I'll do your taxes!

Twilight Sparkle: If my friends can't all go, I don't wanna go either. 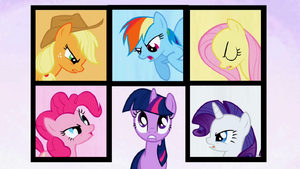