Twilight helping Applejack with the farm.

A happy Applejack with a bucket of apples.

Applejack pleased that Twilight is lending a helping hoof.

...but not good enough to eat.

Heh, this apple can go in the trash.

Out you go, bad apple.

Does Twilight have an apple on her horn?

An apple hits Twilight on her head.

Spike, you've been on my back all morning.

Or, what about this one?

Spike looking through the basket of apples.

...that was eaten by a hungry little dragon.

Look what I got.

"Her Grand Royal Highness, Princess Celestia of Equestria, is pleased to announce The Grand Galloping Gala..."

"...to be held in the magnificent capital city of Canterlot..."

"--cordially extends an invitation to Twilight Sparkle plus one guest."

Thus, the Gala excitement commences!
Add a photo to this gallery

I've got a Golden Ticket!

Spike's not into girly parties and stuff.

Daydreaming about the Gala.

Just imagine all the bits!

She'll make a mint there, right?

Hey guys, did I hear right?!

"What were you busy doing? Spying?"

"I just happened to hear that you have an extra ticket?"

"The ponies will love my awesome moves."

Huh? What was that?

The ponies, watching in awe.

"I would draw their attention with my..."

I see Derpy. And Amethyst Star.

"Then, I would mesmerize them with my..."

The crowd of ponies.

A legend in her own mind.

RD getting accepted into the Wonderbolts (in her mind).

She'll get to hang out with the Wonderbolts, right?

Rainbow Dash flying alongside the Wonderbolts.

Sweetie Drops and Berryshine among others watch Dash with the Wonderbolts.

Is that a challenge?

"My family needs it more than you do!"

"I challenge you to a hoof-wrestle. Winner gets the ticket."

"Drummin' up business for the farm?"

"A chance to audition for the Wonderbolts?"

"Those are all pretty good reasons, aren't they?"

"Can't make a decision on an empty stomach."

She's going to give it to me!

Twilight's friends all want to go

At this point, Ellie Goulding's song Starry Eyed should come on.

"Oh the Grand Galloping Gala, is the best place for me!"

"...and pinwheels and piñatas and pincushions!"

Pin the tail on the Pinkie!

Pinkie, as silly as ever.

Time to turn on the charm.

Rarity, as beautiful as ever.

Rarity, entering in her lovely dress.

Why hello my dear.

YES! Of course, I'll marry you!

Rarity, in her fantasy about the Gala.

You don't want to marry him, trust me, I have stories about him that would turn your coat white...er.

Angel Bunny on a mission.

Ooh, are those tickets?

"Girls! I haven't decided though."

...Pinkie and Rarity looking at Fluttershy.

I love this fantasy!

So many happy moments.

Flying happily through the Gala..in her fantasy.

The critters will love her, right?

That is a cool Toucan.

Smile for the camera.

With a pink bird on her back, isn't that heavy?

Twilight doesn't know what to say.

Dashie standing on a part of a ceiling.

Applejack arrives at the scene.

This is my annoyed look.

This is a big problem.

Delta, requesting a juggernaut suit. I need protection from these fierce ponies.

Twilight is about to snap.

Five friends want tickets and only two tickets are available.

"Girls, there's no use in arguing."

"...and I'm gonna make it on my own, and I certainly can't think straight with all this noise..."

Spike, why are you leaving too?

Alone at last.
Add a photo to this gallery

Meeting up with Spike and Twilight at the cafe.

Remember, she's a pony, not a pony-shaped human.

Spike trying to keep Twilight in reality as always.

Apparently, she cares for AJ and 'Shy more.

That waiter has some waiting skills.

Savoir Fare leading a drenched Daisy inside the café.

Rainbow Dash smiling down at Twilight.

Twilight Sparkle is not impressed with Rainbow Dash.

This is my disapproving glare.

Arthur, Arthur, King of the Britons!

Rainbow Dash is a guardian angel from heaven.

Rainbow Dash looking down upon the world.

Ponies running desperately to get out of the rain.

Wet mane, before she could even eat.

Great, now I have the wet mane!

We are the best of friends, are we not?

Twilight Sparkle has a neck tumor. So that's why she doesn't cut her hair.

I do look quite pretty.

Do I look good?

Who needs him anyways?

"This is all about you, and how fabulous you'll look at The Grand Galloping Gala!"

Twilight is getting squished, while Rarity continues to dream about the Gala.

I got plenty of delicious food.

Aww! Look at her face!

The dessert, not my auntie.

What do you say there, best friend?

"...but we're all doing a little spring cleaning for you."

Time to party!
Add a photo to this gallery

Pinkie Pie and her friends throw Twilight up in the air.

Pinkie's got ponies with her.

Twilight's not liking this.

Twilight Sparkle is not amused.

"She'll give her extra ticket to the gala to me!"

The way to a woman's heart is through offering her carrots.

One of Twilight's disguises.

Golden Harvest stands on two hooves, pointing that Twilight's the other way.

Nopony would ever notice them.

The aforementioned five (and Derpy) watch as Twilight casts a spell...

Teleporting back to the Library.
Add a photo to this gallery

Twilight and Spike burned out and dizzy after being teleported.

A little warning would have been nice...

Twilight's friends begin to feel sorry for her.

Rainbow Dash, seems to have a worried expression.

Her mind is made up.

Now how are they able to carry the tickets in the air? What sorcery is this?

Applejack and Fluttershy heading out the door with their tickets.

Spike, waiting at the door with the tickets.

"How come I don't get a ticket to the Gala?"

I didn't forget you Spike, here's your ticket for good time's sake.

Aww...looks like Spike likes girly, fru-fru stuff after all.

Sweet laugh, Applejack. Oh yeah, and you forgot to lock the door. 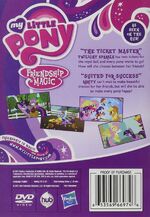 Add a photo to this gallery
Retrieved from "https://mlp.fandom.com/wiki/The_Ticket_Master/Gallery?oldid=2163069"
Community content is available under CC-BY-SA unless otherwise noted.