The Times They Are A Changeling

The Times They Are A Changeling is the sixteenth episode of season six of My Little Pony Friendship is Magic and the one hundred and thirty-third overall. The title might be a reference to the 1964 Bob Dylan album "The Times They are a-Changin'", basis of Enterplay collectible card game Marks in Time #102 C card Invasion of the Changelings flavor text "The times, they are a'changelin'."

In this episode, Twilight Sparkle, Starlight Glimmer, and Spike travel to the Crystal Empire and find the Crystal Ponies in a panic over the possibility of a changeling spy.

In production order, this is season six episode seventeen.

The baby changelings were designed by Kora Kosicka, Charmaine Verhagen, and Fernanda Ribeiro.[1]

In a nearby seat, Spike is in disguise and masking his voice. When asked why, he explains he does not want to attract attention from the Crystal Ponies because of his "brave and glorious" reputation.

An Empire in panic

Upon arrival to the Crystal Empire, Twilight, Starlight, and Spike find the train station and streets to be completely empty. As soon as Spike removes his disguise, Crystal Ponies appear to swarm him, cheering his name and pleading for him to save them once again. Twilight and Starlight ask what is going on, and the Crystal Ponies wonder to themselves if they are who they outwardly appear to be. When they begin to question if Spike is as he appears, they flee in terror.

Outside the palace, Twilight, Starlight, and Spike are stopped by royal guards—even Twilight's princess status and Spike's Empire reputation prevent them from getting through. When Princess Cadance, Shining Armor, and Sunburst enter, Cadance confirms Twilight's identity with their "Sunshine, Sunshine" dance.

Cadance, Shining Armor, and Sunburst explain that the Empire is in a state of panic because a changeling had recently been spotted. After the events of Cadance and Shining Armor's wedding, they are taking all necessary precautions, especially since changelings feed on love and the Empire is filled with more love than anywhere in Equestria ever since the Crystalling. Fearing for Flurry Heart's well-being, Twilight offers to help protect her.

Search for the changeling

Spike joins the royal guards' search for the changeling in the Arctic Wastes outside the Empire, and the guards defer to Spike's command. After splitting up the group to cover more ground, Spike stumbles into an underground cavern and nearly falls into a deep chasm. He is briefly startled by his own mirrored reflection, but his reflection turns out to be the changeling itself.

As Spike runs away from the changeling, he falls into the chasm, but the changeling saves him from plummeting to his doom. Spike is considerably confused by the changeling's act of charity. The changeling introduces himself as Thorax and says that, ever since he was first hatched, he has always been different from his fellow changelings. Having taken part in the invasion on Canterlot, Thorax wanted to share its love instead of steal it. Since then, he has lived on his own in search of friends with which to share love, but his basic changeling instincts prevent him from venturing out into public.

Having a reputation among the Crystal Ponies as a hero, Spike offers to speak to them on Thorax's behalf.

Spike returns to Shining Armor and the royal guards and says that he not only found the changeling but also befriended him. Unfortunately, the ponies are so disdainful toward changelings that they consider such a feat to be impossible and that Spike's ramblings are merely a joke.

"There's no such thing as a nice changeling."
— Shining Armor

Spike returns to Thorax's cave to give the bad news, but he comes up with another plan. He brings Thorax to the castle under the guise of an average Crystal Pony and introduces him to Twilight as his pen pal "Crystal Hoof". After a successful meet-and-greet with Princess Twilight, Spike takes "Crystal Hoof" out in public to mingle with other Crystal Ponies.

A short while later, Spike and Thorax return to the palace to meet with Princess Cadance and the others. As the disguised Thorax is openly welcomed, Cadance introduces him to Flurry Heart. However, the love coming from all around her causes Thorax to succumb to his basic changeling instincts, and he inadvertently drops his disguise.

The ponies immediately turn on Thorax, believing that he has taken "Crystal Hoof"'s place. Surrounded by so many angry ponies, Spike is unable to bring himself to stand up for his new friend. Thorax runs away in tears, and the royal guards give chase.

A Changeling Can Change

As Shining Armor and the royal guards search for Thorax, Spike looks for him in his cave. Thorax comes out of hiding and hisses at Spike, giving up hope that a changeling can ever have friends. Spike apologizes for not standing up for him, and Thorax forgives him since he is such a respected hero to the Crystal Ponies. With that, Spike sets out to make things right.

Back at the palace, the royal guards search frantically for Thorax, believing that there may be other changelings hiding nearby. Suddenly, Spike appears before the ponies alongside Thorax. Before they can take any action, Spike says Thorax is his friend and expresses through heartfelt song that changelings are just as capable of change as any other creature.

When the song ends, Twilight says she's proud of Spike for risking his celebrity status for a new friend. As the princess of friendship, she officially extends a warm hoof to Thorax, which he tearfully accepts. Having received the message of Spike's song, Cadance extends her hoof to Thorax as well on behalf of the Empire, and Shining Armor apologizes for not getting to know him and welcomes him as an official citizen.

As representative of the changelings, Thorax looks forward to learning all he can about friendship and bringing that knowledge back to the Changeling Kingdom so that changelings can learn to share love among themselves instead of stealing it from others. As the ponies cheer for Spike and Thorax, Starlight echoes Twilight's sentiment from the train: friendship lessons can happen anywhere.

Spike: [deep voice] "Spike?" Who's "Spike"?
Starlight Glimmer: Pfft. Uh, you're Spike, Spike. And why are you dressed like that?
Spike: [groans] [normal voice] Guys, you're blowing my cover!

"Amber Laurel": Oh, it sure looks like Princess Twilight and her pupil.
"Scarlet Heart": But how can we be sure?
"Golden Väs": We can't! Either one of them could be the... you know!

Princess Cadance: After Queen Chrysalis took my place at our wedding and invaded Canterlot with her army of minions, we're not taking any chances.
Sunburst: Changelings feed off of love. And ever since Flurry Heart's Crystalling, the Empire is filled with more love than anywhere in Equestria. It's possible they've come for the baby.

Spike: You... saved me?
Thorax: It's okay. I know you don't wanna be friends.
Spike: Wait! I don't understand. Changelings are supposed to be evil... right?
Thorax: Evil? Oh, not me. All I've ever wanted is a friend.

Twilight Sparkle: How do you know Spike?
Thorax: Oh, uh, Spike and I go way back.
Spike: To the Equestria Games! That's when we met. We've been pen pals ever since.
Twilight Sparkle: Pen pals? Spike! You could have been using my pen pal quill set! Why didn't you tell me?

Thorax: Why do you think I would help you? I'm an "evil changeling"!
Spike: Because you're my friend. I just wish I had been one to you.

Shining Armor: Spike! What are you doing?! Get away from that thing!
Spike: No! He's not a "thing"! His name is Thorax, and he's my friend!

Twilight Sparkle: As the Princess of Friendship, I try to set an example for all of Equestria. But today, it was Spike who taught me that a new friend can come from anywhere. I guess everypony still has things to learn about friendship. Even me! And if Spike says Thorax is his friend, then he's my friend too.
Thorax: Thank you. 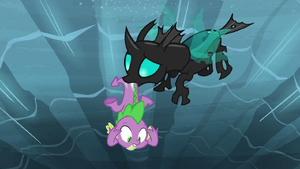 The Times They Are A Changeling image gallery