The Washouts is the twentieth episode of season eight of My Little Pony Friendship is Magic and the one hundred and eighty-ninth overall.

In this episode, Scootaloo becomes enamored with the Washouts, a touring group of stunt ponies, and Rainbow Dash is concerned for her safety and worries that Scootaloo's days as her number one fan are over.

According to supervising director Jim Miller, "There were a lot of technical challenges in [this episode]."[1]

This episode was released on France's TFOU MAX on-demand service on August 15, 2018,[2] twenty-four days ahead of its scheduled premiere on Discovery Family. It also aired on Boomerang in Australia on August 19, 2018[3] and on Nickelodeon in Denmark, Norway and Sweden on August 21, 2018.[4]

The episode begins at the Cutie Mark Crusaders' clubhouse, with Scootaloo calling a meeting of the Rainbow Dash Fan Club to order and Rainbow Dash herself spying on the meeting from outside. As soon as she calls the meeting to order, however, Scootaloo very quickly rushes through the meeting and dismisses the other club members from the clubhouse, much to Rainbow's confusion. Once alone in the clubhouse, she takes down all of the Rainbow Dash memorabilia and puts up new memorabilia in its place before calling to order the first meeting of the "Washouts Fan Club"—of which Scootaloo is currently the only member.

Having watched from outside, Rainbow Dash barges in and demands to know what's going on. Despite her attempts to hide her new fan obsession, Scootaloo admits that she is branching out into other fan clubs aside from Rainbow's. She explains that the Washouts are a new troupe of stuntponies that perform stunts far more extreme and dangerous than those performed by the Wonderbolts. Rainbow Dash is shocked and worried that Scootaloo no longer finds the Wonderbolts—and her by extension—interesting.

Later, Rainbow Dash tells the rest of the Mane Six about Scootaloo's new interest and worries that Scootaloo doesn't think she's cool anymore. In order to find out why Scootaloo is so obsessed with the Washouts, Pinkie Pie suggests that Rainbow Dash attend one of their shows, which they are holding in Ponyville that weekend.

The return of Lightning Dust

That weekend, Rainbow Dash, Scootaloo, and their friends go to the stadium where the Washouts' show is being held, with the seats almost completely packed, and Rainbow Dash makes no effort in hiding her bitterness toward this new stunt troupe. As the show begins, a loud announcer introduces the Washouts, and a trio of Pegasi appears in black and green flight suits. With flashy and fiery showmanship, the Washouts impress the crowd by flying through flames and electrically-charged hoops, shooting themselves out of cannons, and soaring through obstacle courses filled with spikes and saw blades. Even Rainbow Dash admits that she is very impressed.

At the end of the show, Rainbow Dash takes Scootaloo to meet the Washouts in person, including the thrill-seeking Rolling Thunder and the very short-tempered Short Fuse. When Rainbow introduces herself as one of the Wonderbolts, Rolling Thunder reveals that the Washouts themselves used to be cadets at the Wonderbolt Academy before they were kicked out, hence their team name. Just then, the Washouts' leader appears, and when she removes her helmet, she is revealed to be Rainbow's former lead pony Lightning Dust.

Despite Lightning Dust's bitterness toward Rainbow Dash over her dismissal from the Academy, she claims that her dismissal is what led to her founding the Washouts in the first place, and Scootaloo is greatly impressed with her death-defying stunts. Lightning Dust brags about the Washouts' recklessness and disregard for safety, and she disparages the Wonderbolts for their strict rules and regulations.

Lightning Dust mentions that there is an open spot on her team, and Scootaloo expresses great interest in joining, but Rainbow Dash forbids it, and Lightning Dust points out that she has to be kicked out of the Wonderbolts first in order to qualify. When Scootaloo considers joining the Wonderbolts just so she can immediately drop out, Rainbow takes her out of the stadium. She decides to show Scootaloo what the other Wonderbolts think about the Washouts.

Back to the Crusaders' clubhouse, Rainbow apologizes to Scootaloo for Spitfire's intense directness and says she is only looking out for Scootaloo's safety. However, Scootaloo is insulted that Rainbow Dash is trying to tell her what she can and cannot do. Rainbow Dash goes about getting rid of all of Scootaloo's Washouts merchandise and putting the merchandise of herself back up, but in the middle of this, she notices that Scootaloo has left.

As she flies into town searching for her, Rainbow runs into Twilight Sparkle, who has also become a fan of the Washouts after seeing their show. When asked if she knows where Scootaloo is, Twilight says Scootaloo has gone to see the Washouts practice. On their way to the Washouts' stadium, Rainbow expresses frustration that her attempts to deter Scootaloo from wanting to join the Washouts keep falling on deaf ears. Twilight tells Rainbow that she cannot control what Scootaloo does and can only be a good role model to her and hope she makes the right decisions.

However, Scootaloo still wants to impress others by doing stunts and tricks like the Washouts, and she refuses to listen to Rainbow Dash's attempts to change her mind. Remembering Twilight's words from earlier, Rainbow accepts that Scootaloo has to make and learn from her own decisions, and she watches with disappointment as Scootaloo leaves with her new team members.

Later that evening, the Washouts hold another stunt show in Ponyville for Scootaloo's official debut. For her debut as a stuntpony, Scootaloo plans to ride her rocket-propelled scooter down a steep hill and fly off a ramp over twenty-two burning wagons. As Lightning Dust flies Scootaloo to the top of the hill, Scootaloo mentions how much she admires Lightning Dust, to the point of starting the first Washouts fan club. When Scootaloo sees the untested rocket up close, she starts to have second thoughts about doing the stunt, but Lightning Dust pressures her to live up to the expectations of the president of Lightning's fan club.

The wagons for Scootaloo's stunt are set on fire, and Lightning Dust engages the scooter's rockets, causing Scootaloo to race down the hill at high speed. As she rockets up the ramp and into the air, a rope gets caught on one of the scooter's wheels. All of a sudden, Rainbow Dash appears, zooms past Lightning Dust, and saves Scootaloo from the out-of-control rocket scooter. When she brings Scootaloo back down to the ground, Lightning Dust expresses her great displeasure at Scootaloo for backing out of the stunt. Just then, the other end of the rope caught on the rocket scooter snags Lightning Dust's leg, and she proclaims her lifelong rivalry with Rainbow Dash as she gets dragged off into the sky.

Scootaloo apologizes to Rainbow Dash for not listening to her about Lightning Dust and the Washouts, and Rainbow Dash apologizes in return for not being a better role model and making Scootaloo feel like she'll never accomplish anything worthwhile. She proposes that the Washouts Fan Club be disbanded and a brand-new fan club be established instead. Some time later, in the Crusaders' clubhouse, Rainbow Dash calls to order the first meeting of the "Scootaloo Fan Club"—of which Rainbow is the founder and president and her parents Bow Hothoof and Windy Whistles are members.

"Rainbow Dash was right. Eavesdropping on your own fan club isn't weird at all."
— Scootaloo

Scootaloo: You eavesdrop on every meeting? That's weird.
Rainbow Dash: Well, sure it sounds weird when you say it out loud.

Rainbow Dash: Can you believe she actually said that?!
Pinkie Pie: Pfft, well, yeah! Eavesdropping on every meeting is kinda weird.

Announcer: Say it with me now, the Washouts' official motto...
Announcer and Crowd: Leap before you look!

Rolling Thunder: Name's Rolling Thunder. I got booted out of Wonderbolt Academy because of "flagrant disregard for hazardous weather". Pfft! If doing barrel rolls through nine hundred million volts of electricity in a raging thunderstorm is wrong, then I don't wanna be right.

Rainbow Dash: Lightning Dust! I should've known you were the brains behind a crazy idea like the Washouts! Or should I say, "lack of brains"!

Lightning Dust: Your "friend" got me kicked out of the Wonderbolts.
Scootaloo: Oh. That's, uh, less cool.
Lightning Dust: And it was the best thing that ever happened to me!

Spitfire: You know what happens when something goes wrong with the Crushinator Jaws of Smashalot?
Rainbow Dash: Patent pending?
Spitfire: You end up in a full body wing-and-hoof cast drinkin' through a straw!

Rainbow Dash: It's like the harder I try to convince Scoot they're dangerous, the more she likes them!
Twilight Sparkle: You can't control her actions. Only yours. Teach her what's safe and what isn't, like a good role model. Then hope she makes the right decisions.

Scootaloo: There's nothing you can do to stop me!
Rainbow Dash: You're right. You're your own foal, and you have to make your own decisions.
Scootaloo: Good! Because I already have!

Rainbow Dash: I know I was supposed to let you make your own decisions, but that doesn't mean I can't swoop in and save you from time to time.

Rainbow Dash: I've been lucky enough to have somepony who thinks I'm the coolest. But there's nothing cool about making you feel like you'll never be as awesome as me. 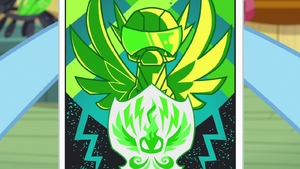