View source
watch 02:10
'My Little Pony' Lore: Thorax
Do you like this video?
Play Sound

Thorax is a male changeling and supporting character who appears briefly at the end of the season six episode The Crystalling - Part 2[1] before making his prominent debut in The Times They Are A Changeling. In the season six finale, he becomes the new leader of the changelings following the defeat of Queen Chrysalis.

In contrast to other changelings such as Kevin, Thorax has somewhat more whole ears and tail, slightly differently-colored eyes, and differently-colored back armor. Following his metamorphosis in To Where and Back Again - Part 2, Thorax is much taller and has a different color scheme—matching that of S06E26 Unnamed Changeling #3—and beetle-like mandibles protruding from his forehead.

In entomology, the term "thorax" refers to the midsection of an insect's body.

Prior to his introduction, Thorax appears briefly at a distance in the final shot of The Crystalling - Part 2, flying towards the Crystal Empire.

In The Times They Are A Changeling, Thorax appears pretending to be Spike's mirror reflection, but he is exposed when he does not copy Spike's exact movements. Spike is scared of Thorax at first, but he starts to warm up to him after Thorax saves him from falling into a deep crevice. Thorax explains that, unlike the other changelings, he wants to make friends, having desired so ever since he saw the Mane Six fight off the evil changelings during the royal wedding in Canterlot.

Thorax also explains that he was drawn to the Crystal Empire due to the love the Crystal Ponies had during Flurry Heart's Crystalling, but he has been unable to sustain himself off of that love because of what he is. Spike, sympathetic to Thorax's dilemma, decides to help him.

After Spike fails to convince the ponies of the idea that a changeling can be nice, he has Thorax disguise himself as a Crystal Pony—proportioned similarly to Plaid Stripes, "Pearly Whites", "Thunderstruck", filly Fluttershy, later filly Pear Butter, later filly Applejack, and later filly Derpy—named Crystal Hoof. With this disguise, Thorax is able to meet Princess Twilight Sparkle and mingle with the Empire populace. However, his cover is blown when he meets Flurry Heart and the love around her causes him to succumb to his basic instincts. In the confrontation that ensues, Spike briefly hesitates to stand up for Thorax, and Thorax runs off in tears, feeling betrayed.

When Spike returns to Thorax's cave and attempts to make amends, Thorax angrily turns him away at first, but he demonstrates his friendship by saving Spike from the crevice a second time. Spike brings Thorax before the ponies again and expresses through song that Thorax is good and that even changelings deserve a chance at friendship. Twilight, moved by Spike's courage and kindness, accepts Thorax as her friend, and the other ponies follow suit, welcoming Thorax as an official citizen of the Crystal Empire.

Thorax gratefully accepts the ponies' offer of friendship and expresses a desire to learn all he can about friendship and share what he learns with his fellow changelings so they can share love with each other instead of stealing it from others.

In To Where and Back Again - Part 1, Thorax teams up with Starlight Glimmer, Trixie, and Discord to save Equestria from changeling invasion. Here, his wings have become coated in crystal glitter. In Part 2, Thorax is forced to confront his doubts about returning to the kingdom where he was born, and he guides his allies into the Changeling Kingdom when the properties of Queen Chrysalis' throne disables their magic.

Near the end of the episode, it is revealed that Thorax's wings changed as a result of him sharing love with the Crystal Ponies. When Chrysalis tries to absorb that love from him, he follows Starlight's advice and shares it with her willingly, causing a blast of magic that metamorphoses him into a new colorful form. After Chrysalis is defeated and chased off, Thorax becomes the new leader of the changeling hive.

Thorax and the reformed changelings appear at Starlight's graduation ceremony in Celestial Advice. Twilight also considered sending Starlight to the Changeling Kingdom to help Thorax teach the changelings about friendship.

In Triple Threat, Spike accidentally invites both Thorax and Ember to Ponyville on the same day. During his visit, Thorax confides in Spike that he is dealing with a renegade group of changelings in his kingdom that refuses to adopt the hive's new ways. When he overhears Ember getting angry at Spike, Thorax transforms into a bear to defend him. After the misunderstanding is cleared up, Ember helps Thorax to be more assertive with his leadership, and in return, Thorax helps Ember to be sensitive to the feelings of her subjects and to be more open with her own feelings. In the end, he and Ember take part in a ceremony to unite changelings and dragons in friendship.

In To Change a Changeling, Thorax has used his new authoritative skills to persuade all of the renegade changelings to transform except for Pharynx, his older broodmate, who resents the changelings' new, peaceful lifestyle. Despite the other changelings' insistence that Pharynx be banished from the hive for his disruptive behavior, Thorax continually stands up for his brother, telling Starlight and Trixie that Pharynx would always stick up for him when they were younger. After Thorax and the other changelings help Pharynx fight off a maulwurf that threatens the hive, Thorax gets Pharynx to admit his love for the hive and convinces him to transform.

Thorax appears in the two-part season eight premiere School Daze representing the changeling Ocellus as she enrolls in the School of Friendship. During the school's Friends and Family Day, when Chancellor Neighsay insults the non-pony leaders of Equestria, Thorax pulls Ocellus out of the school. After Ocellus and the other students are found when they run away, the Mane Six convince Thorax to allow Ocellus to attend the school again.

In the holiday special My Little Pony Best Gift Ever, Thorax makes a brief cameo during The True Gift of Gifting celebrating Hearth's Warming with Pharynx, Ocellus, and several other changelings at the Changeling hive.

Thorax briefly appears in Uprooted reprimanding Ocellus for leaving the Changeling Kingdom without telling anyone, reminding her that a war nearly broke out the last time she did so. After the Young Six explain their mission of wanting to help the Tree of Harmony, Thorax allows Ocellus to see it through.

In The Ending of the End - Part 2, Thorax (alongside his brother and subjects) appears during the final battle against Queen Chrysalis, Lord Tirek, and Cozy Glow after being rallied by Ocellus. In The Last Problem, Thorax attends Twilight Sparkle's coronation ceremony. He also briefly appears in Twilight's group shot during The Magic of Friendship Grows.

In the My Little Pony: Friendship is Magic Issue #61-62 story arc Convocation of the Creatures!, King Thorax attends the Convocation of Creatures as representative of the changelings. In Issue #84, Ocellus briefly takes on his form during her school project.

In Beyond Equestria: Rainbow Dash Rights the Ship, Thorax appears in chapter 14 helping Daring Do and Brumby Cloverpatch repair their crashed airship.

Thorax appears in a photograph in episode 10 of Baby Flurry Heart's Heartfelt Scrapbook, "The Magic of Friendship".

Thorax appears in episode 2 of Fundamentals of Magic, "Magical Creatures".

In The Times They Are A Changeling, Thorax, unlike most of his kind, is demonstrably amiable and considerate with a sincere yearning for friendship. However, prior to meeting Spike, he bears much doubt that anyone could ever want to be friends with a changeling. When offered kindness or surrounded by love, Thorax occasionally reverts to his basic impulses and hisses threateningly at others.

In the two-part season six finale, Thorax is shown to panic when a situation turns dire, even to the point of hyperventilation, though he sticks with the rest of the rescue team despite his fears. He looks to Starlight Glimmer for leadership, and he demonstrates selflessness such that he puts on her appearance to spare her Chrysalis' wrath until she can destroy the queen's throne.

In Triple Threat, Thorax is shown to be excitable and curious, but at the same time, he struggles with the weight of his new leadership role, admitting to Spike that he has trouble asserting his authority. He is also very protective of Spike, transforming into a bear and challenging Ember when he believes she is threatening him. After the misunderstanding is cleared up, Ember helps him to be more assertive, which he demonstrates by calling Spike out on the lack of attention during his visit.

In To Change A Changeling, Thorax shows a strong sense of loyalty towards his brother, Pharynx, stemming from Pharynx always defending him from bullies when they were young. He is steadfast in his belief that there is good in Pharynx, refusing to banish him from the hive for his behavior, and pointing out to Pharynx that he still cares about the hive despite all the changes.

In School Daze, Thorax is displeased at Chancellor Neighsay's prejudiced attitude against non-ponies, but takes it better than the other leaders, acknowledging that not all ponies see the changelings as Twilight and her friends do. When the assembled leaders show concern about the missing students, Thorax is the only one who doesn't blame any of the others, instead worrying that the changelings won't be able to survive if a conflict breaks out between their respective species, and feeling hurt when Ember accuses him of hiding them. Upon a second encounter with Neighsay's bigotry, Thorax seems to share the displeasure of the other leaders and joins them in advancing on the unicorn, though Celestia convinces them not to become violent.

In Uprooted, he shows anger and disappointment at Ocellus for leaving the hive without telling anyone and attempts to bring her back before he is convinced to let her stay with her friends to honor the Tree of Harmony.

Beginning with The Maud Couple, Thorax was added to the opening intro flying out of the School of Friendship.

"The ice is pretty slippery. I wouldn't want you to get hurt because of me."
— The Times They Are A Changeling

"I'm Thorax. I can't believe you want to help me."
— The Times They Are A Changeling

"Why do you think I would help you? I'm an 'evil changeling'!"
— The Times They Are A Changeling

"I want to know all about friendship, and maybe one day I can take that knowledge back to the Changeling Kingdom! If my kind learned how to create love for one another, maybe they wouldn't have to take it from others!"
— The Times They Are A Changeling

"I'd hoped never to see that place again."
— To Where and Back Again - Part 1

"Nothing other than changeling magic works here. Chrysalis' throne is carved from an ancient dark stone that soaks up outside magic the same way changelings soak up love. It's how she keeps the hive safe."
— To Where and Back Again - Part 2

"Once I made a few friends, I guess I just sort of forgot about the whole feeding thing."
— To Where and Back Again - Part 2

"Hey! No one yells at my friend!"
— Triple Threat

"I may have forgotten to mention in my letters that maulwurfs have REALLY thick hides!"
— To Change a Changeling and My Little Pony (mobile game)

"I know you will make the changelings proud, Ocellus."
— School Daze - Part 2

"There you are! The hive has been worried sick! Why did you leave without telling us? The last time you and your friends did that, it almost brought our kingdoms to war!"
— To Ocellus, Uprooted

"I may have forgotten to mention that they're also resistant to some kinds of magic."
— Enterplay collectible card game Friends Forever #119 C card of Maulwurf 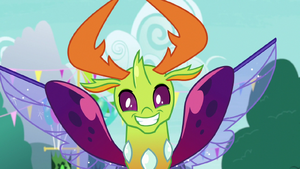