Three's A Crowd is the eleventh episode of the fourth season of My Little Pony Friendship is Magic and the seventy-sixth episode overall. In this episode, an ill Discord interrupts Twilight Sparkle's quality bonding time with Cadance. The title is a part of the proverb 'Two is company, three's a crowd,' meaning that a third person spoils the ideal combination of a couple.

On December 23, 2013, the original Hub Network press release erroneously listed this episode as one featuring "Weird Al" Yankovic in a guest voiceover appearance (he makes this appearance in the subsequent episode Pinkie Pride);[2] it was later corrected to fit this episode.[3] Hasbro Studios' vice president of development Michael Vogel later clarified both as being separate episodes.[4]

According to Ed Valentine, the first draft of the episode's script was finished in the fall of 2012.[7]

A clip of the opening scene with Twilight and Fluttershy was dubbed over by Andrea Libman and used to promote the series' season seven premiere on April 11, 2017.[8]

At the Golden Oak Library, Spike brings in the mail, only for Twilight Sparkle to immediately snatch it away. When she finds the letter she seeks—with the answer she'd wanted—she jumps for joy. Spike takes Twilight's excitement, as she's flying in circles, to mean that Princess Cadance is coming to visit.

As Twilight rejoices over being able to spend quality time with her sister-in-law, Fluttershy arrives with some news of her own: she's been granted permission to observe a species of rare, magical creatures called the Breezies. Just then, Pinkie Pie also arrives with some mail she's received herself: a flyer for a one-day sale on used patio furniture.

A princess and a draconequus

At the train station, Fluttershy's friends see her off as she leaves on her trip. As she departs, Twilight is nervous about Cadance's visit, as their previous times together had been under stressful conditions. Luckily, the day of her visit falls on the same day that the Star Swirl the Bearded Traveling Museum comes to Ponyville, and Twilight looks forward to spending the whole day with Cadance there without interruption.

Moments later, the Crystal Empire train arrives, and a royal guard escort including Flash Sentry heralds Princess Cadance's arrival. Twilight's friends ensure her that they won't let anything interfere with her time with Cadance. As the princess sisters-in-law walk away, the other ponies see a strange spinning object falling from the sky. It lands in a tree and sneezes the leaves on fire, revealing Discord—blue and sneezing. Claiming sickness and with Fluttershy away, he asks the other ponies to take care of him. Rainbow Dash is quick to flee the scene, and Discord distracts Pinkie Pie with a balloon, leaving it to Applejack and Rarity to care for the ill draconequus.

Applejack and Rarity resolve to keep whatever Discord's scheme is away from Twilight and Cadance, but due to the contagiousness of Discord's disease, they are quickly incapacitated. With a wicked grin, Discord turns to someone else to care for him.

At the Star Swirl museum, Twilight (in her Star Swirl costume) and Cadance enjoy the exhibits before the sick Discord appears before them. He tells them that he's come down with "blue flu" and has already given it to Applejack and Rarity. Before he can infect them with it as well, Cadance projects a magic health bubble around herself and Twilight. Discord asks Twilight to take care of him, but Twilight isn't very eager to. When Discord takes offense to this, accusing Twilight of not being his friend, Twilight grudgingly complies.

Twilight and Cadance put Discord to bed in the library. Just before they can return to the museum, Discord asks them to bring him something. However, what starts as a simple request for a tiny glass of water turns into an increasingly outrageous series of requests.

As Twilight's patience wears thin, she looks through her books for a cure. Discord tells the two princesses of a flower that grows on a hill at the very edge of Equestria, a brew from which cures blue flu. When Twilight asks where the flower is exactly, Discord offers to show them the way himself, but his being sick would require some arrangements.

At the edge of Equestria

Twilight and Cadance pull Discord on a giant golden chariot, and Cadance admits to being a little out of practice when it comes to flying. When they finally reach their destination, Twilight apologizes to Cadance for their situation. The two climb to the top of a hill and discover that the flower Discord mentioned is towering in size. When they pull it from the ground, a Tatzlwurm emerges from underground and attacks them. They blast the creature with their unicorn magic, drive it back underground, and seal the hole it escaped from with rocks.

Twilight and Cadance return to Discord with the flower and find him perfectly healthy and dancing. Twilight becomes infuriated over the fact Discord faked being sick, but Discord explains that he thought Twilight wasn't really his friend—she always says she is but has never shown it. He tells Twilight his faking illness was a test of friendship, and the fact that she would travel to the ends of Equestria for his sake means she passed.

Discord wonders if his "test" put a damper on Twilight and Cadance's quality time. Cadance says it didn't, stating that life in the Crystal Empire has become predictable and that she enjoys a little excitement now and then.

Suddenly, the Tatzlwurm emerges from underground again and sneezes on the three. While the two princesses are protected by Cadance's bubble, the unprotected Discord turns green.

As Twilight records her friendship lesson in the journal, Fluttershy—having returned from her trip to see the Breezies—cares for Discord, who is now actually sick and quarantined inside a plastic bubble. Applejack and Rarity remark that he got what he deserved. When Discord asks for one more thing, Twilight responds with an exasperated "No!" Discord states he was simply going to ask for a teeny, tiny glass of water.

Twilight Sparkle: Cadance and I can spend the whole day looking at Star Swirl the Bearded artifacts!
Rarity: Sounds like a perfect, drama-free way to spend the day with Cadance.
Twilight Sparkle: Not counting the drama surrounding which of the bells from his cloak they've chosen to put on display! Spoiler alert: It's this one!

Rarity: Whatever it is...DUUUUUCK!!!
Pinkie Pie: Rarity, that doesn't look anything like a duck!

Applejack: What in tarnation are you doin' here? And why the jumpin' junebugs are ya blue?
Rarity: More like a shade of cerulean to be precise.

Discord: Could somebody find me a fainting couch?
[beat]
Rarity: What?

Princess Cadance: I thought you were in no condition to travel.

Twilight Sparkle: Doing okay there?
Princess Cadance: To be honest, I'm a little out of practice when it comes to flying.
Discord: Well, then lucky for you. We're here.

Discord: Well, I was in my thinking tree—that's where I do most of my really deep thinking—I was there, and I said to myself, I said, "Discord, your friend, Twilight, says that she's your pal, but she never writes, and she never pops in for a visit."
Twilight Sparkle: I don't even know where you li—

Discord: "Now that she's a princess, maybe she's decided that she's too good for you."
Twilight Sparkle: I have never considered myself t-
Discord: But how was I supposed to know for sure that I'm truly still friends with one of the most important ponies around?
Twilight Sparkle: I'm not more-
Discord: By seeing if you would go to the ends of Equestria for me, of course. Which you did, literally. Congratulations, Twilight, you passed my friendship test! 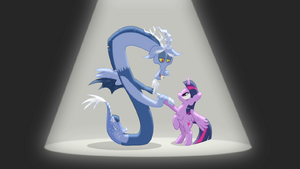