A letter from Cadance

Don't you hate it when she does that?

Who knew? Twilight can read without even looking at the paper!

"What are you doing Twilight?"

Is it just me, or does Princess Twilight get more adorkable with each episode?

She can come this weekend!

This is the best news ever!

Here's the letter I just got.

"It's not just fantastic."

Expressions Pinkie is accustomed to seeing.

The Master and her Apprentice.

What an awesome deal!

Oh, Pinkie.
Add a photo to this gallery

At the train station

The main six, at the train station.

Fluttershy in her travelling hat.

I miss her already...

Where'd that red balloon even come from?

Rarity likes the idea, though.

Is that who I think he is?

Princess Cadance, coming out of the lovely Crystal train.

Cadance likes to have fun with her sister-in-law.

Notice how this is the first time Twilight and Flash did not literally bump into each other.

Rarity and Twilight, sharing a hug.

I know that voice anywhere...

Kill it with fire!

"And why the jumpin' June bugs are you blue?"

"More like a shade of cerulean, to be precise." (In fact, he looks almost indigo.)

"Could somebody find me a fainting couch?"

Everyone looks expectantly at Rarity, of course.

Notice how that was the only sneeze that didn't do anything other than get RD wet with snot.

I think he's up to somethin' here.

I'm so weak I can barely lift a spoon...

Yeah right, and you expect us to believe you?

"I need some care!" (Can't lift a spoon, huh? Also, him unable to lift a spoon while ironically lifting a tree is pretty reminiscent of God from Abrahamic Religions creating a rock that he himself wouldn't be able to lift and still could thanks to being truly omnipotent.)

notice any resemblance? two bearded pseudo-ponies looking to the right, one a fedora and another with a pointed hat, both ancient masters of magic that precede Luna's imprisonment

I'll give you attention!

Thanks, but no thanks...

"Who keeps throwing away these perfectly good balloons?"

"That joker's up to something."

"I do wish that 'anything' had turned out to be something else!"

Was that loud, repetitive expositionary dialogue I was just conveniently overhearing?

Discord's not fooling Applejack or Rarity.

Oh no! Applejack and Rarity caught the Blue Flu!

I guess AJ and Rarity really blue up! Get it? "Blue" up, like they...exploded? (crickets chirp)

I hope you feel better soon!

Oh, whomever shall I turn to now?

Looks like Discord's up to something.
Add a photo to this gallery

Thought no one around here knew who he was…

It seems that Cadance is as much of a fan of Star Swirl the Bearded as Twilight is.

How much is that Discord in the window? You know, the one with the blue fur and scales.

"Nobody move! Dropped me brain."

"What are you doing here?"

Please, keep your germs away from my royal mane.

"I think you can manage."

Discord, get out of there!

You weren't using these bookmarks, were you?

"It's going to be fine." Does she know who she's talking about?

"A little glass of water, please…"

"…a fresh-pressed hankie, if I sneeze…"

"…whenever you can brew it."

"My goodness, I'm a nincompoop, because I fear I've got the croup…"

"…and scarves made out of…"

"…or something shiny of that ilk…"

"…and then I'll need some nice warm milk…"

"…and pastries from Abyssinia."

Discord. Your Derpy is showing.

The Leaning Tower of Cheeza.

It takes two to tango...

How did I get roped into this?

"Who's ready for my big reprise!" (What, every other song this season is doing reprises, so why can't I?)

What do crackers have to do with a little glass of water?

Wouldn't he rather have socks?

"Take tweezers out of my valise..."

"And then massage my knobby knees..."

"A cuddle with a Pekingese..."

A saddle ride on chimpanzees...

A circus that is built for fleas...

A Twilight doll for me to squeeze...

"And just because I oughta..."

Fun fact: drinking too much water can lead to water poisoning.

When you wish upon a draconequus...

You ain't never had a friend like Discord...and you probably shouldn't.

He's a maniac, maniac on the floor...

Good thing this dries up in a hurry.

"And that, as much as anything else, led to my drinking problem."

Does he really need to do that?

Fear and Loathing in Las Pegasus.

This cannot be good.
Add a photo to this gallery

"To be honest, I'm a little out of practice when it comes to flying."

What are we looking at?

Even for them, it's nightmare fuel.

If there was a Rahkshi big enough for that thing to fit in, we'd be doomed.

"Get your coils off my sister-in-law!"

Now its got Twilight!

Jaws III: 3 Jaws…Just when you thought it was safe to go to the edge of Equestria...

The princesses obviously don't agree with him!

"Turn off your computer, and make sure it powers down. Drop it in a 43-foot hole in the ground…"

"And just for good measures..."

"...Bury it completely, rocks and boulders should be fine. Then burn all the clothes you may have worn anytime you were onliiiiiiiiine."

Let's cover the hole with some rocks. That solves everything, right?"

You've got opportunity in this ve- oops wrong villain!

Just take those old records off the shelf.

Twilight gets all Rainbow Dash in Discord's face.

You don't write, you never visit...

Mentioning that Twilight literally went to the ends of Equestria for him.

Aww, a friendship charm that's half Discord, and half...

"Why the angry eyes?"

"You didn't put a damper on our visit at all."

"I enjoy a little excitment now and then!"

Sweet, sweet karma.
Add a photo to this gallery

A taste of his own medicine

Told you! If I was green, I would die!

You got what you deserved, jerk!

Can I drown him in the bubble, please?

Twilight sure is excited.

Dashie's not falling for Discord's "sickness". 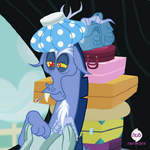