Thunderlane is a male Pegasus pony who first appears in the episode Hurricane Fluttershy. He has a dark gray coat, amber eyes and a blue-silver mane. His cutie mark is a storm cloud with a lightning bolt descending from it. He shares his design and eye color with Stormbreaker. He is Rumble's older brother.

Thunderlane[2] first appears in the film-reel scene in Hurricane Fluttershy: he coughs, and Rainbow Dash warns him that he better not be sick for the upcoming tornado that the Pegasi have to create. Twilight Sparkle blames him for coughing during the talk Rainbow Dash gives to the group of Pegasus ponies before they begin measuring their wingpower. She sprays him with disinfectant, and he protests that it was Blossomforth who coughed. Rainbow Dash claims that he is just trying to get out of the event because he is lazy, and orders him to be the first test flier. Thunderlane is annoyed at being first up and glares at Blossomforth. After positioning himself at the starting line, he blazes down the track with a look of determination and is recorded with 9.3 wingpower, receiving cheers from crowd and an adoring look from Cloudchaser. On the day of the tornado itself, Thunderlane is missing, and Rumble, his brother, tells Dash that Thunderlane is at the Ponyville hospital due to him having the feather flu.

Thunderlane later makes a minor appearance as a member of a crowd in A Canterlot Wedding - Part 2. He appears in the shot after Twilight Sparkle straightens the crest on Shining Armor's chest.

Thunderlane appears again in Wonderbolts Academy as one of the recruits for the Wonderbolts. He is paired up with Sunshower Raindrops and made the lead pony of their duo. When Lightning Dust's tornado puts Rainbow Dash's friends in danger, Thunderlane catches Rarity and gets a hug for his efforts.

Thunderlane appears in Rainbow Falls on the train with another speaking role, this time joined by Helia regarding the event they are participating in.

Thunderlane appears in the beginning of Inspiration Manifestation along with his brother Rumble at the Foal and Filly Fair.

Thunderlane appears along with Helia in Equestria Games.

Thunderlane appears at the beginning of The Cutie Map - Part 1 standing next to Rumble near the Castle of Friendship.

Thunderlane appears in Tanks for the Memories exiting the Cloudsdale cloud factory, going on his lunch break. In Slice of Life, he appears at the Ponyville bowling alley and at Cranky Doodle Donkey and Matilda's wedding.

In Do Princesses Dream of Magic Sheep?, Thunderlane briefly appears in Ponyville's shared dream. In The One Where Pinkie Pie Knows, he appears next to Blossomforth during a lakeside party. He appears in the crowd during Friends Are Always There For You in The Cutie Re-Mark - Part 2.

Thunderlane appears in A Hearth's Warming Tail and Top Bolt.

In Parental Glideance, Thunderlane appears in Rainbow Dash's flashback as a colt, and he appears in the academy locker rooms in a full Wonderbolt uniform. In Marks and Recreation, Thunderlane encourages his younger brother Rumble to attend the Cutie Mark Crusaders' day camp. He also helps the Crusaders teach Rumble that a cutie mark doesn't limit a pony to one particular talent or interest by showing him that he loves cooking even though he is now a Wonderbolt.

In The Beginning of the End - Part 2, Thunderlane and the other Wonderbolts are among those brainwashed by King Sombra into guarding Canterlot. In She's All Yak, he appears in the reused image of The Cutie Re-Mark - Part 2 during Fit Right In.

In The Ending of the End - Part 2, Thunderlane takes shelter with other Pegasi in Cloudsdale as the city closes itself off from the other pony races. In The Last Problem, Thunderlane briefly appears in Rainbow Dash's group shot during The Magic of Friendship Grows.

In the establishing shot of Ponyville in My Little Pony Equestria Girls: Rainbow Rocks, Thunderlane is one of the Pegasi flying over the town square.

In My Little Pony: Friendship is Magic Issue #81, Thunderlane brings Rumble to Wonderbolt Academy for Foals and Friends Weekend. After Rumble's wing is sprained during practice, Thunderlane insists that he stay grounded until the wing heals. During the performance, Thunderlane is surprised when Rumble joins them using a glider modeled after the one used by Wind Sock, the only Earth pony Wonderbolt.

In My Little Pony/Transformers Issue #2, Thunderlane appears in the audience of Pinkie Pie's baking show.

Where there's lightning speed, there's Thunderlane! With a wingpower of 9.3 and a steely focus, this pacy Pegasus never shys away from a challenge!

A Thunderlane miniature collectible is included in the Soaring Pegasus Set with Derpy and rainbowfied Fluttershy. Thunderlane appears on the Season 2 poster.

Thunderlane and Rumble along with Bulk Biceps are listed as being friends of Cloudchaser and Flitter on the Flitter & Cloudchaser card (number 17) of series 2 of Enterplay's trading cards. In the Crystal Games expansion set of Enterplay's collectible card game, card #31 C of Thunderlane gives him the description "Whether it's hurricane duty, Wonderbolt Academy tryouts, or the Equestria Games, Thunderlane's never one to back down from a challenge!", and card #65 U of Helia attributes to Thunderlane the quote "I once saw Helia fly five hours straight without taking a break or breaking a sweat. I knew she'd get gold at the Equestria Games!"

"It wasn't me, it was Blossomforth."
— Hurricane Fluttershy

"Too bad we can only compete in one event. [sighs] But, rules are rules."
— Rainbow Falls

"Wish I could stay and play, but it's time to fly."
— Marks and Recreation

"Ever since I became a Wonderbolt, Rumble's either watching me or trying to fly like me. He won't do anything else."
— Marks and Recreation

"I know I'm a Wonderbolt and my cutie mark is all about moving fast, but I really like to cook!"
— Marks and Recreation

"I once saw Helia fly five hours straight without taking a break or breaking a sweat. I knew she'd get gold at the Equestria Games!"
— Enterplay collectible card game The Crystal Games expansion set card #65 U of Helia

"YEAH! What she said!"
— The Wonderbolts Academy Handbook 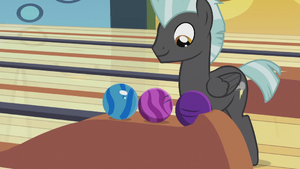