Timber Spruce is a male human who appears as a supporting character in the Equestria Girls franchise. He is a co-director and counselor of Camp Everfree, Gloriosa Daisy's younger brother, and human Twilight Sparkle's love interest.

Timber Spruce has a similar color scheme to "Said Thunderbolt".

Timber Spruce appears in Legend of Everfree as the brother of Camp Everfree director Gloriosa Daisy. He leaves addressing the campers from Canterlot High School mostly to Gloriosa, but when he introduces himself, he makes a brief spectacle of himself. Despite his upbeat personality, however, he shows slight animosity toward his sister, earning the suspicions of Sunset Shimmer. He also mysteriously warns the campers to stay away from the rock quarry.

Timber Spruce takes an immediate romantic interest in Twilight Sparkle, and vice-versa, and while assigning the girl campers to their tents, he flirts with her, and they bond over their shared knowledge of gemstones. Later, when Twilight trips over a splintered plank in the lake docks, Timber catches her and jokingly plays off the encounter. Later still, when the campers are gathered around the fire pit, he tells them the legend of Gaea Everfree, an ancient spirit of the forest.

As he and Twilight grow close, he confides in her that he lived at the camp his whole life and wished when he was younger that his family would sell the camp so they could live in a normal town. Timber considers Twilight special for being the first person he confessed this to.

Throughout the film, Timber has tense moments of disagreement with his sister Gloriosa over the camp activities and the frequent presence of businessman Filthy Rich. Sunset Shimmer becomes increasingly suspicious of Timber after overhearing his conversation with Twilight, his heated arguments with Gloriosa, and hanging out in the forest in the middle of the night. She comes to the conclusion that Timber is trying to scare everyone away with the legend of Gaea Everfree so that he can sell the camp out from underneath Gloriosa.

However, when Sunset views Gloriosa's memories, it is revealed that Timber's true concern was for his sister after she discovered a set of magic geodes and gained the power to control plants. Gloriosa had ignored her brother's warnings that the magic could be dangerous, and she later uses them to transform herself and enclose the camp in a giant dome of brambles. As Gloriosa rises to power, Timber tries to save the campers with an axe but fails, and his tearful pleas to his sister fall on deaf ears.

After Sunset, Twilight, and their friends defeat Gloriosa, Timber reconciles with her over their recent disagreements, and he helps put together the Crystal Gala fundraiser that saves Camp Everfree from being closed. During the Gala, Timber asks Twilight out on a date, which she accepts, and the two have an intimate moment in which they almost kiss before it is interrupted by Gloriosa.

Two depictions of Timber Spruce appear in Mad Twience, the first being a picture of him holding his axe and the second being a silhouette depiction of him.

In the Better Together short Star Crossed, Timber goes on a date with Twilight at the Canterlot Planetarium, but things keep going wrong. They eventually have a romantic moment under a swarm of fireflies. He is also mentioned in the Choose Your Own Ending episode Text Support, having sent Twilight a text message that she has trouble deciphering. In the Better Together beach shorts Aww... Baby Turtles, Unsolved Selfie Mysteries, and Turf War, Timber appears as a lifeguard, and he has a competition with Applejack in the latter.

In the season two short Twilight Under the Stars, Timber is seen at the Canterlot Celestial Society Members' Social, first talking with Sunset and Flash Sentry, and later helping Twilight talk to Rosette Nebula.

In the Dashing Through the Mall segment, Timber is briefly seen at the mall, talking with Gloriosa.

Timber Spruce appears in the chapter book adaptation of Legend of Everfree. His role in the book is much the same as his role in the film.

Smart, strong and ruggedly handsome Timber Spruce keeps Camp Everfree running. While he tries to stay in control as magic is going loose in the camp, he seems to be distracted by one Equestria Girl in particular.[6]

Timber Spruce is depicted in the film as friendly, cheerful, comedic, and slightly self-absorbed. He initially introduces himself to the Canterlot High campers as "that awesome guy who should always be invited to fun things." When Timber meets and interacts with Twilight Sparkle, he teases her and jokes a lot while at the same time mirroring some of her social awkwardness.

Throughout the film, Timber Spruce has tense face-offs with his sister Gloriosa Daisy, resenting how much she overtaxes herself in trying to please the campers. His concern for her only worsens when she uses Equestrian magic to try and save the camp and he warns her against using it. Regardless, Timber cares deeply for his sister, as shown when he tearfully calls out to her after she transforms and when he hugs her when she returns to normal.

Timber Spruce is depicted as being somewhat intelligent, as he is knowledgeable about some gemstones and plants. He is also a little egotistical, as demonstrated when he paints his own face on his lantern, and jokingly tries to take credit for saving the campers during the film's climax.

The Better Together short Unsolved Selfie Mysteries depicts Timber as slightly cowardly, hiding behind Twilight when the "sea monster" appears. Turf War also shows him as having a competitive side, competing with Applejack over who is the best lifeguard.

"Think of me as that awesome guy... who should always be invited to fun things."
— My Little Pony Equestria Girls: Legend of Everfree

"Yeah, but they're mostly blue. That's why they're named after the Latin word sapphirus. [...] [whispering] That means "blue"."
— My Little Pony Equestria Girls: Legend of Everfree

"I know I'm charming, but you don't have to fall for me."
— To Twilight Sparkle, My Little Pony Equestria Girls: Legend of Everfree

"You think that's crafty? You should see my macaroni art. I'm like the Picasso of noodles."
— My Little Pony Equestria Girls: Legend of Everfree

"When I was younger, I wished we'd sell this place so we could live in a town like normal people. [...] I was ten. I really wanted to hang out at the mall."
— My Little Pony Equestria Girls: Legend of Everfree

"Whoever you are, you have to let my sister go! Please, Gloriosa, come back! I need you!"
— My Little Pony Equestria Girls: Legend of Everfree

"Not to brag or anything, but it's pretty cool how I saved all those campers from those Rubus fruticosus. [...] Blackberry brambles."
— My Little Pony Equestria Girls: Legend of Everfree 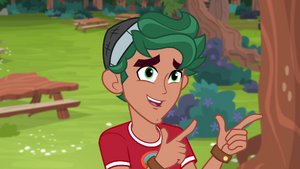 Retrieved from "https://mlp.fandom.com/wiki/Timber_Spruce?oldid=2144929"
Community content is available under CC-BY-SA unless otherwise noted.