My Little Pony Friendship is Magic Wiki
Register
Don't have an account?
Sign In
Advertisement
in: Pages that need improvement, Creatures, Antagonists
English

Timberwolves are a race of wolf-like creatures that first appear in the season two episode Family Appreciation Day. Their name is a play on a real-life breed of wolf, the gray wolf, which is also known as the timber wolf.

Timberwolves bear a resemblance to real wolves, but their bodies are comprised entirely of twigs, logs, and leaves. The timberwolves in Spike at Your Service and The Cutie Re-Mark - Part 2 are of a different design from those in Family Appreciation Day and are animated with 3D computer models instead of the prevalent Flash animation.

At the beginning of the episode Family Appreciation Day, Granny Smith hears the timberwolves' howls and says that their howling is the first sign of the yearly zap apple harvest. Later in the episode, they appear during her story of when she was young: when she ventures into the Everfree Forest one night to collect food for her family, she comes across a zap apple tree and begins to pick its fruit, alerting a group of timberwolves. They proceed to relentlessly chase her until she makes it back home and clangs pots and pans to scare them off.

In Spike at Your Service, Applejack saves Spike from being gobbled up by hungry timberwolves. The timberwolves break into pieces and dissolve into smoke when Applejack foists rocks at them or manages to make them slam into trees and branches. The characters in the episode repeatedly mention that timberwolves have distinctly foul breath. Later in the episode, timberwolves menace Applejack and Spike at the edge of the forest, Applejack drops a large rock on a group of timberwolves and they smash into pieces, but they soon reassemble into a much larger Timberwolf King. Spike defeats this giant timberwolf by throwing a rock into its throat, causing it to suffocate and explode.

A timberwolf costume is worn for Nightmare Night in Scare Master.

In an alternate timeline in The Cutie Re-Mark - Part 2, timberwolves surround Equestria during Nightmare Moon's reign and briefly menace Twilight Sparkle and Spike. On her way to the Cutie Map, Nightmare Moon dispatches the timberwolves easily with her magic. In A Royal Problem, Princess Luna attempts to address three delegates from other towns about a recent timberwolf scare in the White Tail Woods. She ends up convincing them that there are timberwolves there, which was the opposite of her intention. Timberwolves are pictured in a book in The Last Crusade.

Enterplay trading card series 2 cards #31 and #G8 of Timberwolves give the description, "The Timberwolves are a'howling! You might be able to break apart Timberwolves with one good knock on the noggin, but they reassemble themselves lickety split. Worse yet, sometimes a pack will combine into one huge Timberwolf King, and that really spells trouble! Their one weakness is loud, clanging noises, like pots and pans. If a pony gets a whiff of awful bad breath coming from the Everfree Forest, the best advice would be to run for the nearest kitchen!"

In Enterplay's collectible card game, timberwolves are featured on GenCon demo card #46 and premiere card #158, each of which attribute to Spike the quote, "Their bite is worse than their bark...but their breath is even worse!"

On the WeLoveFine T-shirt "Timber Shred", a Timberwolf is depicted tearing through the shirt. 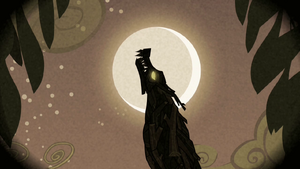