Start a Wiki
watch 00:15
"To Change a Changeling" - 'My Little Pony' Episode Preview
Do you like this video?

To Change a Changeling is the seventeenth episode of season seven of My Little Pony Friendship is Magic and the one hundred and sixtieth overall.

In this episode, Starlight Glimmer and Trixie try to get Thorax's brother Pharynx to accept the changelings' new way of sharing love.

In production order, this episode is season 7, episode 19.

This episode was previously scheduled to premiere on Canada's Treehouse TV channel on June 18, 2017,[1] but was later replaced by a repeat of Hard to Say Anything.

Surprise visit to the hive

The episode begins with Starlight Glimmer and Trixie teleporting to the Changeling Kingdom to pay a surprise visit to Thorax and the changelings. In his letters to Starlight, Thorax has written that not only is he dealing with the responsibilities of being a leader but also the threat of a half-bear, half-mole creature called a maulwurf that keeps eating the changelings' plants. Trixie, however, is skeptical about the existence of such a creature.

Thorax says he has taken Princess Ember's advice to be more assertive and dealt with most of the renegade changelings, but Pharynx is the only one who still refuses to adopt the hive's new way of sharing love. As a result, all of the other changelings avoid him.

Thorax gives Starlight and Trixie a tour of the new Changeling Kingdom. Having abandoned their previous routines of hunting and patrolling, the changelings have adopted a variety of new activities including theater, dancing, arts and crafts, and the occasional potluck. Unfortunately, Pharynx constantly undermines these new ways, upsetting the rest of the changelings. Thorax fears if he can't convince Pharynx to accept love and friendship, it will cause the hive to question his leadership.

While Thorax and his subjects leave to lure the maulwurf away from the kingdom, Trixie and Starlight offer to talk with Pharynx. The ponies approach the rebellious changeling and try to connect with him, having their own experiences with being outsiders among their own kind. However, despite their lives being richer for letting go of the past, Pharynx considers them both losers and tells them to stay away from him.

When Thorax returns, he shows Starlight and Trixie to the changelings' "feelings forum", where members of the hive come together to talk about their issues in a welcoming and open-minded environment. While the participants in the forum feel good talking about their problems, they are also very open about their grievances toward Pharynx. Pharynx enters to find his fellow changelings talking behind his back and voices his own outrage about the hive's weak and cowardly new ways. When Pharynx leaves, the rest of the changelings demand that he be banished from the Changeling Kingdom.

When the feelings forum is adjourned, Starlight regretfully considers the possibility that Pharynx is a lost cause and simply cannot be changed. Trixie agrees, and they decide to tell Thorax that he may have no choice than to banish his older brother. As they leave to talk to Thorax, Pharynx is revealed to have been listening in on their conversation.

At Thorax's throne, Starlight and Trixie try to talk to him about Pharynx, and Thorax tells them a story about his and Pharynx's childhood. When they were little, while Pharynx occasionally made fun of Thorax for his sensitivity, he also protected him from other changelings' similar ridicule. Despite his rebelliousness, Thorax is certain that Pharynx loves him in his own way and that there is good in him. Moved by Thorax's story, Starlight changes her mind about pushing for Pharynx's banishment and comes up with another idea.

Outside the kingdom, Starlight lays a trail of leaves to lure the maulwurf to the hive. Her plan is to have Pharynx save the hive from the maulwurf so that the rest of the changelings will finally accept him. Unfortunately, Trixie cannot find Pharynx anywhere; having overheard their earlier conversation, Pharynx has apparently left the kingdom on his own.

Starlight and Trixie inform Thorax of this development; while the changelings are thrilled that Pharynx is gone, they are terrified that the maulwurf is headed their way. Upon learning that his brother is somewhere alone in the Badlands while the maulwurf is on the loose, he goes to save him, and Starlight and Trixie follow. The rest of the changelings, however, are too scared to also come along. Starlight attempts to rally the nervous changelings with an inspiring speech, saying that while they were forced to follow Queen Chrysalis against their will, Thorax's rule gives them the freedom to choose.

Unfortunately, the changelings are unmoved by the speech, and Starlight, Trixie, and Thorax head out to find Pharynx by themselves. Somewhere in the desert, they find Pharynx battling the rampaging maulwurf on his own. Starlight, Trixie, and Thorax try to help him, but the maulwurf's thick hide makes it impervious to most of their attacks. Suddenly, the rest of the changeling swarm appears to provide support, but they are unable to help much due to being out of combat practice.

Pharynx comes up with an idea inspired by how he used to tease Thorax when they were little, and the changeling brothers team up to make the maulwurf hit itself over and over. When the maulwurf's stamina is worn down enough, it retreats underground.

Thorax asks Pharynx why he challenged the maulwurf if he was leaving the hive. Pharynx explains that he couldn't just let it attack them; despite his distaste for the kingdom's new ways, he still cares about the hive and its safety. The other changelings admit their fault for dismissing Pharynx, saying they still need a protector from outside threats. Pharynx is so moved by the hive's acceptance of him that he transforms into a form similar to theirs.

Starlight apologizes to Pharynx for calling him a lost cause, and Pharynx thanks Thorax for not giving up on him. In recognition of his acceptance of the hive's new ways, he decides to share stories of his and Thorax's childhood.

Starlight Glimmer: On a scale of one to ten, how happy do you think Thorax is gonna be about our surprise visit?
Trixie: Definitely ten. I mean, who wouldn't be happy at the chance to marvel at the overwhelming talent that is the Great and Powerful Trrrrrixie?!

Pharynx: In the old days, I would've already feasted on their love.
Thorax: Well, that's why they're called the "old days", because they're old. We don't do that anymore.

Pharynx: I don't take advice from ponies. The only thing I take from you is breakfast.

Pharynx: The changelings used to be a fearsome swarm! Now we sit around talking about our feelings so much, you can't even stop a maulwurf from eating all your "pretty plants"! I could've sent that thing packing before, but I guess now we'll just try to lead it away and hope that keeps us safe!

Starlight Glimmer: I think he might have to kick Pharynx out. But I don't wanna be the one to tell Thorax that.
Trixie: Me, neither. But somepony probably should. I nominate you!

Starlight Glimmer: Oh, sure, you could all stay here, not help Pharynx and he won't bother you anymore. It's your choice. But remember when you didn't have a choice! When you were forced to obey Chrysalis! You might have been unstoppable, but you weren't free to choose! And now you are, because of Thorax! Well, it's his brother out there, and now it's your chance to prove you're just as strong embracing love as you were feeding on it! Now is your chance to show what changelings can really be! Not because you have to, but because you choose to!

Trixie: That was an amazingly epic speech, Starlight! I just can't believe not a single changeling was moved by it.

Pharynx: You all want me to stay?
Thorax: Unless you still want to leave the hive.
Pharynx: Why would I want that? I love the hive!

Thorax: Lucky for us, you weren't a lost cause.
Pharynx: Lucky for me, you didn't give up on me. 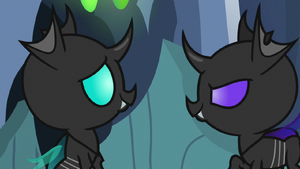 To Change a Changeling image gallery

Retrieved from "https://mlp.fandom.com/wiki/To_Change_a_Changeling?oldid=1896272"
Community content is available under CC-BY-SA unless otherwise noted.